For those that may not have seen the first few posts in this new feature, we have asked the designer of All Bridges Burning: Red Revolt and White Guard in Finland, 1917-1918 from GMT Games VPJ Arponen, to provide us with text of some of the proposed Event Cards and also to give a short summary of the historical background as well as their use in the game. We will plan to post these Spoilers every 7-10 days over the next few months, or even longer if Vez is up for it. We are very grateful for Vez and his willingness to do this for us and for our readers. Thank you for your hard work Vez!

In our 5th Event Card Spoiler post regarding All Bridges Burning, we take a look at card #43 Rough Justice. Please keep in mind that the artwork and layout of these cards is not yet finalized and is only for playtest purposes at this point. Also, as the game is still in development, card details may still change prior to publication. 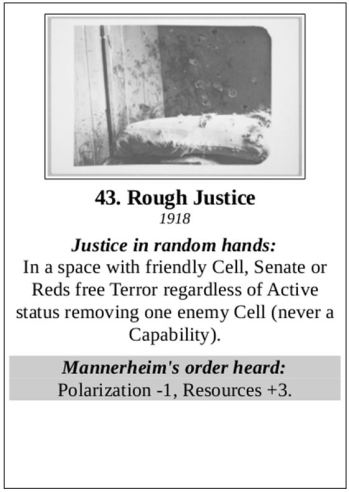 “We’ve had Red terror, will we also have to have White terror as well? The road for it is being paved, the public opinion is being prepared for it.”

This observation was made by the Finnish novelist Juhani Aho in his war time diary on 26 April 1918 as the Finnish Civil War was just coming to its end. The Red Revolt from January 1918 onwards had seen the Red Guards avenge personal retributions on the bourgeoisie which the victors were now gearing up to pay back in kind.

In game play terms, the event Rough Justice embodies one of the key dilemmas with which the Reds and the Senate factions must wrestle with in All Bridges Burning. These factions have every reason to undertake certain destructive actions, such as the free Terror command afforded by the unshaded part of the card. That is to say, as detailed in a recent InsideGMT post (www.insidegmt.com/?p=19354), in All Bridges Burning, terror removes enemies and makes their return to a space with a history of unfriendly terror more costly to the enemy faction. Yet, terror also increases Polarization, and a too high level of mutual distrust at the game end might prevent the Reds or the Senate from winning. I’ve sprinkled the event deck with a number of free Terror events like Rough Justice.

The shaded part of the event hangs like a juicy carrot for the players to bite instead for an opposite effect from Terror: the card decreases Polarization and increases the executing faction’s resources. The precise situation on the board at the time when this event hits the table will decide which side of the event is more likely to get played. Either way, the decision is likely to be tough and leave the player with a sense of missed opportunity regardless of which side of the event they choose to play.

Much discussion has been had over the role of the commander-in-chief of the white Senate army, C.G.E. Mannerheim, in the context of the Senate army terror. In February 1918, Mannerheim and the Senate army issued the so-called “shoot-on-the-spot” declaration (“ammutaan paikalla -julistus”) justifying the Senate forces to execute captured enemies on the spot if they were judged to have been involved in certain kinds of violations. The declaration was vetted for legality in the context of an unclear transitional constitutional situation from the Russian Tsarist to independent Finnish law. In practice, the declaration seemed to give the Senate army field commanders relative freedom to dispense justice as they saw fit. Retributions quickly got out of hand and continued even after the end of the Finnish Civil War in May 1918. The situation was recognized by the Senate leadership, but despite repeated orders, it turned out to be difficult to maintain discipline among the troops.

Next card up in the series will be #45 Finland’s Fate Hangs in Balance.

You can also catch up on the series by following these links:

#27 The Reds Launch a Major Offensive

If you are interested in All Bridges Burning: Red Revolt and White Guard in Finland, 1917-1918, you can pre-order a copy at the following link: https://www.gmtgames.com/p-675-all-bridges-burning-red-revolt-and-white-guard-in-finland-1917-1918.aspx

Also, check out our interview with the designer VPJ Arponen to get better insight into the game.