For those that may not have seen the first few posts in this new feature, we have asked the designer of All Bridges Burning: Red Revolt and White Guard in Finland, 1917-1918 from GMT Games VPJ Arponen, to provide us with text of some of the proposed Event Cards and also to give a short summary of the historical background as well as their use in the game. We will plan to post these Spoilers every 7-10 days over the next few months, or even longer if Vez is up for it. We are very grateful for Vez and his willingness to do this for us and for our readers. Thank you for your hard work Vez!

In our 8th Event Card Spoiler post regarding All Bridges Burning, we take a look at card #25 Disarming Russian Garrisons. Please keep in mind that the artwork and layout of these cards is not yet finalized and is only for playtest purposes at this point. Also, as the game is still in development, card details may still change prior to publication. 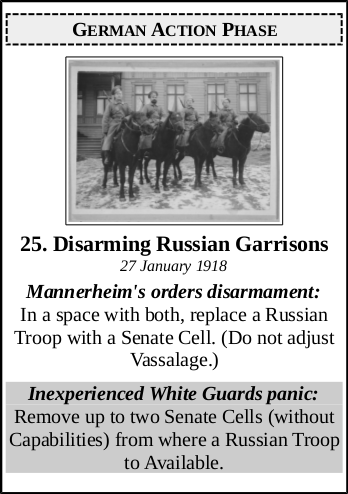 One important source of weaponry in the Finnish Civil War were the many Russian garrisons existing in the country. Until the declaration of independence in December 1917, Finland had been a semi-autonomous province of Tsarist Russia. An estimated 40,000 Russian troops were stationed in Finland in January 1918 when the Reds launched their revolt.

The rumor mill ran wild as to how these garrisons would react to the events in Finland. The fear among the Senate forces was that the Russians would join the Red Revolt and suppress the bourgeoisie efforts to defeat the working class revolt. The Senate propaganda made everything out of the Russian threat to Finnish independence to motivate the undecided Finns to join the Senate cause.

The reality, however, was that the Russian forces in Finland were effectively paralyzed. They unstable political situation in Russia left the Russian army in a state of confusion as to who was in charge back home. Following the abdication of the Tsar in February 1917, three changes of government occurred in Russian in the course of 1917 and the country was moving toward a civil war of its own. The Russian army personnel were faced with the tough choice of which of the competing factions to side with. The foot soldiers tended to support the working class while many of the officers held Tsarist sympathies. In some instances, Russian officers in Finland actively helped the Senate forces to gain access to the weapons of the Russian garrisons. These Russians were motivated by a fear of their fate in the event of a working class uprising.

Many Russians in Finland waited and did nothing, or deserted and went back home to Russia. Discipline in the army was disintegrating. Rogue individuals in the Russian garrisons sold weapons and other military materials to anyone who’d be willing to pay something for them. The class tensions existing within the Russian army gave rise to bloody incidents of soldiers turning against their superiors.

The Disarming Russian Garrisons event card highlights an episode from early 1918. The Senate leadership based in the northwestern stronghold town of Waasa and the surrounding province of Pohjanmaa faced a decision as to what to do about the Russian garrisons in the area – an estimated 5,500 troops but which were dispersed in smaller contingents. One such contingent was located in the village of Laihia, just 15 miles or 25 kilometers outside of Waasa.

#27 The Reds Launch a Major Offensive

If you are interested in All Bridges Burning: Red Revolt and White Guard in Finland, 1917-1918, you can pre-order a copy at the following link: https://www.gmtgames.com/p-675-all-bridges-burning-red-revolt-and-white-guard-in-finland-1917-1918.aspx

Also, check out our interview with the designer VPJ Arponen to get better insight into the game.