Fields of Fire is an older solitaire only game that got it’s Second Edition printing in 2017. I’d had my eye on it for a while because I enjoy solo gaming and was told this was one of the premier solo games, for those looking for rich, detailed, simulation. When it showed up on my doorstep I was really excited. It came in this great 2 inch box, and had the original box art still which gives the game an old school look on the shelf. And then I opened it up!

If you’re up for a good laugh, you can watch me open it up and butcher the unboxing of this one. It became readily apparent that I was out of my depth, because this game has a massive rulebook akin to Empire of the Sun. Now, there’s nothing inherently wrong with that, I just had no idea that was what I should have been expecting. Frankly I had no idea what to expect. I had just heard it was solitaire only and it was one of the very best solo games out there. I quickly realized why.

So what is Fields of Fire? Well, it’s a game where you take control of a full company of infantry and execute missions in a number of different combat situations. You will always play as the Americans, but the game covers WWII in northern France, the Korean War – fighting communists – and then Vietnam where you will campaign against NVA and VC forces. For a game to cover all of these wars with a single ruleset, it must necessarily be at least somewhat involved. And so in pouring through the rule book, and glancing at the play book, it can be easy to get discouraged at the volume and density of the rules. There’s a lot of crunch. There’s a lot of moving parts. But once you get all the parts down and get to the playing, the depth, richness and realism in the game is truly astounding. 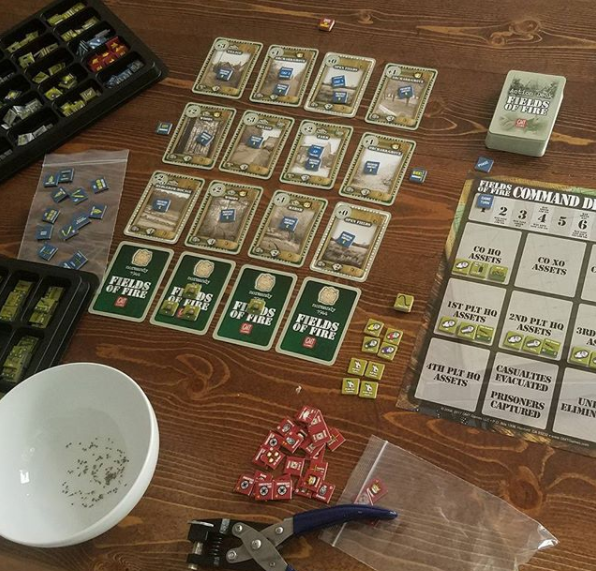 First off, we’re going to start with the board, or lack thereof, I should say. You’ll notice right out of the box there’s no traditional game board or tactical display for your forces to be arrayed on. The game is played on a grid of terrain cards which are laid out in a particular configuration based on the scenario. The first mission starts with a 4×4 grid, and you adjust the deck of terrain cards (removing some per scenario instructions) then randomly deal them out. Immediately you can see not only the layout of the battlefield, but the immeasurable levels of replayability in the box. If you played the same mission 10 times you’d never have the same experience because the board would be so wildly different each time.

And don’t worry, each different campaign has it’s own terrain decks. So you don’t get bocage showing up in Vietnam or bamboo grass in Normandy.

Round Up The Troops

Your forces, a full company, will start with a CO and XO, and some staff attachments with three platoons of men, each divided into sections, or teams. Before the game starts, your various leaders and platoons have a special board over to the side of the play area that contains holding boxes for their respective assets. In this box, you’ll have things like radios/field telephones, different coloured smoke and signal grenades, heavy weapons and a number of other items depending on the scenario.

This reduces clutter on the terrain cards, as you’ll typically have only the section/team counters on the terrain cards along with some administrative markers. Now, each of these assets has it’s own section in the rule book and will play vital rolls in communication between platoons, assaulting enemy positions and achieving the scenario objective. With this in mind it’s really important to know what each item does. So read the rule book…thoroughly! That might seem like an obvious piece of advice but I feel like I need to say it anyways. There are some games out there like Ranger or Ottoman Sunset which can be set up and learned as you play. Fields of Fire is not one of them. I’d recommend blitzing through the rule book (it’s 50 pages) and then setting up the game and playing through with the rulebook by your side. You’ll never remember everything from the initial read, but a foundational knowledge will help the basics go smoother.

Once you get the game set up and start really getting into the meat of the game, however, you’ll quickly find a solitaire system as rich as it is complex. Laden with rules, Fields of Fire gives an unending variability in play-throughs and specific and realistic activity to the enemy positions that pop up. I liken the game (especially the Normandy campaign) to watching an Episode of Band of Brothers. You control a full company with some extra support, and each team will have to contribute in order to achieve your goals. Planning is an important concept in Fields of Fire. Starting with all of the differently coloured smoke signals, to which you’ll assign movement orders and maneuvers, and finishing up with trying to have a solid tactical plan once you see the layout of the terrain.

The great part about this solo system is that truly no plan will survive contact with the enemy. I try to make fool proof plans, but this game invariably will force me to adapt on the fly and end up doing things I could never have foreseen. What was it that Dwight D. Eisenhower said? “Plans are useless, but planning is indispensable!”

I don’t want to get into the great debate of realism/simulation vs. a playable game in this review, but this game flirts with that line perfectly. Yes it’s dense, but everything that happens to you and that you can do gives the impression of being undeniably real. And by real I mean (here’s that reference again) Band of Brothers real. The teams, platoons, and commanders, each will be asked to put themselves on the line in the face of an unpredictable yet deadly enemy. I remember my first ever game, I intended to perform a strong pincer maneuver and use one platoon to attack from the right flank. Their first move into a marsh terrain led them in the path of zeroed in enemy artillery position. They were promptly annihilated. 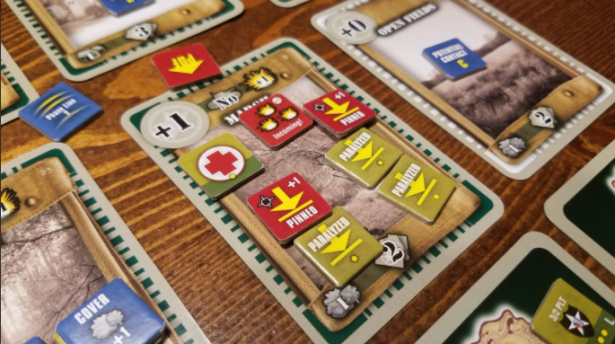 It was at that point that my mission changed. I no longer needed to capture some field four spaces away, I needed now to pull those men out of that marsh and save whomever I could. I had to use a team to go and attack the spotter to stop the artillery, and then send other teams to go and bring stretchers to take away the paralyzed men and other casualties. It was an utter disaster from a primary goal standpoint (this was literally turn 2 of the game) but dammit, if it didn’t make an unbelievably engaging game and a great story.

I love solo gaming. I should get this, right?

From a quality standpoint the answer is a resounding yes. This game, for me, is a wargaming classic. Now, with that said, this game isn’t for everyone. I had to wrestle with the rules at times simply from a volumetric standpoint. There’s a lot of stuff to remember, and each situation has different interactions between rules. I’m not overstating this, or using hyperbole when I say that this is Empire of the Sun style when it comes to the learning curve. As an example, each different coloured smoke grenade is assigned a different company/platoon maneuver. That you decide. There’s just a ton to learn before you even start playing effectively. But where a lot of complex games fall flat, Fields of Fire rises triumphant. The pay off in the style of play, the rich narrative and deep tactical decision making has this solitaire game on a whole other level.

I’ve played a lot of solo games, and one thing I hear people say is that they love the stories that come out of solitaire play. Games like Target for Today and Silent Victory lend themselves to cool, dynamic stories that you will remember through the ages. A lot of the time however this comes at a sacrifice of meaningful decision making. In both of those games you make a couple of planning decisions but there comes a point where the game happens and you’re just along for the ride. The ride is fun, and there’s nothing wrong with that, but for some it’s a little unsatisfying, which I totally get. Conversely, some games get bogged down in the mechanics and tactical decision making and end up being so dry and unplayable that it saps the fun out of a solo game. Like. Why am I not just doing a complex puzzle?

Fields of Fire flirts the line between these two extremes perfectly. This is one of those games where you have full tactical control and every decision has serious consequences, yet weaves a beautiful, high powered, and rich narrative. And it’s from this balance that I recommend this game. If you’re willing to put the time in, this game will give it all back. This is truly a desert island game for me.

10 thoughts on ““We Few, We Happy Few!” – A Review of Fields of Fire (Second Edition) from GMT Games”