A new year has started and I have already blown my resolutions. Eating better, exercising more, spending more time with friends and family, reading….the list goes on and on. But there is one constant in my life that is always dependable and never lets me down and that is GMT Games. They always have something good cooking and this month was no different with the Monthly Update email. Not a month that blew my socks off with it’s new information, new games and the like but definitely dependable.

There were two new P500’s announced this month but lots of good information on other games in the works.

In case you missed the Monthly Update email, here is a link: https://mailchi.mp/05c9bd3a7ca3/january-23-update-from-gmt-new-p500s-new-releases-art-samples-and-more

Also if you are interested in my thoughts on the December Monthly Update you can read that post here: https://theplayersaid.com/2019/12/23/december-2019-monthly-update-from-gmt-games-do-you-want-to-become-a-great-statesman/

There were two new P500’s added this month with one being an American Civil War game and the other a new and updated Bot for one of my favorite games of all time.

Great Battles of the American Civil War Volume VIII Into the Woods: The Battle of Shiloh

Into the Woods: The Battle of Shiloh is the eighth installment of the Great Battles of the American Civil War (GBACW) series, which is an amazing accomplishment in this day of new systems and new games grabbing most of the attention. Under GMT, the GBACW rules system has remained stable, but at the same time has shown remarkable flexibility to allow each game to smoothly incorporate additional rules to reflect the specific elements of the historical battles that make each battle so unique. The series relies on interactive chit-pull mechanics to simulate the often chaotic nature of the 19th Century battlefield at the regimental level.

Into the Woods: The Battle of Shiloh includes ten scenarios. They range from division level contests on half sized maps to two-map battles depicting both the first and second day of the struggle. Experienced players will be able to play many of the scenarios in one sitting. The game reflects the Confederate surprise, the “greenness” of many units on both sides, as well as the unique role Albert Sidney Johnston played in the Confederate attack.

This one is a big game as it does include 1,120 counters and two huge 22″ x 34″ double sided maps. This game does have a new designer on the project but is supported by a veteran developer and co-designer in Bill Byrne who did such a good job on the Death Valley: Battles for the Shenandoah project.

If you are interested in Great Battles of the American Civil War Volume VIII Into the Woods: The Battle of Shiloh you can pre-order a copy for $40.00 from the GMT Games website at the following link: https://www.gmtgames.com/p-855-into-the-woods-the-battle-of-shiloh.aspx

Many of our favorite multi-player wargames are difficult to get on the table to solo play as there are just too many factions to control. It can be done but less than ideally. Over the past few years, published like GMT have put a lot of time and resources into addressing this problem as they have developed a system of solitaire bots that control 1, 2 or even three of the factions in a game allowing us as players to focus on just one. They have now developed a more robust and functional AI Bot for Fire in the Lake and are calling it Tru’ng. This Bot was designed by Bruce Mansfield, the designer of Gandhi and it’s Bot named Arjuna.

Tru’ng is the name of a new bot system for Fire in the Lake. It follows in the footsteps of the innovative card-based bot system that was first developed for Gandhi, giving fans of Fire in the Lake more opportunities to get this great game to the table.

Tru’ng is quick to use and easy to implement, but is sophisticated enough to play the full Fire in the Lake game. When selecting Operations and Special Activities, cards are drawn from the Tru’ng deck—there are six cards for each Fire in the Lake faction. Each card examines the current state of the game and selects the appropriate action for the active faction. A single, faction-specific table then determines where that action will occur. The same table is used to select spaces for Operations, Special Activities, and Events, minimizing the need to flip between multiple player aids.

If you are worried about whether the solo bot feels right when playing here is a comment from the game page:

Playing against Tru’ng feels like playing against a human opponent. It is unpredictable yet responsive to strategic needs, it goes after its enemies while keeping an eye on its ally, and makes moves up to now limited to human players—like choosing a Limited Operation to block an opponent’s Event. Tru’ng can take the place of a human player for any Fire in the Lake faction, can be used with every Fire in the Lake scenario, and can be used in any combination of player and non-player setups.

If you are interested in the Fire in the Lake: Tru’ng Bot Update Pack you can pre-order a copy for $17.00 from the GMT Games website at the following link: https://www.gmtgames.com/p-856-fire-in-the-lake-trung-bot-update-pack.aspx

As we have seen in the past, GMT sometimes imports overseas games to make them easily accessible to the US market and will occasionally stock these small company games that they think are interesting to us gamers.

This month they have announced that they have both an import and the first game from a small company. The Battle of North Kursk is from Kuro Neko, well known as the publishers of Richard Berg’s The Dragon and the Cross. They also have the first game design from Companion War Games and Mark Scarbrough. They have a prior relationship with Mark and thought that his game Waterloo: Napoleon’s Last Battle was worth offering. Note that this is a very limited print run, so get yours now if you want one!

The links below will take you to the game pages on the GMT Games website for more details or to order.

As I mentioned last month, I have not had very good luck in my guesses for this segment the past few Updates but I will not give up, in fact, I refuse to admit defeat. I will simply have to try harder. This month, here is the information shared by Gene with my guesses next to each item:

Here is a brief tease for P500 additions lining up in the coming months. Note that this is not a comprehensive list, so I will switch these up a bit from month to month. My November hint of “A new American Civil War battle game” referred to this month’s new Into the Woods: The Battle of Shiloh. December’s hint of  “A “Bot Update Pack” for one of our COIN games” referred to this month’s new Tru’ng Bot Update Pack for Fire in the Lake. Over the coming 1-6 months, I anticipate that we will add:

Feel pretty good about at least 2 of my guesses. How did I do Gene?

They hope to finish shipping all of these titles by mid-week this week.

The next P500 shipment will begin roughly around January 30th and will include the following products:

As I always tend to end these posts, I will post a summary of where my 38 P500 games stand as of January 28th. I routinely check the status of each of my games and also will show the change in orders as compared to the last time I wrote them down on December 20th.

We have always loved GMT Games and their games. In fact, as many of you know, they were our attraction back into wargaming and I really love their approach and the types of games that they decide to publish. We have several GMT Games from 2019 left to play, including Nevsky, Red Storm and Stalingrad ’43, before putting out our Top Games of 2019 list but I can already tell you that GMT will most likely have 4 or 5 spots on that list! Here’s to the greatest publisher in the world!

In conclusion here is some info from the Monthly Update on the upcoming 2nd Annual INsurgency in INdianaplis at GenCon:

The Wargamer’s INsurgency at Gen Con needs you!
Harold Buchanan, The Player’s Aid Blog and others are going to be back at the Wargamer’s INsurgency at GenCon 2020 (July 30 – August 2, 2020). The goal is to bring board wargaming back to the convention that started with board wargames! GMT will be supporting Harold and the INsurgency with demo games, prizes, and several GMT team members who’ll be there to teach games or lead events. 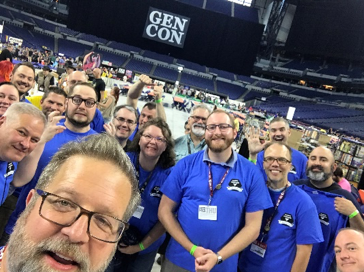 The Wargamer’s iNsurgency needs you! Are you willing to host an event? If so, contact Harold Buchanan at buchananhg AT gmail.com . Feel free to contact him if you are interested in getting involved in any way. You can also stay informed at https://conflictsimulations.com or on the Facebook page https://www.facebook.com/groups/wargamersinsurgency .

We would really like to meet many of your at this event so please take a look and consider stopping by, running an event or playing in one. Thanks to Harold Buchanan for all of his hard work on this event. You da man Harold!