Another month, another update. I’ve said it before but I live for them. When the update hits my inbox, it is like a surge of excitement courses through my body as I just know that I am going to be blown away! This month’s update had only one new P500 game being offered, but that is fine with me. It also briefly mentioned the infamous and elusive Annual Sale that I have heard so much about over the past 2 years but have yet to experience myself. I feel that the Annual Sale exists only as an urban legend, that is spoken of in whispered tones in darkened corners. I actually think that I have seen Bigfoot, which is surely a very rare occurrence if you believe that sort of thing, but evidently not as rare as this Annual Sale. I have purchased multiple P500 games since early 2016 and will definitely be interested in buying some games that I have wanted to add to my collection at a reduced sales price. I jest here as I know that GMT Games has been working hard on new systems and processes and that they have had to put something on the back burner in order to continue with making great games. That was the Annual Sale but there is now light at the end of the tunnel! I may get to yet experience it.

Onto the news for the month!

From designer Jerry White (Enemy Coast Ahead: The Dambuster Raidand Enemy Coast Ahead: The Doolittle Raid), Atlantic Chase simulates the naval campaigns fought in the North Atlantic between the surface fleets of the Royal Navy and the Kriegsmarine between 1939 and 1942. It utilizes a system of trajectories to model the fog of war that bedeviled the commands during this period. Just as the pins and strings adorning Churchill’s wall represented the course of the ships underway, players arrange trajectory lines, using colored wooden sticks, across the shared game board, each line representing a task force’s path of travel. Without resorting to dummy blocks, hidden movement, or a double-blind system requiring a referee or computer, players experience the uncertainty endemic to this period of naval warfare. This system also has the benefit of allowing the game to be played solitaire, and to be played quickly. 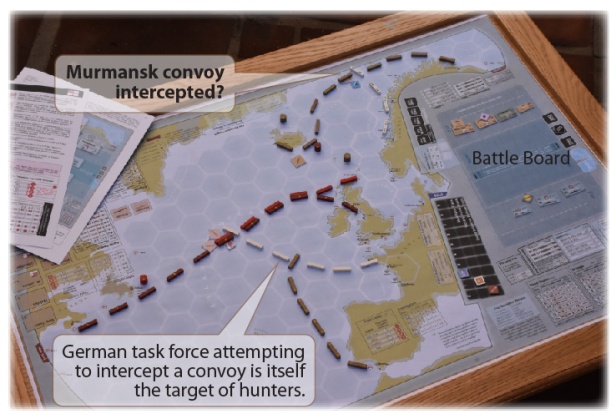 The really interesting part of this game is that there are no traditional turns. The player that has Initiative will activate their taskforces to take actions and do so until they lose the Initiative. The game will continue in this fashion until the operations are completed. Battles will be hard to initiate, as you must first find the enemy, and they are not long or overly involved as players will have various tricks at their disposal including aerial searches, aerial attacks, evasive maneuvers and break away attempts.

The game comes with counters but also with wooden “sticks” and cylinders for each player representing their task forces. Players will not know what each taskforce contains as the ships included will be contained on a hidden off board display. I must say that this game looks very interesting and I am ready to do some research into the game mechanics so I can get a better feel for how it all works. But, it looks very intriguing and I will add it to my P500 list. Alexander has already reached out to Jerry for an interview. Look for that upcoming!

If you are interested in Atlantic Chase, you can secure a copy for the reasonable P500 price of $45.00 at the following link: https://www.gmtgames.com/p-706-atlantic-chase.aspx

This has been a new feature for the Monthly Update over the past few months and has been quite fun to try to prognosticate. This month, the following information was shared by Gene, with the first 3 being holdovers from the March report:

Thus ends my guessing. I am pretty positive I have at least 1 right, with a possibility for 2. We will have to wait and see. What are your thoughts on my guesses?

Thanks to GMT for What they do for Content Creators

I would be remiss if I didn’t take this chance to wholeheartedly thank GMT Games for their benevolence and kindness, particularly to us content creators that love their games and love to share them with you. As they are want to do, in the Monthly Update, they included links to some of our stuff. In this case, a highlighting of our recent video review of At Any Cost: Metz 1870 in the Around the Web section. 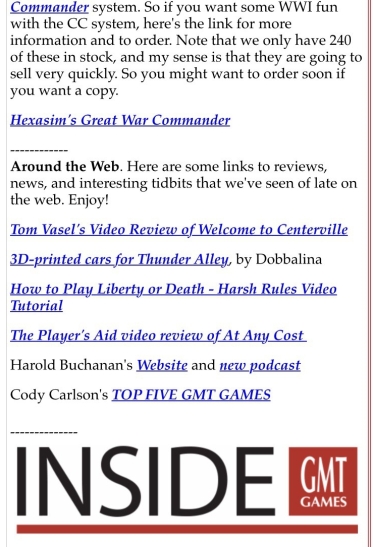 It is amazing to see that GMT understands what it is that we do for the community and how our content has to be shared to be effective. I can write the most eloquent blog post you will ever read, but if you don’t see it, it won’t help anyone. GMT has always been fantastic about this and we, both Alexander and I, are very appreciative of that fact! There are a lot of talented content creators out there and I have been turned onto several because of GMT and I really appreciate that fact as well. I love to read other people’s stuff and see what their thoughts are on games that we have in common. It expands my mind, helps me to think about things more critically and provides energy and inspiration to get out there and continue what we are doing!

This little tidbit was hidden away in the Monthly Update, but it is news on a siting for the fabled Annual Sale! Here is what Gene had to say about it:

“I should be able to give you specific details on the new website and our yearly sale (which we’re planning for as soon as possible this summer) in that update.”

I know it wasn’t much, but it is something. So take that for what its worth!

I don’t know if you really care about this list, but as I always tend to end these posts, I will post a summary of where my (now) 33 P500 games stand as of April 26th. I routinely check the status of each of my games and also will show the change in orders as compared to the last time I wrote them down on March 27th.

Another great month, although without many new P500 offerings, but the one that was offered looks intriguing and has had a good response already. I am really looking forward to the months of May and June, as no less than 10 games will be mailed out to us happy gamers. May will be very busy with 4 games, including Cataclysm, Fighting Formations: Kharkov, Fort Sumter and Gallipoli, 1914 but June will be good as well, with 3 games, including Hitler’s Reich, No Retreat 3: The French and Polish Fronts and Skies Above the Reich. It is a great time to be a gamer and it is great that GMT Games is who they are.