I love surprises and each month I wait with baited breath when the Monthly Update email comes out from GMT Games. It absolutely is just like Christmas morning for me as I open that email and begin looking around. What new games are being added to the P500 this month? What designs are coming our way? What tidbits about the hobby is going to be shared? I even ask myself about what future P500 hints Gene will be giving us as well and whether I have some hot intel that will help me out in guessing.

Well, this month didn’t disappoint! Two new P500 games were added with a third addition being a reprint of a game that I have had my eye on for a while now as we have recently really become more interested in the ancients.

Here is a link to the Monthly Update email in case you missed it: https://mailchi.mp/7678a5819ea4/may-21st-update-from-gmt-new-p500s-new-digital-release-sneak-peeks-and-more

As I mentioned in the introduction above, there were two new games offered up on the P500 this month. One is an 18XX game called 1848 Australia and the other is a real treat Labyrinth: The Forever War, 2015-? and really has me salivating to give Labyrinth and Labyrinth: The Awakening another play real soon. It has been nearly a year since we last played this fantastic game, and frankly, that is too long!

Labyrinth was our 2nd ever played game from GMT Games (Twilight Struggle was the 1st) and it set us on an interesting journey through title after title over the past 6 years or so. The game holds a special place in our mind as one of the most fascinating and well done simulations of current events in the world as it has now added a few expansions to deal with new developments in the war against terror, including the first expansion Labyrinth: The Awakening, 2010-? which added 120 new event cards and some interesting new mechanics and spaces and now this new offering which brings more recent events to the game (can you say Twitter President?). From the game page we read the following about the expansion:

Labyrinth: The Forever War, 2015 – ? is a 1-2 player card-driven boardgame simulating at the strategic level the ongoing bid by Islamist extremists to impose their brand of religious rule on the Muslim world. It continues where Labyrinth: The Awakening, 2010 – ? left off and adds new event cards and rules to cover the last five years of history. Since publication of Labyrinth and its first expansion, fans of the game have expressed a desire to update it based on more recent events, and a variety of event card ideas and variants have been freely shared online. This second expansion to the Labyrinth game series fulfills that continuing interest by providing up-to-date event cards and allows the game to continue to serve as an effective strategic level model of the ongoing struggles in the Muslim world. 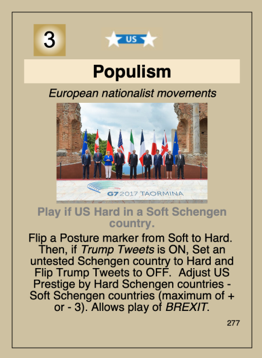 This expansion uses the exact same rules, victory conditions, map, components, and charts as the original game and expansion and as such you’ll have to own both Labyrinth and Labyrinth: The Awakening, 2010 – ? to play. From the game page we get the following additional insight into the events covered:

Much has happened in the Muslim World since the end of the Labyrinth: Awakening event deck (roughly 2015), with a number of sub-themes across the globe that give rise to a new narrative that has been playing out over the last five years; these include:

Growth and then Collapse of the physical Islamic State Caliphate

Increased Russian and other International involvement in the Middle East

Incredible violence outside the Middle East from ISIL and others across Europe, New Zealand, Sri Lanka and elsewhere

Emerging Main-Power Rivalry between the US, Russia, China, EU and the UK

The expansion comes with four scenarios, two of which can be linked to the previous games to allow up to 360 event card combinations for near endless variety and discussion. I am very interested in trying out “Epic” Labyrinth and I look forward to seeing how this works. The solitaire system has been upgraded and will allow play for both sides and will include updates to the Bots for all three games in the series. This one is an auto P500 for me, especially since the price is so very affordable. I actually don’t see how they are making money on this one but that is not our problem, we simply will get more of one of the best games of all time at a rock bottom price. I am also really not surprised that the game made the cut in the first 24 hours and now has over 600 orders. 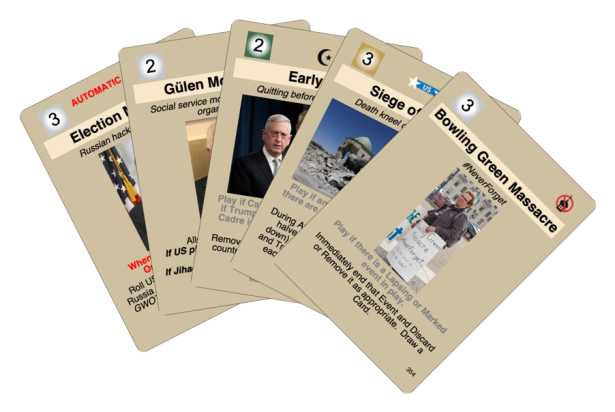 If you are interested in Labyrinth: The Forever War, 2015-?, you can pre-order a copy from the GMT Games website for $19.00 from the following link: https://www.gmtgames.com/p-769-labyrinth-the-forever-war-2015.aspx

We have reached out to the designer Trevor Bender and he is willing to do an interview with us. I am currently working on the questions for him and want to provide you with an opportunity to ask anything that you are interested in knowing so let me know.

I am not a true fan of 18XX games. I have played 1846: The Race for the Midwest from GMT Games but no other titles. I will tell you that I enjoyed my experience with the system, and actually had a lot of fun, even though our game lasted nearly 6 hours. We chalked that up to being noobs with the system. This is now the 3rd 18XX game being published by GMT Games and if they do as good a job as they did with 1846, this one will be a really interesting game. From the game page, we read the following:

1848: Australia is a semi-historical railroad game for 3 to 6 people. It is based on the game 1829 by Francis Tresham. Historical constraints have, as far as is possible, been taken into account. In other areas, history will be written anew. 1848 features the inclusion of The Bank of England as a public company that extends loans and administers railroads that are in receivership, dealing with the different track gauges between states, and ‘The Ghan’ special train.

One of the things that I really enjoyed about 1846 was that it was specifically designed for the “new to 18XX crowd”, which meant that it was simpler to play and understand and could also be played in 3-4 hours (note above that our game lasted nearly 6 but I blame that on Alexander and Tim!). It appears that 1848 is at least in this same mold as we read the following from the game page:

1848 has simple mechanisms at its base. The yellow, green, brown and grey tiles are placed on the map to form a network of routes, connecting stations together. The trains (train cards) make notional journeys from station to station, thereby earning money. The (imaginary) travellers pay for their journeys. The more and more important the stations a train visits, the more money it earns for the company and its shareholders.

In the game, you and your fellow players will own 6 Private Companies, shares in 8 Public Companies, as well as shares in The Bank of England. The Public Companies belong to their shareholders. The player with the most shares in a company is its Director and decides what the company will do. You will operate your companies, invest in others, buy better trains, and compete for routes. At game-end, players compute the value of their shares and add that value to their operating profits to determine their total wealth. The player with the most wealth wins.

I think that this may be one that I go ahead and back as it looks to be pretty easy to pickup and will move me along the continuum of difficulty with 18XX games. Who knows. One day, I might be really into 18XX but for now, I like to play good games.

If you are interested in 1848: Australia, you can pre-order a copy from the GMT Games website for $50.00 from the following link: https://www.gmtgames.com/p-768-1848-australia.aspx

As I have said before, this is one of the my favorite parts of the Monthly Update, especially when I feel that I might have some idea about what the games are. Well, this month, I think I am sure about 2 of the hints, possibly 3. So, here goes.

Those are my guesses for the New P500s on the Horizon….and I really feel like I was 5/5. Right Gene? Maybe….

Playdek Releases Digital Fort Sumter as of May 21st!

You read that right. You can now download a digital copy of Fort Sumter for your Android and iOS devices and on Steam (PC/Mac). The game is really well done graphically and musically and plays great. The AI is a bit easy to defeat but you will find your most value from being able to play a real life human opponent. To date, I have played the game 24 times against the AI and am a combined 21-3 (10-1 as the Unionist and 11-2 as the Secessionist). The game is really great and I am looking even more forward to the upcoming Labyrinth and COIN Series games. Please hurry up Playdek!

Commands & Colors: Medieval  (We played this on Saturday and really enjoyed some of the new additions to the system including the Inspired Action Tokens and Leadership events which are really powerful.)
Fields of Fire Volume II: With the Old Breed (Don’t have our copy yet….)
Holland ’44 Mounted Maps (I really want a mounted map for this game!)
The Last Hundred Yards (We got our copy last week and haven’t had a chance to do anything with it.)

The next P500 shipments will be in roughly 10-14 days, when they’ll start shipping Gandhi.

It’s possible, just depending on when Peloponnesian War arrives in the warehouse, that they could ship it along with Gandhi. If not, it’ll ship as soon as they finish the Gandhi shipment (it should take about 10 days).

Charging.  GMT charged for Peloponnesian War on May 19th.

As I always tend to end these posts, I will post a summary of where my 34 P500 games stand as of May 28th. I routinely check the status of each of my games and also will show the change in orders as compared to the last time I wrote them down on April 26th.

I also wanted to include at the end of this post our reviews/interviews/unboxings of recent GMT games that we have played and enjoyed:

Interview with Gary Weis Chief Technology Officer with Playdek (By the way, have you downloaded digital Fort Sumter yet? Well, what are you possibly waiting for?).

7 thoughts on “May 2019 Monthly Update from GMT Games – Labyrinth Gets an Expansion!”