This month, the update from GMT Games really snuck up on me! I have been very busy at work with year end revenue projections, performance reviews, contacting new clients to get meetings setup after the first of the year and finishing projects. But, when I got home late Wednesday evening, there it was in my inbox and I was very pleased with the things that I saw inside including several new P500s and other good information on upcoming titles.

In case you missed the Monthly Update email, here is a link: https://mailchi.mp/ceaa9a834e40/november-20-update-from-gmt-tribute-to-chad-new-p500s-more

If you are interested in my thoughts on the October Monthly Update you can read that post here: https://theplayersaid.com/2019/10/25/october-2019-monthly-update-from-gmt-games-good-things-come-in-3s-fall-sale-soon/

Before we get to the meat of the update, I wanted to share Gene’s thoughts on the passing of the great Chad Jensen. I always feel a bit uncomfortable with commenting on these type of situations as I didn’t know Chad or have any interaction with him. Never met him, as I still haven’t attended a Weekend at the Warehouse event, nor did I ever do an interview with him. But, I have played several of his games, namely Combat Commander, Dominant Species and Welcome to Centerville. And I can tell you I got a glimpse into his character and mindset and I am sure that I would have liked him if I knew him. Here are Gene’s comments from the update:

It’s a sad time here at GMT and for many in the broader gaming world. As many of you know already, late last week Chad Jensen passed from this life after a fierce battle with cancer. For those of us who knew Chad well, his passing leaves a huge hole in our hearts. Chad was certainly a giant among game designers, but more importantly, he was a devoted husband, loving father, and faithful friend. If you got to know Chad Jensen, or even if all you knew of Chad was what you gleaned through playing his designs, you were well and truly blessed.

I love this picture of Chad that Michael Arrighi took at a Weekend at the Warehouse from April 2013. Here he is, happily playing another designer’s game (as he often did) among GMT family, with stacks of his own designs behind him, wearing that trademark Chad grin with a sparkle in his eye. He was full of life and good health, enjoying playing games with Kai and his many friends. That’s definitely one of the ways I want to remember him. 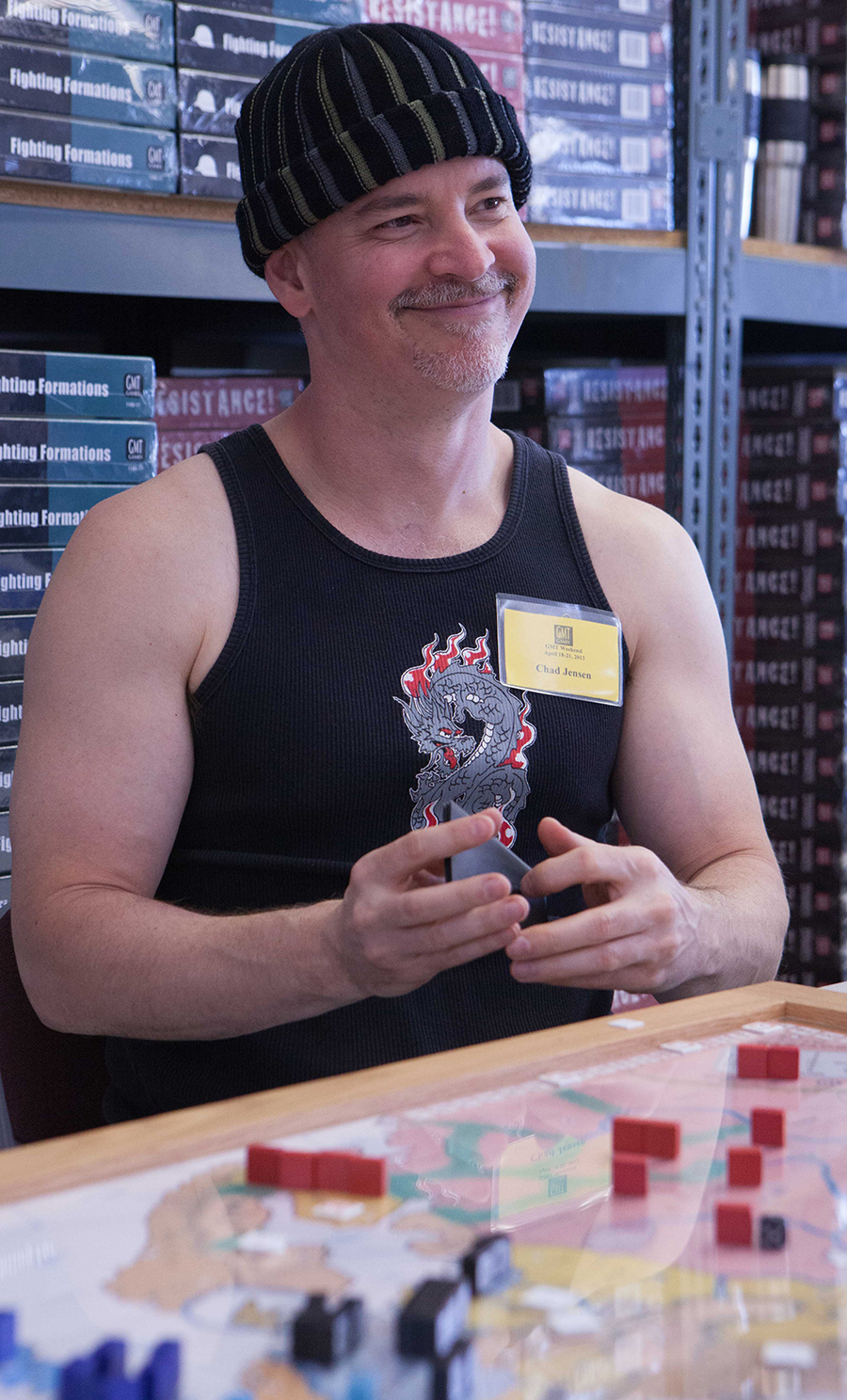 Future Projects with Kai. I know from your many online comments and queries that many of you are deeply interested in what we’re going to do with Chad’s games going forward. This is not the right time for a detailed discussion of that, but the short answer is “we’re going to do whatever Kai wants to do.” She is a member of our family, and we are going to do our best to continue to provide an environment where she can do as much or as little as she wants to continue to support Chad’s work and that of GMT. She and I have discussed this briefly, and we are in agreement on general direction.

So you will see us continue to publish and produce Chad and Kai’s Combat Commander series with both reprints and, as we have new material, expansions. And Kai and Chad talked in these last weeks about the small amount of remaining work to be done on Dominant Species: Marine. Kai will make sure it is ready for press as her time and energy allow. We do have other intentions moving forward, but we all need some time to grieve and process, especially Kai. So we’ll share more details on other ways we’re going to continue to honor Chad and his work in the New Year.

Thanks to all of you who have prayed, written notes of support, donated funds, and shared your appreciation with the Jensens and with GMT over the past difficult six months. Kai made sure that Chad saw your words and knew of your contributions and shared that he found great joy and encouragement in them. From my heart to yours, thank you sincerely for helping Chad and Kai—two beloved members of the GMT family—endure a time of great trial with courage, joy, and much love.

Let’s all lift a glass to Chad and the many happy memories that he and his creations have provided us. Rest in Peace, my brother.

There were two new additions to the P500 this month and both look really good! All they needed to do was add a land based game to complete my sentence in the title! I am sure those are coming.

We received our copy of Red Storm about 6 weeks ago and have yet to do anything with it other than unbox it and begin taking a look at the rules. The game is a look at the air war over Central Germany during a 1987 World War III scenario between NATO forces and the Warsaw Pact. The game looks really good, although it is not really for the faint of heart as there is some complexity to the rules (a 60 page rule book is never not complex in some form). We love air combat and have enjoyed many titles from the GMT Games Wing Leader Series and this one is simply more goodness in a different time frame. You are dealing with jets rather than propellers so there is speed! And missiles instead of machine guns so there is some pop! From the game page for the expansion, we read the following:

Red Storm: Baltic Approaches is the first expansion for GMT’s Red Storm game of operational level air combat between NATO and the Warsaw Pact. Red Storm: Baltic Approaches adds the air forces of three new countries (Denmark, Sweden, and Poland) along with additional units for nations represented in Red Storm, including US Marine Corps aircraft. The game will also add naval units, anti-ship missiles, maritime weather, and rules covering other facets of air combat in the predominantly maritime domain of the western Baltic.

New scenarios, for both 2-players and solo, are infcluded so you can take this game through its paces in case the 24 scenarios in the base game weren’t enough. Those new countries mean different types of aircraft with differing capabilities. Here is more info on the new hardware:

If you are interested in Red Storm: Baltic Approaches you can pre-order a copy for the special P500 price of $31.00 from the GMT Games website at the following link: https://www.gmtgames.com/p-844-red-storm-baltic-approaches.aspx

I once heard that proper grand strategy in wargames requires the inclusion of naval operations. While this game doesn’t have ground forces it does focus on the naval side of World War II and its many problems including too few ships to cover the whole of the vast Pacific to supply concerns. This game takes a look at the strategic picture of the naval conflict and offers over 1,200 combat ship counters to play around with. From the game page, we read the following:

Seas of Thunder not only allows players to re-create the Atlantic or Pacific theaters of the war but to see how challenging the entire picture was for their leaders. How do you protect a globe from German raiders? How desperate was it for Britain when France fell and they were left to fight Germany and Italy alone on the high seas? What is the right balance for the Soviet fleet split between for distinct fronts (Baltic, Black Sea, Arctic, and Pacific)? If the Mediterranean force weakens for the allies, where to they draw ships. from? Does Japan strike quickly or play for attrition when they arrive on the halfway point? Will America fight in two fronts, three, or four?

In Seas of Thunder, players will experience the tension of too much sea to cover with too few ships, the frustration of being caught unprepared, or the intensity of a vital stand contesting a high-value sea area. Victory is neither sudden nor guaranteed. In each battle, a flight of Catalinas, the lack of ASW, the improper distribution of air power, or even a missing minesweeper could be the difference between success or failure.

The game takes a very interesting look at scoring as the game is an area control game where each side scores differing victory points for control of areas.

At its heart, Seas of Thunder is a large area control game where the Allies score low numbers of points for control and the Axis score higher per area. Controlling 6 Areas for the Allies may not be as valuable as scoring 1 area for the Axis. The Axis player seeks to win key zones, and the Allied player must make them pay dearly for them.

Points are scored each turn for the following:

The game is divided up into 7 smaller scenarios or campaigns that can be played ‘”as-is” or combined to fight a portion of the war all the way up to the entire campaign.

If you are interested in Seas of Thunder you can pre-order a copy for the special P500 price of $45.00 from the GMT Games website at the following link: https://www.gmtgames.com/p-845-seas-of-thunder.aspx

I love this feature of the Monthly Update and have my moments of clarity when I am able to gather all of my intel and make some good guesses. Recently, I have not bee on target with my guesses so I am hoping that I am a bit better this month. Here is the information shared by Gene on upcoming titles:

Here is a brief tease for P500 additions lining up in the coming months. Note that this is not a comprehensive list, so I will switch these up a bit from month to month. My October hint of “Jeff Horger’s latest design – WWII themed” referred to this month’s new Seas of Thunder. And my previous hint of “A new expansion for one of our operational air games” referred to this month’s new Red Storm: Baltic Approaches. Over the coming 1-6 months, I anticipate that we will add:

Those are my best guesses. I feel good about at least a few of them but you just never know what is rolling around in the mind of Gene! How did I do?

Shipping. This Friday, Nov. 22nd, GMT will begin shipping all P500 orders of the following products:

Their next P500 shipment will begin in early December (probably around the 10th, but that will depend on how quickly the 11/22 shipments are completed), and will include the following products:

Charging. Beginning Monday, December 3rd (one item per day), GMT will charge for these the following items:

As I always tend to end these posts, I will post a summary of where my 36 P500 games stand as of November 22nd. I routinely check the status of each of my games and also will show the change in orders as compared to the last time I wrote them down on October 24th.

I also wanted to include at the end of this post our reviews/interviews/unboxings of recent GMT games that we have played and enjoyed:

Unboxing Video for Death Valley: Battles for the Shenandoah

We are really swamped with GMT Games goodness at the moment, and there is much more coming very soon. I bet we will see around 10 more P500 games shipped in the next few months and we will then be completely buried under an avalanche. But I am not complaining!