We have been reaching out to various designers to provide new and interesting content to share in addition to our “bread and butter” designer interviews. One of these new features is associated with Event Card spoilers from various games that rely on cards, such as Card Driven Games. We have asked the designer for People Power: Insurgency in the Philippines, 1983-1986 from GMT Games Kenneth Tee, to provide us with text of some of the proposed Event Cards and also to give a short summary of the historical background as well as their use in the game. We are very grateful for Kenneth and his willingness to do this for us and for our readers. He has been very gracious and shared lots of interesting elements in his design.

In our 6th Event Card Spoiler post regarding People Power, we take a look at #53 Alejo Santos and the Extended 1981 Scenario. Please keep in mind that the artwork and layout of these cards is not yet finalized and is only for playtest purposes at this point. Also, as the game is still in development, card details may still change prior to publication.

Though I originally planned to create a COIN game for the purpose of being an intro to the series, I wanted to give it more “meat” for the experienced COIN gamer to “chew” on. Aside from the Personality Cards, another morsel I wanted to add was an additional scenario that began the game not in the aftermath of the Aquino assassination but during the dawn of the 80’s and for the Philippines, the lifting of Martial Law after 9 years and the events that occurred prior to Senator Aquino’s fateful decision to return to the country of his birth. 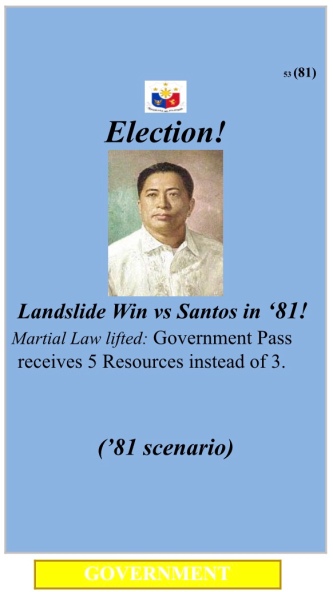 The background of the scenario begins with the date of January 18, 1981. Historically, that was when President Ferdinand Marcos formally lifted martial law (Proclamation No. 1081) which had been in place since it was declared in September of 1972. The reason behind such as act has been reported and rumored due to several reasons. One being that Pope John Paul II was about to embark on an Asian tour with the Philippines being one of his destinations for the beatification ceremony for the first Filipino saint, Lorenzo Ruiz. Another was to increase his political influence with the newly elected President of the United States, Ronald Reagan, an old ally and friend and staunch anti-Communist. Be what it may, Marcos still realistically held on to power despite this and would still be in that position where it not for the EDSA revolution of 1986.

To maintain that facade, he declared national elections to be held at June of the same year in which his own office was at stake. Opposition party candidates who would have ran were either in jail or in exile and also had the frustrating experience of running in absentia during the parliamentary elections of 1978 where the president’s party locked in all the offices and thus decided to boycott. The need to legitimize the election as well as his personal rule – in stepped Alejo Santos, a former general, defense secretary and member of the president’s old and nearly defunct Nacionalista party. A virtual unknown, even to his own former party and especially in the public eye, his defeat was practically a given and there was even a pro-US statehood candidate who garnered about a few hundred thousand votes and came in third.

In the context of the scenario and the game, the landslide victory marks the beginning as the Election! Card “Landslide Win vs. Santos in ’81!” starts located on the Aquino Fate Holding Box on the map board. This gives the Government player a Government Momentum card to start. That allows a Government Pass option 5 Resources instead of the usual 3, an additional 2 Resources as an extra incentive for the Government to use. Besides the Election! Card, the scenario adds 6 more Event Cards (Sparrow Units, Pata Island, Public Speeches, UNIDO Boycott, Pope John Paul II Visit and VP Bush Toast) and 3 more Personality Cards (Santos, Jovito Salonga and Rodolfo Salas – 1 Government, Reformers and Insurgent each) to add to the game.

The other change to the game is that instead of the game being interrupted by an Election! Cycle, it follows a significant change in procedure to reflect the reality of Aquino being assassinated a year before the parliamentary elections of 1984 (the first Election! Card in both the Standard and Extended Scenarios), the Aquino Dead card is shuffled into the last two cards of the deck before it is placed on top of the deck containing the 1984 Parliamentary Election! Card and also follows a shortened procedure of the Election! Cycle. This involves the skipping of some Election! Cycle steps (such as Resources, Support, etc.) straight into Redeploy and Reset but the retention of the Victory? step as either Faction has the capability to win and there are the Personality Cards (or Newmakers) that might help!

Finally, just as I included an Extended scenario to People Power, I have chosen to add an Alternate 1981 scenario as well. The only difference is that instead of placing the Aquino Dead card, an Aquino RANDOM Fate card is placed instead. This card’s mechanism adds the Aquino Imprisoned (a possibility if the assassination had not occurred) and the Aquino in Exile (another possibility if he had not chosen to return) to the mix for those who want to explore alternate possibilities. Simply put, instead of a Reformer Momentum card in place for that Faction to use, either a Government or Insurgent Momentum card may be in play so that the replayability of the game increases two-fold. Currently, the simple method of execution is a simple card draw but I am also toying with a dice modifier mechanic that entails the victory condition point spread and other cards played. I can only hope that I hit that target.

After the Election! The Fate of Alejo Santos

Losing the election to the incumbent Marcos, Mr. Santos faded into obscurity and died in February of 1984, three years after his defeat. His remains now reside in a cemetery reserved for Philippine military heroes and a national police camp has been named in his honor. 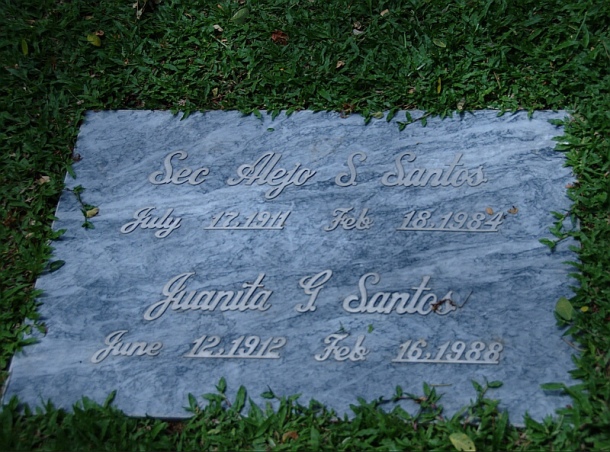 There are many more of these Event Card spoiler posts to come as Kenneth has laid out a plan to share lots more information about this game with us.

In case you have missed the first few spoilers in this series, you can catch up by reading from here:

If you are interested in People Power: Insurgency in the Philippines, 1983-1986, you can pre-order a copy from the GMT Games website at the following link: https://www.gmtgames.com/p-689-people-power-insurgency-in-the-philippines-1983-1986.aspx

Also, check out our interview with the designer Kenneth Tee to get better insight into the game and its design.