We have agreed to host a series of posts written by David Thompson on the blog about his upcoming design Europe Divided published by PHALANX and now on Kickstarter as of June 10th. As you know, we have hosted a few different series of Event Card spoilers over the past year or so with All Bridges Burning and People Power both from GMT Games as well as a recent CDG focused on the Barbary Coast War in The Shores of Tripoli from Fort Circle Games. I really love the Card Driven Game mechanic and frankly any game that uses cards as a primary engine. All good things must come to an end though and this series will end with this final post. The Kickstarter is funded and still has 6 days remaining so congratulations to David and Chris on their game coming to life.

The Future is Yet to Come

In the final part of the series, we expand from taking a look at just one card, to taking a look at a group of cards. Specifically, we’re looking at an expansion set of twelve
“future headline” cards.

Of all the things we talked about during the development of the game, this addition is the one I am the most excited about. It was relatively late in the design when Jaro — the lead developer — challenged me with an idea: what if we added future events to the game? I loved the concept. I remember back fondly to our frantic early morning messaging chats, where we sent each other headlines from all over Europe. Potential issues facing Eastern and Central Europe, as well as the Caucasus. We argued over a few (all good natured of course!), but in the end, I think that this expansion of the game is really going to be an exciting addition.

The expansion adds twelve new Headline Cards — six for each player, of course — that allows you to extend the game into the hypothetical future. Instead of adding a third period, it simply expands the second period for a handful more turns. This has the advantage of seamlessly integrating the new headlines, without changing the core structure of the game.

In my opinion, it also showcases the potential of the core system moving forward. There are so many possibilities. Do Georgia and Ukraine join NATO, or maybe there’s a renewal of the Nagorno-Karabakh conflict? Is it possible Russia will make a military play for the Baltics? This expansion gives you the chance to answer those questions. 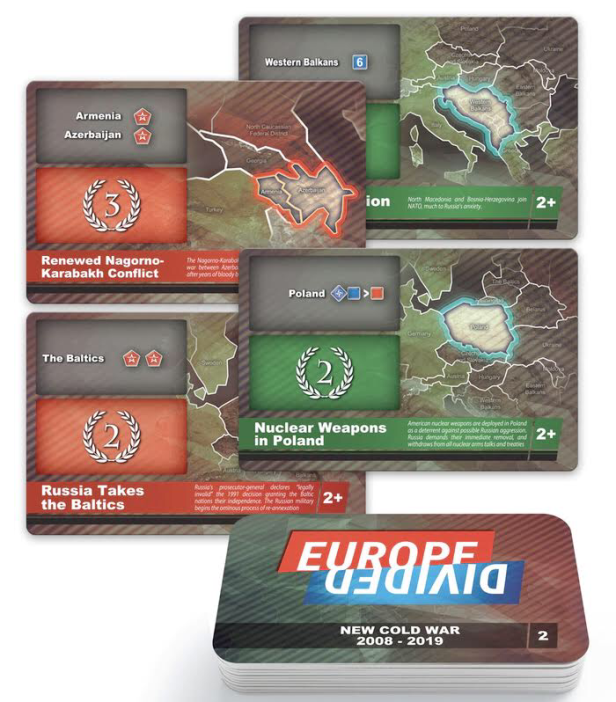 Thank you for your time in writing these posts for our readers over the past month David. The game looks very interesting and is sure to be a winner with its focus on the new Cold War and the use of these fantastic Headline Cards grounded in the history of the past 30 years. If you want to find out more about the game and how it works, check out our interview with codesigner David Thompson.

If you missed the other posts in the series, here are links for your convenience:

As I mentioned this post will bring the series to a close. But, if you are interested in the game, there is time left on the Kickstarter campaign so check it out. Here is a link to the page: https://www.kickstarter.com/projects/phalanxgames/1326338383?ref=bggforums&token=d1da70d8