History Behind the Cards #2: 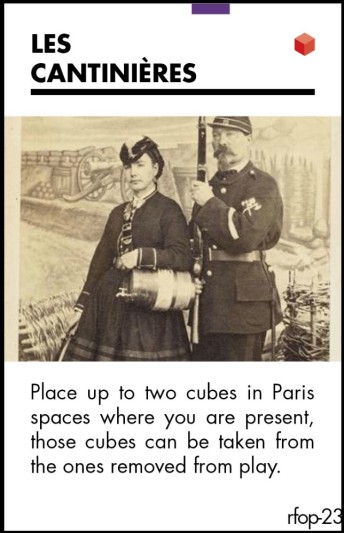 “It is painful to say: in today’s civilization, there is a slave. The law has euphemisms: what I call a slave, she calls a minor; this minor according to the law, this slave according to reality, it is the woman.” – Victor Hugo

One of the crucial political aspects of the Paris Commune was the considerable support it had from women. Indeed, in 1871 France, there was not much to be conservative about when you were a woman, and everything was still to be obtained. Their role in the insurrection was pivotal, both in the political and military sphere. Les cantinières are a perfect example of women’s involvement in every aspect of the Commune. They served in the Fédérés troops, each battalion containing four cantinières. Their primary role was food supply and nursing, often providing medical care by risking their own life. But it was also a way for some women to get into the army and take part in the fighting. It is hard to quantify how many women enrolled and took part in combat; what we know is that women’s names were often present in the list of soldiers killed in action.

Therefore, it made sense to have event cards that showed women’s involvement in the military. Les cantinières are a powerful card, not for the cubes it provides, but because you don’t have to take them from your available cube pool but from the cubes that were removed from play. In Red Flag Over Paris, the Commune player has a hard time keeping enough influence cubes in play to revolve his final crisis hand; this event helps him do so by abstracting the decisive role of the cantinières on the battlefield.

The next card in the series will be #3 Les Amis de l’Ordre.

In case you have missed the recent posts in the series, you can catch up here by visiting the links below: