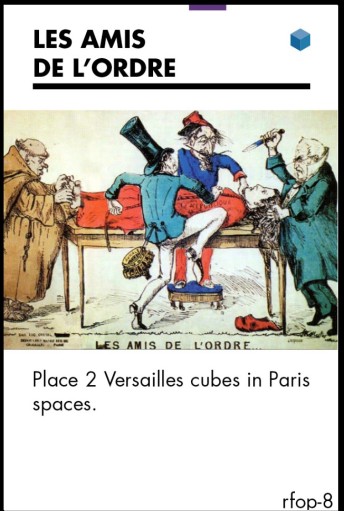 On March the 21st 1871, twenty-eight conservative newspapers published a manifest denying the Central Committee’s authority and asking for a boycott of the upcoming Parisian Elections to form the Paris Commune government. This manifest and its consequences were the first direct political attack against the Paris Insurrection.

But this wasn’t only propaganda; the Versailles government also organized counter-revolutionary groups in Paris to prevent the elections from happening. As for any city, Paris has a social division that you see in its geography. The neighborhoods on the west have always been more prosperous and more conservative. In contrast, the population in the east is mostly middle class and working class, more prone to rebellion, and asking for social reforms. The day the manifest was published, in the wealthy areas of Paris, hundreds of righteous people of the Parisian bourgeoisie took to the street to protest against the election, asking for “Law and Order”. A blue ribbon symbolizes this movement, worn by the protesters, as they parade on rue Vivienne, next to the Paris Stock Exchange. After this first day of protest, the Central Committee decided to delay the election, Les Amis de l’Ordre felt like they had momentum. So, on the following day, around a thousand protesters marched from l’Opéra Garnier to Place Vendôme, where the HQ of the National Guard is located. Tension escalated quickly as soldiers tried to prevent the protesters from entering Place Vendôme. Two soldiers fell dead, and seven were injured after some demonstrators started firing. After multiple summations, Jules Bergeret decided to give the order to fire on the protesters. Fifteen protesters died on the 22nd, and it is the first time that civilians were killed as a consequence of the rivalry between Paris and Versailles. During the war council after the fall of the Commune, the events of the Place Vendôme were not kept as charges, potentially showing that the Versailles government knew it was hard to label the movement as spontaneous.

Les Amis de l’Ordre are a vivid example of the existing tension within Paris. It is also an event that embodied the fact that the opposition between citizens in favor of the Commune and the ones in favor of Versailles was not only ideological anymore, but started to become violent. In Red Flag Over Paris, you are only allowed to place influence in a military space (Paris and the surrounding forts) if you already are present in that space or if you dominate an adjacent space. This event enables you, as it was the case historically, to attempt to take a foothold in the city, behind enemy lines. Those groups will be isolated, but if you coordinate with troops outside of Paris, it could be a significant blow to the Commune’s authority in Paris.

The next card in the series will be #4 Louise Michel.

In case you have missed the recent posts in the series, you can catch up here by visiting the links below: