We have asked the designer of Labyrinth: The Forever War, 2015-? from GMT Games Trevor Bender to provide us with text of some of the proposed Event Cards in the expansion and also to give a short summary of the card’s historical background as well as their use in the game. This is the fifth of six Event Card Spoilers from the second expansion to Labyrinth: The War on Terror, 2001-?. He will preview 2 cards each from the US, Jihadist and Unaligned portions of the deck over coming weeks. These cards have not been previewed elsewhere. We are very grateful for Trevor and his willingness to do this for us and for our readers. Thank you for your hard work Trevor on this great expansion!

In our 5th Event Card Spoiler post regarding Labyrinth: The Forever War, 2015-?, we take a look at card #319 Tehran-Beirut Land Corridor. Please keep in mind that the artwork and layout of these cards is not yet finalized and is only for playtest purposes at this point. Also, as this political military simulation game is still in development, card details may still change prior to publication.

Note that the base game of Labyrinth has 120 cards in it, as do both The Awakening and The Forever War expansions, and that each card is individually numbered so they could be called out specifically from the now 360 card deck to form a variety of scenarios, as was done in the Labyrinth: Surge – The Way Forward [2007 Scenario] as published in C3i Magazine Nr31.

This featured card represents the political (or military) achievement of an economic goal by Iran, that of creating a land corridor from the Persian Gulf to the Mediterranean Sea, entirely controlled by them. In the 2017 scenario, Iran represents the principal Jihadist adversary of the US player.

A recent objective of Iran is to establish a secure connection that would allow highway access for goods and military vehicles across the fertile crescent from Tehran to the Mediterranean Sea. The secure shipment of oil and other trade goods across this route would further establish Iran as a regional power, and one that would be less vulnerable to the closure or adversarial control of the Strait of Hormuz, and in a symbolic way would represent the reestablishment of the western portion of the old Silk Road land route.

The game effect is to increase Iran from a 2 Resource country to a 3 Resource country; other events could affect the Resource value of Iran as well, such as Oil Price Spike (+1), OPEC Production Cut (-1) and Strait of Hormuz (-1). The prerequisites for this event require that the Jihadist player have some semblance of control/influence of three of four specified countries between Iran and Lebanon in order to obtain this benefit, and they lose it if any of those three countries lose that status. The art work on the card depicts a convoy of trucks sporting Iranian flags as they hypothetically make the trip to the Mediterranean Sea and back.

Similar to Qatari Crisis, this card makes a minor modification of the map by changing the resource value of Iran, which is represented by a marker on the physical map. In the future Playdek electronic version of the game expansion, these dynamic map changes will be handled seamlessly as the map reelects the latest Resource value for each country and other variable information.

During the last card preview, The Players’ Aid was also the first to present the cover art work for The Forever War expansion prepared by Rodger MacGowan as shown below. 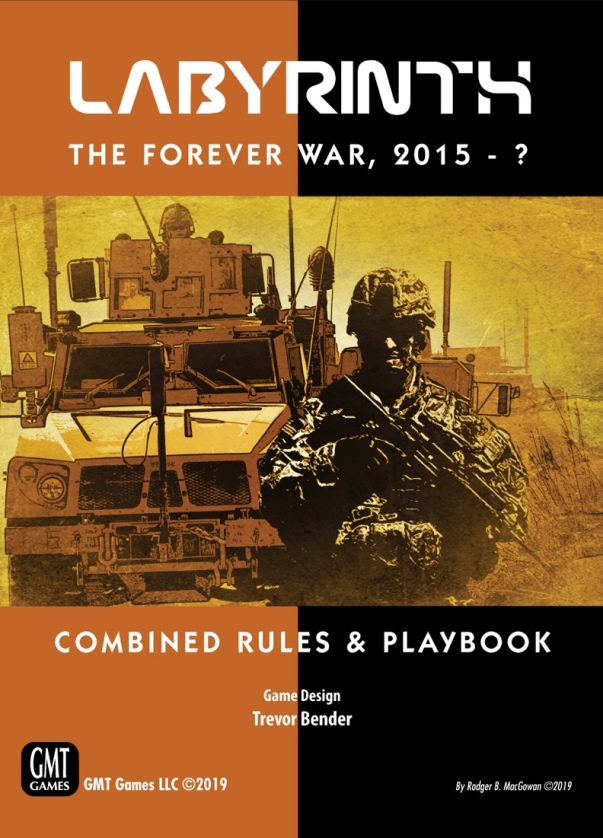 Rodger brought back the front and center soldier from the original Labyrinth box to show that he is still bearing the burden of the 18 year military commitment to the Global War on Terror (GWOT), and then decorated the background with some of the more modern vehicles used in Syria and Iraq (MRAP M-ATV), but left it to the viewer’s interpretation if this convoy is advancing or withdrawing.

As a result of this first showing on the Internet, the cover art became a top image on Board Game Geek (BGG) that week…thank you!

The next and final card in the series will be #351 Advanced Persistent Threat (APT).

In case you missed the previous installments in the series you can catch up on them below:

If you are interested in Labyrinth: The Forever War, 2015-? you can learn more on the game page on the GMT Games website at the following link: https://www.gmtgames.com/p-769-labyrinth-the-forever-war-2015.aspx

We also published an interview with the designer on our blog a few months ago that will give you greater insight into the design: https://theplayersaid.com/2019/09/03/interview-with-trevor-bender-designer-of-labyrinth-the-forever-war-2015-from-gmt-games/