Do you like a little bit of chaos and unpredictability in your game play? Or do you prefer a game with scheming, subtlety and a little bit of turnabout? I may have a game that has a bit of both in it. Ancient Civilizations of the Inner Sea is a lite civilization building game that sees 1-6 players take on the role of an ancient power to see if they can build up their civilization and conquer the opposing great civilizations of the ancient Mediterranean. The game covers four Epochs starting with The Bronze Age (3,000-1,200 BC), The Iron Age (1,200-750 BC), The Rise of Empires (750-100 BC) and The Fall of Empires (100 BC-500 AD). This competition comes in the form of gaining Victory Points through building cities and the Great Wonders, sacking and looting cities through war and domination of the sea.

In this series of Action Points we will take a look at the Growth Phase, including how you acquire disks, deploy disks and the purpose of spreading your culture, the Card Phase and the different types of cards that appear in the deck, the Wonders, how you build them and their special abilities, and the Competition Phase including Contested Areas and how to resolve them, how allies affect this outcome and the looting of vanquished cities.

One of the most important aspects of the game is the proper management and use of your limited supply of 48 disks that represent settlements, cities, soldiers and ships, including trade ships and vessels of war. Each turn players will gain a number of disks to place out and expand their influence in the Ancient World. It also will be able to reclaim or retire disks that are no longer needed to then bolster their limited disks to spread influence in a different way. Let’s take a quick look at each of these steps.

During the Retirement Step players are allowed to remove from the board any number of non-City disks back to the player’s supply. A City is defined as any stack of three disks. This tactic is unlikely to be used early in the game as players will be trying as hard as they can to get their disks onto the board in order to generate more disks during the Acquisition Step or to score Victory Points in the Reckoning Phase.

This step is really provided to allow players to reclaim disks that were not ideally placed or for which conditions have changed. This can also be very useful in collecting disks to fend off a massive Barbarian invasion in your capital or that is in your way of expansion.

Let’s take a look at a quick example of what I’m trying to convey. In the picture above, the Carthaginian player (Green) has placed several disks in seas spaces from Sardinia to Tarraco as they wish to establish a presence in Gaul. They have to place in these sea spaces to establish a chain to the land. They then place four disks creating two Settlements on the land, 2 disks in Tarraco and 2 disks in Aquitania. After placing these disks they realize that they are nearing their limit of disks and will not be able to develop their Settlements on future turns into Cities. During the next Growth Phase during the Retirement Step they decide to take back the disks placed in the sea spaces to be able to place them in other spaces in futures turns. They remove the two disks and place them back in their supply for later use.

During the Acquisition Step, players will collect disks they are entitled to from their Supply and place them in the Ready Box to place on the board during the Deployment Step.

Disks will be earned as follows:

Settlements – 1 disk for each Settlement on the board. Remember that a Settlement is any two disks stacked together on the same land space. Settlements are your main economic centers and create disks due to population growth that is abstracted in this way.

Sea Presence – 1 disk for every 2 shallow sea spaces that they occupy with disks. Players do not count deep sea spaces. This element represents commerce from shipping.

Commerce – 1 disk for each opposing civilization that has a disk in or adjacent to a land or shallow sea space that toot civilization occupies with a disk. This represents interaction between civilizations in trade.

Special Abilities – transfer disks from the abilities of your civilization shown on your Civilization Display.

In the picture above, the Romans will receive 7 disks during the Acquisition Step. Can you see why? They have 5 Settlements which will create 5 disks, 3 total sea spaces which will create only 1 disk (1 for every 2 sea spaces) and are adjacent to one opposing civilization which will garner 1 disk. 5 + 1 + 1 = 7 disks.

During the Resettlement Step you are allowed to transfer 1 disk from any number of Cities on the map to your Ready Box. Why would you ever do this as this means you will lose Victory Points later in the round as you will now not have those Cities? Well, this is a very strategic move as you may have an opponent who is threatening several of your Cities and you don’t want them to gain Victory Points and Talents from defeating you in a Competition. You might just need to regroup and ready your forces to put up a fight later as you deploy your disks to the board during the Deployment Step.

Finally, we get to deploy our disks to the map during the Deployment Step. During this step you will simply place disks in your Ready Box onto the map. Not all of your available disks need to be placed but any that remain in the Ready Box at the end of the Deployment Step will be returned to your Supply.

Let’s take a look at the Carthaginians (Green) as they deploy their disks. 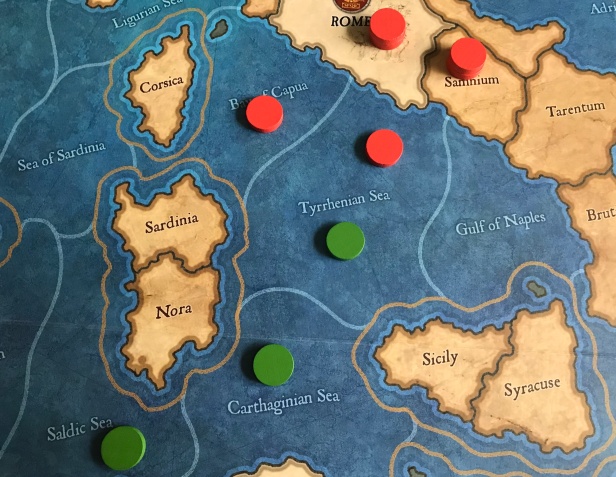 The Carthaginians collect 7 disks during this Acquisition Step and want to get near to their opponent the Romans and get a foothold on the Italian Peninsula. To this end they place a single disk into the Tyrrhenian Sea and match the disks from their opponent. If the Romans had two disks here they would have to place two to use it to chain to the adjacent sea space.

They then place a single disk in the Gulf of Naples and are now adjacent to a vacant land space on the Italian Peninsula and still have 5 disks remaining in their Ready Box. 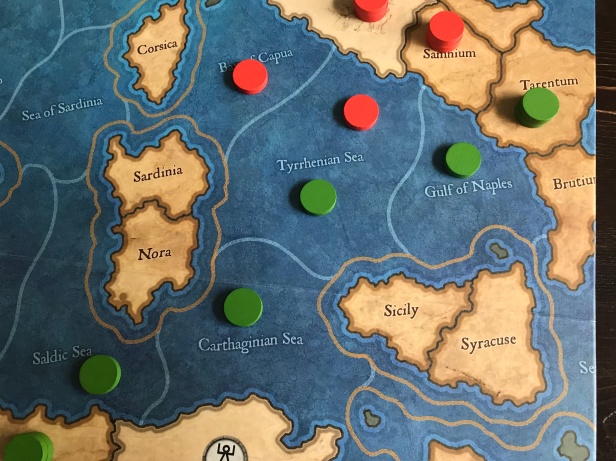 They place one disk into the land space Tarentum followed by a second disk to form a Settlement. This will offer them an additional disk during the next Acquisition Step and also will create a more formidable defense to future Roman growth and expansion from the west. 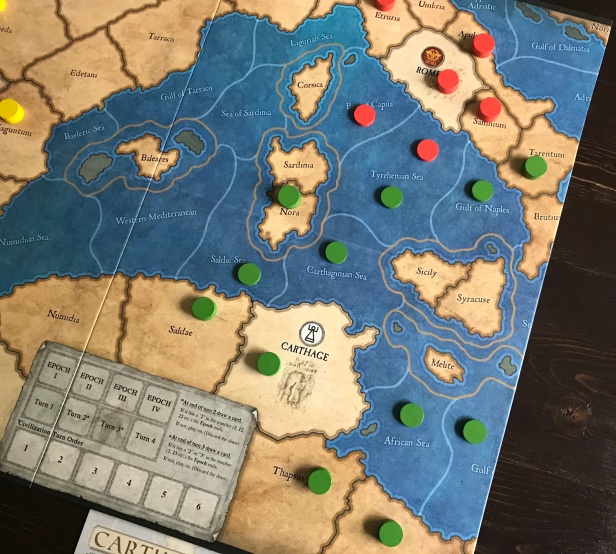 The Carthaginians use their final two disks to build a settlement on Nora. Once again they are concerned about increasing their economy to gain more disks in the future.

In looking at their situation if it ended now and was at the Acquisition Step, they would gain a total of 10 disks. A pretty good start for Carthage! The Romans will surely contest the Settlement in Tarentum and probably will challenge the navies in the Tyrrhenian Sea.

I hope you got a good feel for the Growth Phase and how it works. The game is very simple and the rules take only a few minutes to learn and a round or two to see how they should be done.

In Action Point 2, we will dive into the Card Phase and take a look at the different types of cards that appear in the deck. Oh get ready for the pain!