Unconditional Surrender is an operational level look at the European Theater of WWII, designed by Salvatore Vasta and published by GMT Games. The scope of the full game is breathtaking, not just geoprahically but also geo-politically as well. There’s so many what-ifs you can play around with and that’s something I really love. The second printing is currently available on P500 along with a set of mounted map boards too, which are always a welcome upgrade. But, if you’re not sold you can always pick up a copy of ‘Case Blue’, a small scenario and snippet of the main game that comes in C3i Magazine issue #28.

Case Blue is played on a small letter size map card that depicts the parts of Russia north of the Black Sea. You’ll play as either the Germans trying to sweep east and capture important strategic resources during Operation Barbarossa or as the USSR trying to defend the Motherland from the blitzkrieg. The Unconditional Surrender system is very free flowing and as one unit finishes all of it’s movements and combats the board can look vastly different from when even that unit started it’s activation. This is something about the system that I really love. Whilst any war game rewards critical thinking and strategic employment of resources, I feel like the US! system rewards players who also play with their gut instincts as well, which could help newer players take on a much larger scale game like US! All of this is on display to a smaller degree in Case Blue, but it gives you the capacity to see almost all of the core mechanics and what game flow looks like on the board.

Case Blue doesn’t come with all of these pieces, I just incorporated them all into the main game, but the counters, whilst of the smaller variety, are still very clean and clear. This is because they don’t actually have any combat values or movement values on them. The counters show faction, unit type and designation. All combat values are compiled into the truly genius DRMs for the CRT, which is the highlight of the game. Case Blue showcases how easy the combat is, which is unbelievably refreshing. You won’t be sat calculating and re-calculating a billion combat factors from a huge stack and trying to remember each and every bonus/negative. With pretty much no stacking allowed, you just run down a list of really simple modifiers and then roll. BAM! Done. This really speeds up play, which is an achievement for a game that is designed to model such a large and sweeping scale. 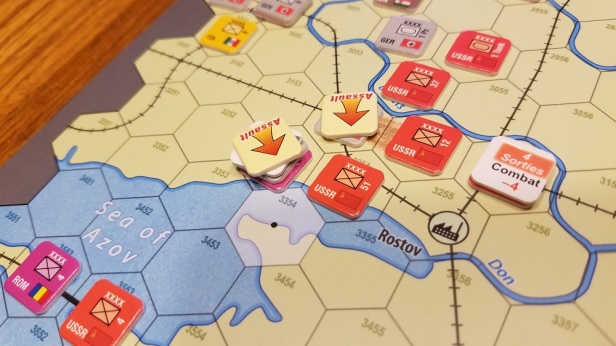 The movement allowance system is also very simple, foot units have 8 MPs and Mechanized units have 10. You spend them to move and attack. 1 unit spends all of their MPs before moving on, so you can have your foot armies break the enemy lines and then spend 10MPs to simulate the blitzkrieg and race your Panzer units half way across the board through the opened up lines. The way the system works opens up game play and rewards not just number crunching but guts. In more crunchy games, I’m much less willing to gamble, but in Case Blue I found myself ‘going’ for things that I would normally have shunned as too reckless. 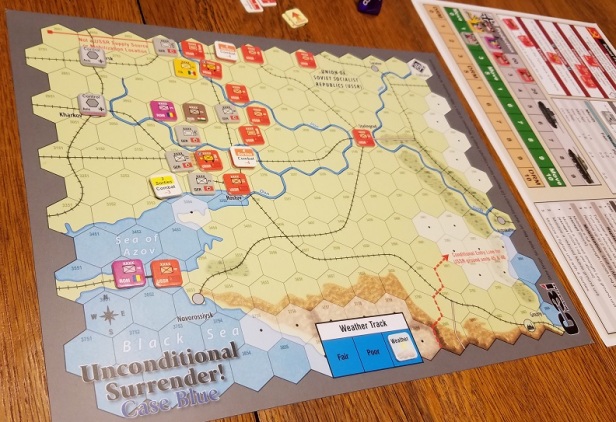 I had a good time playing Case Blue, and I would recommend it as a taster for Unconditional Surrender! and as an introduction to the system (which you will love). However, you’ll quickly out play this game after a couple of tries. It’s a simulation of only a small part of the war, it’s not going to provide you with 100s of plays, naturally. Normally that’s not a great thing, but the next step is to just dive right in and get Unconditional Surrender! and I promise you it’s totally worth it. Taking Case Blue to the next [and it’s proper] level is so rewarding. Again, if you’re on the fence, get C3i #28 and try it out, it’s a fantastic system and you’ll figure that out for yourself one way or the other really quickly. Also it’s C3i! So even if you don’t end up loving Case Blue, there’s so much other great stuff in the issue you won’t have wasted any hard earned cash.