We have asked the designer of Labyrinth: The Forever War, 2015-? from GMT Games Trevor Bender to provide us with text of some of the proposed Event Cards in the expansion and also to give a short summary of the card’s historical background as well as their use in the game. This is the second of six Event Card Spoilers from the second expansion to Labyrinth: The War on Terror, 2001-?. He will preview 2 cards each from the US, Jihadist and Unaligned portions of the deck over coming weeks. These cards have not been previewed elsewhere. We are very grateful for Trevor and his willingness to do this for us and for our readers. Thank you for your hard work Trevor on this great expansion!

In our 2nd Event Card Spoiler post regarding Labyrinth: The Forever War, 2015-?, we take a look at card #315 Khashoggi Crisis. Please keep in mind that the artwork and layout of these cards is not yet finalized and is only for playtest purposes at this point. Also, as this political military simulation game is still in development, card details may still change prior to publication.

Note that the base game of Labyrinth has 120 cards in it, as do both The Awakening and The Forever War expansions, and that each card is individually numbered so they could be called out specifically from the now 360 card deck to form a variety of scenarios, as was done in the Labyrinth: Surge – The Way Forward [2007 Scenario] as published in C3i Magazine Nr31.

Our second card to be previewed is #315 Khashoggi Crisis, shown below. Note the Labyrinth system is a game based on current events that are political and military in nature, and as such frequently covers topics that are sometimes controversial and/or ongoing and unresolved. This featured card fits this description and is designed to get us to think in a different way about the risks that journalists take while pursuing their craft. Jamal Khashoggi was killed 1 year ago today on 2 October 2018. 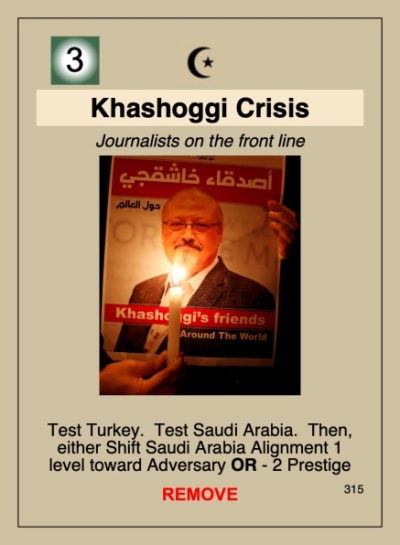 Some have suggested that the disappearance of US resident and dissident Journalist Jamal Khashoggi was the toughest foreign policy crisis of the first two years of the Trump Administration. Khashoggi entered the Saudi Consulate in Istanbul to finalize divorce papers on 2 October 2018, but instead was the subject of an extrajudicial execution, while his fiancée waited for him outside in the car. Turkish authorities claimed both audio and video evidence of a brutal killing, but took a long time in bringing specifics to light, apparently to give the Saudi’s and the US time to figure out how to resolve their differences without threatening the long-term alliance.

Ultimately the Saudis acknowledged that Khashoggi was dead. Initially they said it was from a fist fight that occurred shortly after he entered the consulate, then later from a drugged kidnapping that had gone wrong and finally from strangulation. 18 Saudis were arrested in the aftermath, and five more government officials were dismissed from their post. The Turkish government revealed they had hacked the phones of the assassins and recorded the conversation, including a call to “tell the Boss” that the deed was done.

The US Treasury Department designated 17 Saudi Arabians for involvement in the killing, and imposed sanctions that froze U.S. assets and prohibited Americans from dealing with them. A couple days later the Saudis sentenced five of the executioners to death, followed by an American CIA report declaring they had evidence that the Crown Prince Mohammad bin Salman had given direct orders for the operation to be carried out, setting the stage for a potential succession crisis in the Kingdom that never came.

The event card effects portray the dilemma the US was in as the crisis broke, as distancing themselves from a key ally would impact efforts in the GWOT, while support for the Crown Prince would be unpopular in the Middle East.

On 11 December 2018, Jamal Khashoggi was named Time magazine’s person of the year for his work in journalism along with other journalists who faced political persecution for their work.

In September 2019, Saudi Crown Prince Mohammed bin Salman (Event Card #333 MbS) stated that he bears the responsibility for Khashoggi’s assassination by Saudi operatives “because it happened under my watch”, according to a preview of a PBS documentary. However, he denied having any prior knowledge of the plot.

According to Reporters Without Borders’ annual report, the year 2018 was the worst year on record for deadly violence and abuse toward journalists; there was a 15% increase in such killings since 2017. Ruben Pat was gunned down outside a Mexican beach bar. Yaser Murtaja was shot by an Israeli army sniper. Bulgarian Viktoria Marinova was beaten, raped and strangled. A car bomb killed Malta’s Daphne Caruana Galizia. Jamal Khashoggi was killed inside Saudi Arabia’s consulate in Istanbul on Oct 2nd. A known total of 84 news media or citizen reporters were killed in 2018, showing the dangers involved in searching out the truth in support of the rule of law.

The next card in the series will be #275 Operation Inherent Resolve.

In case you missed the previous installments in the series you can catch up on them below:

If you are interested in Labyrinth: The Forever War, 2015-? you can learn more on the game page on the GMT Games website at the following link: https://www.gmtgames.com/p-769-labyrinth-the-forever-war-2015.aspx

We also published an interview with the designer on our blog a few weeks ago that will give you greater insight into the design: https://theplayersaid.com/2019/09/03/interview-with-trevor-bender-designer-of-labyrinth-the-forever-war-2015-from-gmt-games/