In this series of Action Points we are taking a look inside the solitaire only game The Wars of Marcus Aurelius: Rome 170-180CE from Hollandspiele. The game simulates the strategic level struggle of the Romans led by Marcus Aurelius to stave off the invasions of Germanic tribes and Sarmatian raiders as they encroach on Roman territory across the Danube River. The game uses cards in a pseudo CDG format to move the game along and is very well done.

What is a Pseudo CDG Format?

I have described the way this game uses its cards as a pseudo CDG format. Why do I use those words to describe this game? Well, it is simply that the designer used one typical element of the CDG in this game, namely that of including events printed on the cards, and omitted the other. The omitted part is the Ops Points that are so typical of the genre. The Ops Points are typically a printed value that appears on the card that denotes that the card can be used to take that many points worth of actions. In The Wars of Marcus Aurelius these points are simply replaced by the formula “discard a card to take one of the following actions”, which I think works really well in this game.

The game allows the player to do one of two things with their cards from The Roman Deck. Players can follow the instructions printed on the card in the form of an event. Otherwise, they can discard a card from their hand to perform one of the following actions:

Advance the marker on the Imperium Track one space;

Flip one Level 1 Fort to a Level 2 Fort;

Transfer a Leader between armies;

Add the Upper or Lower Danube Fleet marker to the board which allows for movement of armies between boxes;

Transfer up to 6 Legions and a Leader to an Off-Map Conflict space (this action actually costs two cards and I frankly hate having to do it); and

The player can also choose to play no cards on their turn but you must remember that you can never end a round with more than five cards in your hand. With that in mind, let’s take a look at a few cards and their printed events.

As I mentioned, each card in The Roman Deck has a printed event on the card that can be taken by the player in lieu of discarding that card to take one of the 9 actions described above. Some events require you to place the card in the History pile instead of the discard pile after use. This History pile factors into the final scoring at the end of the game. Let’s take a look at a few of the cards to give you a feeling for what I am talking about.

I love this card! Especially when you are shorthanded or your leader is demoralized (as shown in the picture below as Marcus Aurelius is mourning the death of one of him family members). This card is the great equalizer and can be played to even the odds in a fight. First, you must discard another card in your hand to initiate a battle. As you can see, the card says “resolve this battle” and denotes that you must actually be participating in a battle which requires the discard. After you have discarded your card to initiate the battle you play this card and the normal rules for a battle are thrown out the window. This card is very powerful in the instance where you are simply outgunned. For example in the picture below, the Roman player has several things going against them. One, Marcus Aurelius is demoralized and will only contribute +1 to the battle whereas normally he contributes a total of +3. You will also notice that he only has 4 Legions in his army out of the maximum of 6. This means that he will only add +4 to the roll rather than the total possible of 6 as he had lost a few battles prior to this combat and some of his Legions were removed. His enemy the Marcomanni are also being led by a fully bold leader and there are receiving a huge +8 modifier from the terrain in the home space. The chances of the Roman winning this battle following the conventional battle rules are pretty slim. Playing the event Single Combat takes all of those modifiers away and simply forces the battle to be determined by an even roll off of a d6. (We will cover battle rules in Action Point 4 so be patient!)

While this card has a great ability that will make a difficult battle winnable by the Romans, there is a catch. If the battle is lost the Roman player will lose 2 IP (Imperium Points) and will get closer to an automatic loss by being usurped. You must tread lightly with this event and remember that fortune favors the bold.

Historical note: Marcus Valerius Maximianus knocked the Naristae tribe out of the war after he defeated their chief in single combat in 171CE.

I love this event as it makes the game very cinematic as we have all most likely seen the movie Gladiator starring Russell Crowe. This card has a very interesting ability in that the event actually acts as the required discard to initiate a battle and provides an additional benefit. You will use this card to attack a Barbarian tribe with an army that is being headed by Marcus Aurelius but instead of using Marcus’s Combat Value, which is either a +1 (if he is demoralized or +3 at full strength) you will use Maximums Decimus Meridius’s combat value of +4 instead. Another great combat oriented event that can turn your fortunes and give you ability to win a battle that you might not have had any business fighting in the first place. 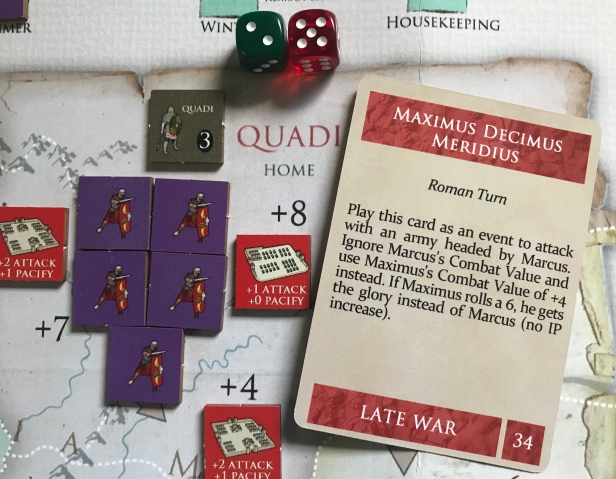 Historical note: Marcus feared Commodus was unsuited to rule and so offered the purple to Maximus. Commodus killed his father and sentenced his rival to death. Escaping only to be captured by slavers, Maximus reluctantly won glory as a gladiator. The historian Ridlius Scottus details how he made his way to the coliseum in Rome, where he fought and killed Commodus, restoring the Republic and heralding the start of a glorious third century for the empire.

Adding Legions to your forces can be rather difficult as there are limited units available. So when an event like Legio XXII Primigenia becomes available it is wise to take it. The main need for additional forces comes once you have defeated one of the Barbarian tribes and they are out of the fight. In order to keep them out of the fight you have to be able to spread your forces out to guard them and one more unit can Aid in this endeavor. If you remember when a card comes up from The Barbarian Deck that calls for an Oath Breaker Check to be made on a surrendered Tribe the Check can be stopped if you have a sum of more Legions in the army box of that Barbarian Track plus the number of Level 2 Forts on that Track, as they add a +1 Pacification bonus, than 6 as the Check uses a 6-sided die and the highest result possible is a 6 (there are no modifiers to this roll.) But you need more Legions to be able to leave some behind on the Track and still be able to mount a reasonable offensive value on the remaining Tribes. A very important event that isn’t real exciting but can make a difference between winning and losing the game.

Historical note: Marcus may have transferred this legion from the upper Rhine to the Danube to help solve the manpower shortage caused by war and plague.

As I discussed at the beginning of this post, the Roman player can discard a card to place two Level 1 Forts on the board. What happens when an event lets you do better than that with the same price of using a card? I would think you would take it. The Sarmatia event gives you not two Level 1 Forts but two Level 2 Forts. The only difference is that the Forts must be placed on the Iazyges Track.

I hope you got a good feel for The Roman Deck and how those cards are used either for the printed event or to discard to take an action. In Action Point 4, we will take a quick look at the mechanics of how combat works.

8 thoughts on “The Wars of Marcus Aurelius: Rome 170-180CE from Hollandspiele – Action Point 3”