My favorite COIN experience is Fire in Lake: Insurgency in Vietnam from GTM Games designed by Mark Herman and Volko Ruhnke. The Vietnam experience is thick in this one and the interplay among the factions is just glorious. We have played the game well over a dozen times and still enjoy every minute of it. In August 2019, GMT announced an expansion to the game in Fall of Saigon which focuses on the end of the war from 1973-1975. Three Fall of Saigon scenarios enable 1-4 players to extend play beyond Paris, beginning before 1968’s Tet, on the eve of the 1972 Easter Offensive, or from 1964 all the way to the end of the war. A standalone 2‑player Black April scenario focuses tightly on the post-Paris sparring between the NVA and ARVN, including the final massive battles, advances, and retreats.

Once the game was announced we reached out to the design and development team to see if we could do a series of Event Card Spoilers and Jason Carr agreed to provide those. We will be hosting 12 of these Event Card Spoiler posts over the next several months and appreciate the effort that both Jason Carr and Stephen Rangazas will be putting into these short write ups intended to share the history of the card as well as their play effects.

*Please keep in mind that the artwork and layout of these cards is not yet finalized (although they are getting close) and is only for playtest purposes at this point. Also, as this game is still in development, card details may still change prior to publication.

Congress usually had deferred to the executive branch on foreign affairs, but the final years of the Vietnam War witnessed one of the most active periods of congressional restraints on the President’s ability to shape foreign policy. Regretting the wide powers given to the Johnson Administration in 1964 with the Tonkin Gulf Resolution and the Nixon Administration’s widening of the war to Laos and Cambodia, Congress placed a series of constraints on the use of force in Southeast Asia. In July 1973, Congress prohibited further US combat activities in Indochina with the Cooper-Church Amendment. That amendment was followed by a more general constraint in November: the War Powers Act was designed to limit a president’s ability to deploy US forces abroad without notifying Congress.

These restrictions were carefully watched in both Hanoi and Saigon. They reassured Hanoi that the United States would not intervene if the NVA launched another general offensive. In Saigon, these restrictions undermined Thieu’s confidence in President Nixon’s promise that the United States would “take swift and severe retaliatory action” against the North if they violated the agreement.

Congress would place further restrictions on the amount of aid provided to South Vietnam in 1974 and 1975. Debates over the War Powers Act and the limits of the power of the presidency have continued into the present, particularly with the US air campaign over Libya and the use of drones as part of the War on Terror.

In Fall of Saigon, the War Powers Act represents an existential threat to the South Vietnamese government, and a direct drop in US Victory (via US Pieces Out of Play) if the US is still at War in 1973. Once the US withdraws their forces, they are governed by the US Posture Track, which limits the scope and type of Operations and Special Activities that the US can execute. The US Posture Track also controls the US support of the ARVN post-US withdrawal by limiting the Training of Armor, adding Aid via Advise, and use of Air Lift and Air Strike by the ARVN.

Much like the NVA’s War Weariness, the US subtracts Anti-War from their Victory total starting after the Paris Accords. Any shift of US Posture to “Intervention” adds 2 to the Anti-War total, hurting US Victory directly. As to whether that penalty is worth it…well, that depends on the game! 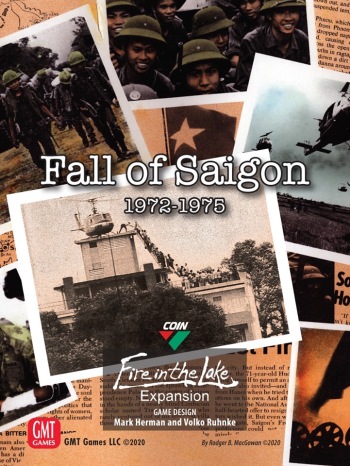 Thanks to the development team for their efforts in writing these up to share with our readers. As one of America’s more fascinating periods of history, the end of the Vietnam War definitely has an interesting story to tell and I am glad to see this expansion being made and look forward to playing again once it is released. We had the opportunity to play with Mark Herman and Dan Pancaldi during WBC last July and it was a blast. Here is a video summarizing our experience: https://theplayersaid.com/2019/09/01/wbc-look-at-fall-of-saigon-a-fire-in-the-lake-expansion-from-gmt-games/

We also posted an interview with co-designer Volko Ruhnke on the blog and you can read that at the following link: https://theplayersaid.com/2019/09/30/interview-with-volko-ruhnke-co-designer-of-fall-of-saigon-a-fire-in-the-lake-expansion-from-gmt-games/

Finally, if you are interested in Fall of Saigon: A Fire in the Lake Expansion, you can -pre order a copy from the P500 game page on the GMT Games website at the following link: https://www.gmtgames.com/p-832-fall-of-saigon-a-fire-in-the-lake-expansion.aspx