My favorite COIN experience is Fire in Lake: Insurgency in Vietnam from GTM Games designed by Mark Herman and Volko Ruhnke. The Vietnam experience is thick in this one and the interplay among the factions is just glorious. We have played the game well over a dozen times and still enjoy every minute of it. In August 2019, GMT announced an expansion to the game in Fall of Saigon which focuses on the end of the war from 1973-1975. Three Fall of Saigon scenarios enable 1-4 players to extend play beyond Paris, beginning before 1968’s Tet, on the eve of the 1972 Easter Offensive, or from 1964 all the way to the end of the war. A standalone 2‑player Black April scenario focuses tightly on the post-Paris sparring between the NVA and ARVN, including the final massive battles, advances, and retreats.

Once the game was announced we reached out to the design and development team to see if we could do a series of Event Card Spoilers and Jason Carr agreed to provide those. We will be hosting 12 of these Event Card Spoiler posts over the next several months and appreciate the effort that both Jason Carr and Stephen Rangazas will be putting into these short write ups intended to share the history of the card as well as their play effects.

*Please keep in mind that the artwork and layout of these cards is not yet finalized (although they are getting close) and is only for playtest purposes at this point. Also, as this game is still in development, card details may still change prior to publication.

By the end of 1968, the Viet Cong’s strength had dramatically declined from their losses during the Tet Offensive and the Accelerated Pacification Campaign (APC) launched by the ARVN and United States. In the summer of 1969, the Politburo issued Resolution 9 stating that communist forces would focus on conserving their strength and focusing again on guerrilla warfare rather than sparking national uprisings or major confrontations with American units. During the post-Tet period, the Phoenix Program further weakened the Viet Cong, though it failed to sufficiently destroy the Viet Cong’s mass political base known as the Viet Cong Infrastructure (VCI). By 1971, the Viet Cong barely managed to hold on with many of their replacements coming directly from the North rather than from the exhausted countryside.

North Vietnam’s major conventional invasion of the South in 1972 relieved pressure on the Viet Cong allowing them to regain some of their lost strength and control over the population. During the Paris Peace Accords, the southern leaders of the Viet Cong pushed North Vietnam to ensure the release of political prisoners held by the South. Instead, the North chose to give up on this position to secure the unilateral withdrawal of American troops. In the period right after Paris, both ARVN and Viet Cong tried to claim as much territory as possible before the ceasefire went into effect.

In July 1973, as the ARVN that year continued to grab territory from the Viet Cong, the Politburo passed Resolution 21 that called for the renewal of armed struggle to protect their existing territory in the South and reclaim areas recently lost to the ARVN. The resolution discouraged large military operations and instead instructed forces to defend against counterattacks and engage in political struggle for the masses.

Fall of Saigon models the exhaustion and depletion of Viet Cong forces through a small but impactful change in how the Viet Cong operate: operations after the Paris Accords cost the VC two Resources instead of one. This simple change forces a more deliberate and lower-tempo from the VC – a tempo that was reinforced by a shortage of rice, a crucial staple for feeding the Viet Cong in the Delta. 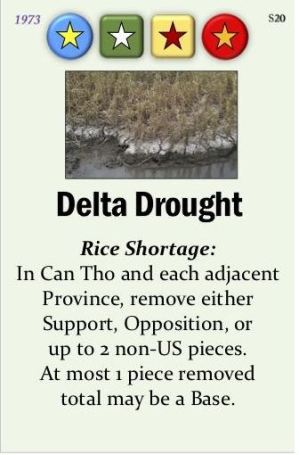 The Mekong Delta faced nearly continual fighting between 1945 and 1975 due to the lack of state presence and the importance of the rice harvest. The nearly impenetrable insurgent bases in the Plain of Reeds and U Minh Forest made the delta a stronghold for first the Viet Minh then the Viet Cong. The Viet Cong in the Delta managed to survive the Strategic Hamlet Program, devastating American pacification operations such as Operation Speedy Express, and the Phoenix program targeting Viet Cong cadres. The concentration of people and rice allowed the Viet Cong to weather these efforts to snuff them out.

In the early 1970’s, droughts and other factors put severe pressure on the Viet Cong forces in the Delta. First, the South Vietnamese finally initiated a large land reform program known as Land to the Tiller that undercut many of the peasant’s reasons for fighting. The Viet Cong also struggled to find recruits as many civilians fled to Saigon or the provincial capitals to escape continual Allied bombing and shelling of VC-liberated areas. Finally, Delta droughts shrank the rice harvest making the situation even more desperate for the people and guerrillas. On the other hand, droughts could also undermine support for the regime and its land reform program (a possibility reflected in the effects of the card).

Droughts in the Mekong Delta have continued to pose problems for Vietnam. The Mekong Delta is in the middle of a devastating drought in 2020 with water down nearly 20% from 2016. Several provinces affected have declared an emergency to confront the crisis.

Thanks to the development team for their efforts in writing these up to share with our readers. As one of America’s more fascinating periods of history, the end of the Vietnam War definitely has an interesting story to tell and I am glad to see this expansion being made and look forward to playing again once it is released. We had the opportunity to play with Mark Herman and Dan Pancaldi during WBC last July and it was a blast. Here is a video summarizing our experience: https://theplayersaid.com/2019/09/01/wbc-look-at-fall-of-saigon-a-fire-in-the-lake-expansion-from-gmt-games/

We also posted an interview with co-designer Volko Ruhnke on the blog and you can read that at the following link: https://theplayersaid.com/2019/09/30/interview-with-volko-ruhnke-co-designer-of-fall-of-saigon-a-fire-in-the-lake-expansion-from-gmt-games/

Finally, if you are interested in Fall of Saigon: A Fire in the Lake Expansion, you can -pre order a copy from the P500 game page on the GMT Games website at the following link: https://www.gmtgames.com/p-832-fall-of-saigon-a-fire-in-the-lake-expansion.aspx