Nevsky is a wargame about the age old struggle between Latin Teutonic and Orthodox Russian powers along the Baltic frontier of the mid-thirteenth century. The game is the first entry in a new series called the Levy & Campaign Series which focuses on pre-industrial age conflicts and, as you can see from the name of the series, requires players to focus on some of the logistics aspects of warfare including providing for the payment and feeding of your vassals and their troops as well as planning out the length of service of your hirelings. This game is a very new experience for me as we had to think differently about how to go about prosecuting a war in a foreign land where you are far from your supply sources and have only a limited time to accomplish your goals before your time is up.

In Action Point 1, we covered the Service Calendar and Levy Phase as well as some of the actions that players can undertake. In this Action Point we will take a look at the Command Deck and how this simple mechanic sets the tone for the game.

The game has two types of cards, including the Arts of War cards that contain Events and continuing Capabilities and Command cards that provide the Lords you have levied with Campaign actions that can be used to drive your focus.

In our last post, we discussed the aspect of planning inherent in the design. This planning aspect is very important and unfortunately has a great deal of uncertainty involved as you are trying to figure out not only what you wish to accomplish, but also somewhat being aware of and anticipating the actions of your enemy. This planning is therefore  hindered by uncertainty and what may or may not transpire during the campaign.

As was mentioned in our look at the Service Calendar, every 40 Days each side will use Levy by Lords and sometimes Call to Arms by higher authorities to Muster soldiers and equipment that they believe will be needed to accomplish their plans. The focus of the Command Deck becomes an exercise in trying your best to carefully consider how to utilize your assets and make the best out of what you have garnered.

Then both sides will Plan their Campaign by building an array of a limited number of their Command cards in a facedown stack, so that their enemy cannot know what it is that they are planning. This building of the Plan will lock in their desired order in which those Lords they select will undertake actions in the coming Campaign. Players may look at their facedown stack during their turn and may also examine the played Command cards of their opponent. Of course, neither side at this time knows what the other side’s Plan is, nor what the other player’s Lords will undertake.

The number of Command cards that are in each Plan stack must equal the following, which is dependent on the current Season as noted on the Calendar:

The Season and each of those Season’s weather determine how many operations you can undertake. This has to do with the focus on the game of logistics and feeding your armies as they move through hostile territory. During the Summer, there is food aplenty as well as game to hunt and provide the provender needed to fight, but during Winter the land withholds her fruits from the players and it becomes hard to do anything. 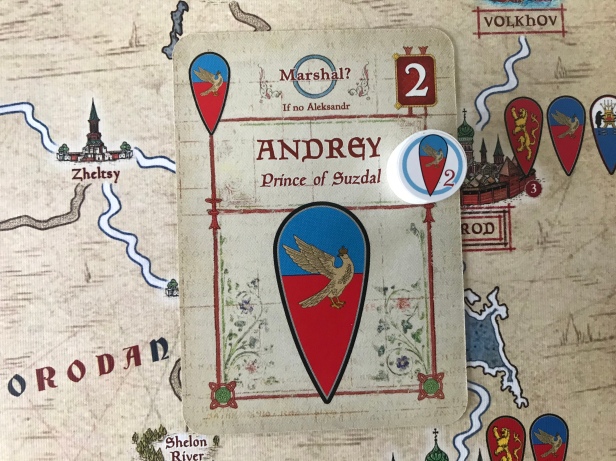 When the player selects the Command cards they will use to build the Plan stack, they can choose cards from any of the Lords they currently have Mustered. If the player doesn’t have enough Lords to fill out the above listed cards total, they may use the Pass cards to include in the stack to make up the difference.

The next part of the process is what is important and will force the player to focus on their plan. Each side builds this Plan stack for the coming Campaign by arranging their cards in order of when they want those Lords to activate and take actions. The first Lord to activate will be located on the top of the stack and the last on the bottom. Any Command cards that are not selected to be used in the Plan stack this turn are set aside and can be used in the next Campaign. Once the Plan stack is built and ordered, it cannot be rearranged. What you have chosen is the order in which your Lords will activate. This is why it is so important to carefully consider a few different things in this step>

How much provender the Lords have and how they will pay their armies once they are moved or activated to fight? What are your opponents Lords going to do so that you can be in position to intercept them or protect against their goals? How are your Lords going to use their assets to make the most of a situation that doesn’t work out the way it was planned? If the player hasn’t considered these questions, they will have a rough time of hit and most likely will be outsmarted by a player who is thinking about these elements when deciding their Plan stack. This Plan stack and the thought required is one of the more subtle and easy to overlook parts of the game. You must plan and cannot simply run around with your head cut off .If you do so, you will be starving before you know and standing on the field alone as your Lords have returned to their castles because of your poor leadership and planning.

After players build their Plan stacks, the Teutonic then Russian sides alternate flipping over the top current Command card on their stack. After the Command card is revealed, the revealing side will take actions with the Lord shown on the card. Each Lord may execute a series of Commands based on the Command Rating shown in the upper right hand corner of the card. Each action costs one of those points and these actions include March, Siege, Storm, Sally, Supply, Forage, Ravage, Sail, Tax and Pass. Sometimes, Capability cards in play for the Lords will add various advantages to these actions but we will cover those in the next post.

At the end of each Command card, those Lords on both sides that have Moved/Fought must now feed their Forces. After feeding, Lords on both sides may receive pay and might at this point disband and return to their estates. Remember that if a Lord has 1-6 units they will have to spend 1 Provender counter or Loot to feed them but if they have 7+ units, the cost will now increase to 2 Provender or Loot counters. If you run short with one Lord in the same locale as another of your Lords, they can feed your men by discarding the needed counters.

The Command Phase is fairly straight forward but as I have mentioned requires some thought and planning. There is nothing worse than seeing your strong army simple leave the field because you cannot pay them due to forage being scarce during the Winter or you having too many men and not enough Provender or Loot.

In Action Point 3, we will take a look the Arts of War cards that contain both Events and Capabilities and bring some very important special abilities to your forces

Also, if you are interested, we posted an interview with the designer on the blog and you can read that at the following link: https://theplayersaid.com/2018/07/09/interview-with-volko-ruhnke-designer-of-nevsky-teutons-and-rus-in-collision-1240-1242-from-gmt-games/