Nevsky is a wargame about the age old struggle between Latin Teutonic and Orthodox Russian powers along the Baltic frontier of the mid-thirteenth century. The game is the first entry in a new series called the Levy & Campaign Series which focuses on pre-industrial age conflicts and, as you can see from the name of the series, requires players to focus on some of the logistics aspects of warfare including providing for the payment and feeding of your vassals and their troops as well as planning out the length of service of your hirelings. This game is a very new experience for me as we had to think differently about how to go about prosecuting a war in a foreign land where you are far from your supply sources and have only a limited time to accomplish your goals before your time is up. Well, now that I think about it, that statement isn’t actually true as I have played lots of East Front WWII games where the Germans are invading Russia. This game is kind of that situation just 700 years earlier before there were tanks. But rather than tanks, carts and sleds are your mobile units.

In this series of Action Points we will cover the Service Calendar and Levy Phase as well as some of the actions that players can undertake, take a look at the Command Deck and how this simple mechanic sets the tone for the game, look at the Arts of War cards that contain both Events and Capabilities and bring some very important special abilities to your forces and finally examine the Campaign Phase taking a look at various units, Battle, Siege and Storm.

At the center of the game stands the Calendar which tracks both time and victory. During any one of the scenarios one or more Seasons, including Summer, Early Winter, Late Winter and Rasputitsa will be tracked on the Calendar. You probably don’t recognize Rasputitsa but it is a Russian term for two periods of the year when travel on roads or across country becomes difficult due to extremely muddy conditions from rain or thawing snow. Each of these seasons has two spaces on the Calendar.

On the Calendar players will place the Lords that they can Hire into service for a period of time which is 40 days. Players place the Lords that they can into the seasons for which they are available to hire and they can then be moved on the Calendar based on Event cards that are played by either you or your opponent. We will cover this a bit later in the series but those Event cards can really mess with your plan and you will have to be aware that they are a possibility. 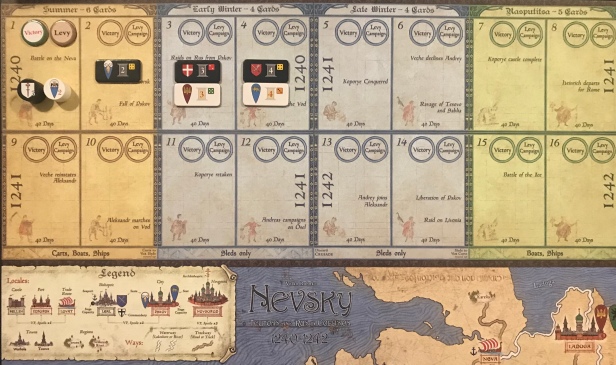 The very interesting part about the design is that you will have to worry about when the service periods will end for your Lords and Vassals. Unlike other wargames, your soldiers are not necessarily around and available for the entire game. They have a choice to leave and it is up to you to change their mind. This Calendar system places the onus on you as a player to plan and then to get going with that plan. You will have to know when your time is up and then plan for how to pay those whose time is expiring to get them to stay with you a bit longer. This payoff will be in the form of Coin or Loot and is a major focus of the Levy Phase.

The Levy Phase happens at the outset of each 40 day period and gives the players an opportunity to plan for that season’s campaign. Players will have to add forces to their existing armies and also obtain assets.

Here is a look at a few of the Lords available to the Teutonic player, Hermann Bishop of Dorpat and Knud & Abel, Princes of Denmark. According to the scenario being played, each will find themselves starting in certain spots on the map. For example, Knud & Abel start in the port of Reval. You might have guessed this as they have Ship assets that will aid them in moving upon the waves to attempt to harass and assault the Rus in one of their sea ports. You will notice that Hermann has a Cart asset that will require him to move along roads and he will have to stop at rivers until he purchases boats or the season changes to winter at which time he can convert his Card into a Sled and then move along the frozen water.

You will also notice that each of the Lords has a certain amount of forces already in their army and have other available Vassals that can be hired to bring their forces to bolster the army. Look in the bottom right hand corner of each card you will see that there are Vassal markers placed their. In the left of the marker you will see a Coat of Arms that identifies that they are aligned to each of the different Lords as they carry their symbol. In the middle are shown the forces that each of these Vassals provide in the form of colored shapes that correspond to certain types of units. For example, in Hermann’s top most Vassal available they will bring a Knight (the white triangle) and a Men-at-Arms (the gray rectangle). To the far right of the marker is the Lords Service Rating which shows how long he will be in the service of the Lord. Once hired, these Markers are placed on the calendar to show their end of service. Lordship is the number of Levy actions the Lord takes during a round and Command is the number of Actions a Lord can take each time his Command card is revealed.

The Lord’s Ratings are found in the upper right hand corner of the Mat and are used throughout the game for various checks. Fealty is the die-roll range for that Lord’s desire to muster when another Lord tries to Levy him. Service is the number of 40 day boxes ahead of the current season box on the Calendar that the Lord’s marker or cylinder are placed. 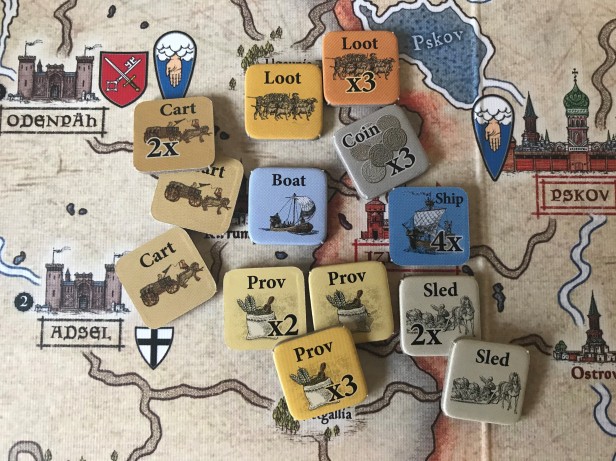 I have used the word plan several times in this post because you should be asking yourself what you are trying to accomplish this season. Are you planning to siege a castle? If so, you will have to think about the number of forces you have and how many it might take to put up a good siege. Remember, a Lord can only Muster new forces from a friendly locale and not while a siege is ongoing. You will also have to consider how much Provinder you have and how you are going to carry that with you and will need to think about Levying Transport. You also have to remember that feeding your men requires you to have and use 1 Provinder or Loot per Lord with 1-6 units. If the Lord has 7 units, this will cost you 2 Provinder or Loot. You can’t just buy that and if you don’t have good Supply sources set up yet you must Forage for Provinder in the field and you will receive Provinder depends upon the season. You can also get some Provinder and Loot from Ravaging the countryside but you have to be able to carry it or you won’t be able to take it with you. These elements allow you to move out into the unknown without having what you need to sustain you from the start but you have to plan how to get what you need. I really like that and it has caused me to think very differently about the game’s vision.

I have really been impressed with this system and how it has taken something as mundane as supply that we are all so familiar with from our play of operational games and turned it into an exercise of planning for the players. It has added the minutiae to the game and forced you to consider so much about the terrain, the season, your troops and their Lords and how you are going to do everything that you have to do in a 40 day season. Plan poorly and you will find that you don’t have the ability to move any further because you can’t feed your army. Not having the Coin or Loot to pay your Vassals to stay in the field can also be devastating. If I had one complaint about the focus on the logistics and how important they are I would say that it is a bit delicate and requires several plays to master this basic function. This isn’t a bad thing in general because it provides new lessons each time you play but a new player will almost always struggle and be destroyed by a seasoned player. The Levy Phase is one of the most important of the game and will provide you opportunities to plan for a successful 40 Day Campaign each year if you keep in mind your objectives, your limitations and understand what you require.

In Action Point 2, we will take a look the Command Deck and how this simple mechanic sets the tone for the game.

Also, if you are interested, we posted an interview with the designer on the blog and you can read that at the following link: https://theplayersaid.com/2018/07/09/interview-with-volko-ruhnke-designer-of-nevsky-teutons-and-rus-in-collision-1240-1242-from-gmt-games/