Ottoman Sunset The Great War in the East: 1914-1918 is a member of the States of Siege series put out by Victory Point Games (VPG). These games are solitaire only and are known for being short, challenging and historically informative. I’ve previously played Zulus on the Ramparts, which was a total blast but was also on a very different scale. Zulus is a tactical game, with individual officers and enlisted men performing volley fire at your command. Ottoman Sunset however is a strategic level game that focuses on fronts moving, with battles like the Somme and Paschendale being fought off map. The WWI theme is what intrigued me most about this game, as well as my deficient knowledge of the decline of the Ottoman Empire.

The Ottoman Empire was juggling a lot of different issues at the outbreak of the Great War and Darin Leviloff tried to put as many of those in the game as possible, whilst keeping it playable, and most importantly enjoyable. You’ll be fighting hordes of the usual enemies coming down the tracks, which is par for the course in the States of Siege series. On top of that though, you’ll be expected to help (or not) with the outcome of almost every major battle in the War. These are conducted off map, but you can spend your precious resources to help win these battles.

Some of my favourite aspects of these games are that the decision making is extremely tight. I played through two thirds of the game the first time I played (I lost) and there was maybe two turns where I felt like I could do everything that I needed to. Usually I butchered the offensives because I rolled horribly, but I at least had the opportunity to do everything. But on every other turn in the game, when you need to do three or four things, you can only do one or two. And that tension and frustration, with each card flip and front activation, gives a palpable sense of impending doom. And I love it! The best part is that the game is still very short and actually pretty low stakes. If I lose, then I only spent half an hour and minimal set-up time in a losing effort. Losing solo games that took hours and hours can be a little disheartening for some, but this series of games doesn’t carry that with it in my opinion.

Like I said earlier, Ottoman Sunset is a strategic level game. You’re combating entire fronts, which is very different in feel from Zulus on the Ramparts.  Perhaps its just a mind-set thing but I felt like these two games were wildly different, even though they are mechanically very similar. The tracks down which the enemies travel towards you are exactly the same in function, but scale of the games is evident in the card decks. Zulus has individuals listed on each card, and details about their involvement in the Battle of Rorke’s Drift. Ottoman Sunset however describes great battles, or turning points in the war on each front, as well as changes in policies at home and abroad that effect your war effort.

In Zulus, the Enemy has a stack of strength counters underneath and each successful offensive can weaken them permanently. Ottoman Sunset is at a scale such that a single offensive won’t damage the fighting power of the front, but can force it to retreat. In this way, you feel a little more pressure than Zulus, because the 4 strength front just keeps a-comin’. I felt like Ottoman Sunset was much more of a delaying tactics game, whereas, in Zulus I could damage and kill the enemy making my life significantly easier (I still lose almost every time but it’s possible to win). 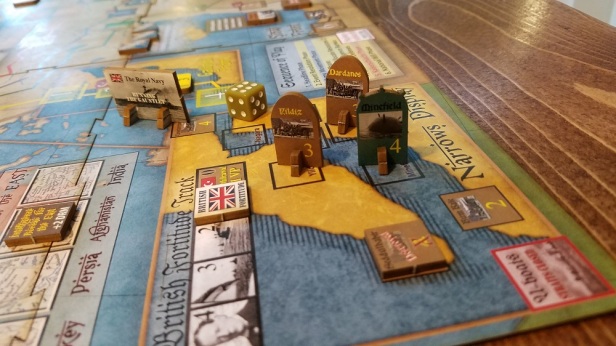 I lost my initial game by having the Royal Navy ‘run the gauntlet’ and sail straight past my coastal defenses to capture Constantinople. I hadn’t even neglected that ‘mini game’ so to speak. I had built two guns and laid a minefield (not to mention the printed guns on the board), but the dice favoured the Navy and they broke through with 1 Will power remaining. There’s plenty to do outside of just fighting fronts, building those coastal defenses, trying to gain positive modifiers for off-map battles (which give you VPs if you win the battles, and the game). You’re also trying to curry disfavour in India and Afghanistan amongst other places. Historically you’re trying to disrupt British trade and operations in that part of the world to detract their potency on the Western Front. There’s a bureau of intelligence you can utilize to try and boost your capacity to incite coups in those regions as well.

Is this for me, then?

Yeah. Yeah it is. This is a really fun game. I enjoyed the theme a lot, because it was a great learning experience for me. My play time was probably a little longer than printed but that’s because I spend time reading the historical background on every single card I turn over. This is just a theatre of the war that I didn’t know very much about and having played this game I learned a lot about not only what went on internally within the Ottoman Empire, but also about how European policies and the war effort affected Ottomans.

All of the SoS series are quick and dirty, they’re almost over before you know it, but this one was both extremely challenging, as well as a fascinating topic to play with. For the price point you can’t beat this game at this level. I’d highly recommend it.

3 thoughts on “Review: Ottoman Sunset The Great War in the East: 1914-1918 from Victory Point Games”