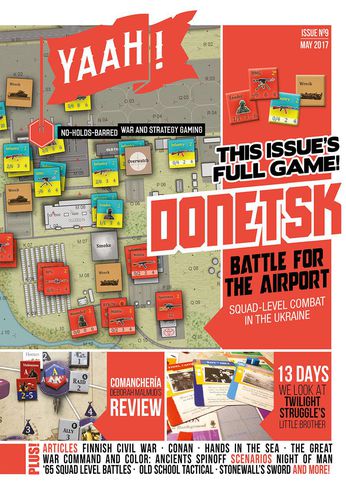 Donetsk: Battle for the Airport is the feature magazine game included in YAAH! #9 from Flying Pig Games.

Donetsk is not like most tactical level games on the market. First, it differs in scale – while units are relatively small (squads, individual teams and vehicles) the hexes are relatively large (approx. 150m). This was done to simulate the relative emptiness of the modern battlefield as compared to earlier conflicts. Modern combat units move slower and more cautiously due to the increased range and lethality of modern weapons. These factors explain why leg unit movement factors are low and there are no ‘close assault’ rules like earlier conflict period tactical simulations.

Second, even though the battle was called Little Stalingrad, unlike the forces involved in that pivotal WW2 battle, the forces in these battles were very brittle. It did not take many setbacks and casualties before a side lost their aggressive spirit and will to fight. The central game mechanic that depicts this, which the player needs to manage, is initiative /Hesitation. Protecting your Initiative Level is critical to keeping your tactical options and chances for victory open. Initially the player with the highest initiative normally gets to activate first – especially if in a close quarters battle in the Terminals the ability to fire first or withdraw from a bad situation before the other side can fire can be critical. Later, if your initiative level drops to your Hesitation Level then your options become very limited. If on the Offensive, the player is left with ranged fire hoping to attrition the defender to victory. If on the Defensive, then the other player can be more aggressive and it becomes very hard to hold important objectives in the face of a determined assault. Therefore, being sensitive to casualties is critical to winning.

As I have said before of these magazines, there is always a lot of content for the price.