I love the Card Driven Game mechanic and how it pits players against each other. The mechanic is very well suited to any game where two ideologies are fighting for control and I found a really good implementation of the system in a game from Compass Games called Prelude to Rebellion: Mobilization & Unrest in Lower Canada, 1834-1837. This game depicts this conflict of ideas as a CDG using key events from 1834 to 1837 as the Patriotes and Loyalists fight for control of the electorate. The player will have many choices presented to them in how to use their cards and will be torn between using each for the card’s Activity Points or the Event while doing their best to fend off and undo your opponent’s cards. The overall focus of the game is that the player will fight to mobilize the people of the various counties of Lower Canada and rally them to their point of view. In addition to Montréal and Québec, 24 rural counties, with each having a bias towards a faction, are represented on the board. Every county has a number of Mobilization Boxes, each costing a number of Activity Points to place a cube in. Whoever has the most cubes in a County is said to control it.

In Action Point 1, we covered the Game Map and discussed the Mobilization Boxes, Scoring Tracks, Turn Track, Rebellious Spirit Track and took a look at the Opportunity Pool. In this Action Point we will take a look at the cards and discuss their use either as an Event or for the Activity Points.

As the design is a Card Driven Game, it relies heavily on the use of cards to play as you would expect. The cards are well laid out graphically and have lots of great text and historical information that makes the game not only fun but informative as well. The first thing that I would like to do is take a look at the anatomy of the cards.

At the top center of the card is the icon that represents which faction the card belongs to. The cards can be Patriote aligned, Loyal aligned or be Neutral which is denoted with both faction flags being shown on the card. In the upper right hand corner are two key pieces of information in the Deck and the Activity Points. 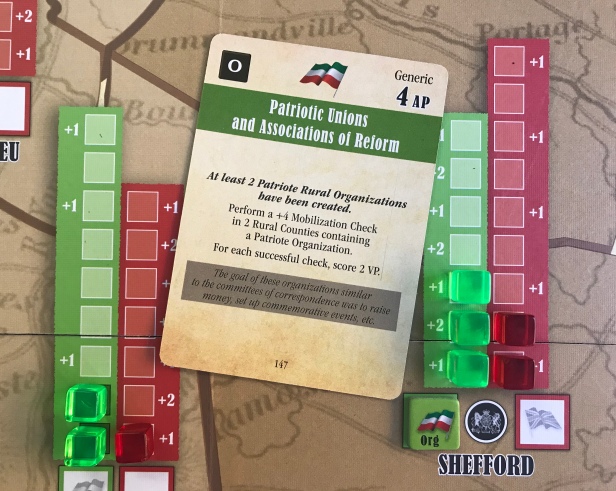 Each Turn is also associated with a Deck, which is referred to as the Active Deck, from which most of the players’ cards for a turn will come from. Three of these decks are sorted by the year and are the 1834, 1835-36 and 1837 Decks which contain Events that are specific to these years. There is also a fourth deck, called the Generic Deck, which contains Events that did or could have occurred at any time during the period covered by the game. Each of the Decks will be used for a limited amount of time during the game covering those years in turns and once they are over, the Deck will be removed from the game and replaced by the next deck in sequence. I really like this as you will not play all of the cards in any given year’s Deck and therefore this offers quite a bit of replayability. 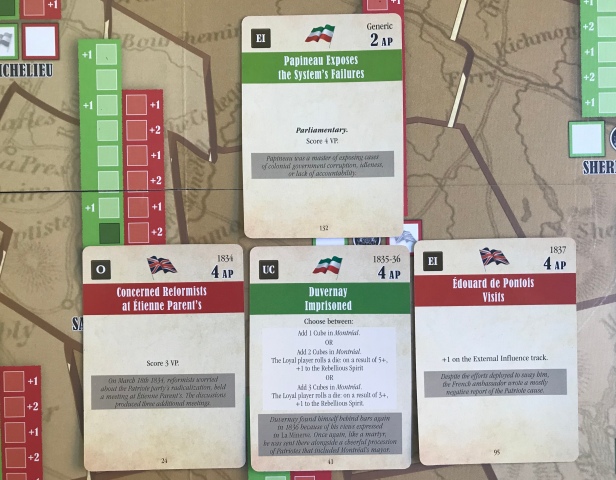 The Activity Points are important as they offer the player the currency to be able to take various actions that are important to the game. When a player plays a card for its Activity Points they receive the card’s Activity Points value and may spend it to perform one or more actions. It is also very important to remember that it is possible to perform more than one type of action in the same Action Round. The actions that players can use Activity Points to take are Mobilization (placing cubes into a County), Creating Organizations (creating a center for control of the county and for scoring Victory Points on the Rural Organization Scoring Track), Call for Composure (once per turn the Patriote player can try to keep the Rebellious Spirit Marker from increasing at the end of the turn but there is a price to pay as it will cost more AP’s as the game moves from year to year with 2 AP’s in 1834, 4 AP’s in 1835-36 and 6 AP’s in 1837) and Volunteer Corps Recruitment (the Loyal player can recruit Volunteers to provide Victory Points into the War Readiness Box). We will cover these Actions as well as the various Special Actions available in the next post in this series.

The title appears at the top of the card in a colored banner associated with each of the different factions. The Patriote aligned cards have a neon green banner while the Loyal aligned cards have a red banner. The title of the card is for historical flavor only, although sometimes the cards will provide certain prerequisites such as a specific card must have been played to allow this Event. I like to have the names of the Events or historical happenings so I can look them up on my iPhone while we play so I can learn as we play.

In the middle section of the card is the most important information. Here is printed the Event that can be played by the owning faction player. As mentioned above, there will sometimes be a necessary condition to play the card for the Event and it will typically be printed at the top before the text of the Event. The text following this prerequisite discussion will be the information that the player needs to use the Event rather than the Activity Points. Typically, the Events are very good and will provide greater benefit to the player than simply using the AP. For example, if the Event text directs the player to place a certain amount of Mobilization Cubes into Mobilization Boxes in Counties, this will ignore the additional costs listed to the side of the Mobilization Box. This can make more of an impact than simply using the AP to try to place the same Mobilization Cubes in the boxes while paying the additional costs if the County has a bias toward your opponent. The Events can also somewhat break the rules and allow the player to take actions that are normally not allowed or otherwise limited. Each time the player decides to play a card they must do an internal cost-benefit analysis to see how they should be using the card. This will increase your efficiency in using your limited Activity Points and provide you with the greatest impact possible. Of course, sometimes it makes sense to ignore a good Event text if you simply need to control a County with one additional Mobilization Cube before scoring at the end of a round. That is what makes the game great and the CDG mechanic so interesting; the choices and strategy that you must use to be effective and have a shot at winning. 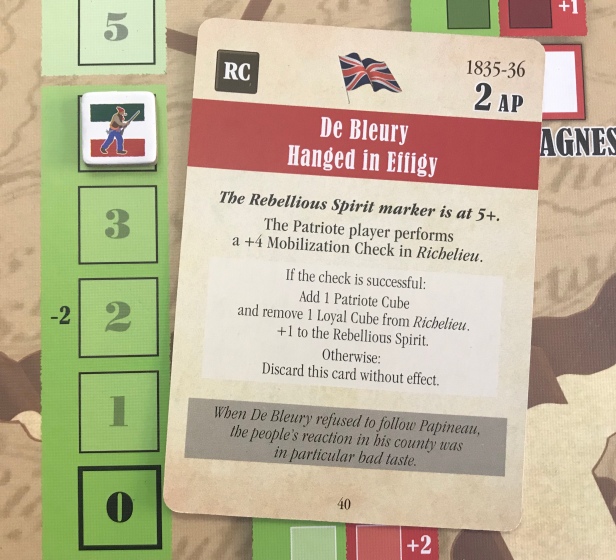 At the very bottom of the card is the historical text located in a grey box that gives the players the background about the history of the conflict.

Finally, in the upper left hand corner of the card is the Scoring Die. Each card has one of four Scoring Dice printed on it including Rural Counties (RC), Organizations (O), External Influence (EI) or Urban Counties (UC). Immediately after playing the card, the player rolls the specified die and advances the Scoring Marker of the track rolled by one box. If that brings the Scoring Marker to the end of the track to rest in the Score Box the players will then go through the Scoring Sequence detailed under the relevant Scoring Tracks section. We will cover this aspect in a later post.

Now that we have a good idea for the layout of the cards and the different relevant points, lets now take a look at how these cards are used.

When a player plays a neutral card from their hand, they can either play the card’s Event or play the card for its Activity Points. If you play a neutral card from your hand for the Event, it is discarded. If you play it for the AP’s, that’s when it goes to the Opportunity Pool. That makes it an even tougher decision as even if the event is not that good for you at this point, you know you’re making it available for your opponent. This is important in the mechanics of the game as these Opportunity Pool cards are the only thing preventing you from having to play your opponent’s good Events just to take a few measly Activity Points. This mechanic makes sure you have a somewhat continual and dependable source of diversion cards to play. Really an interesting addition to the genre and we really enjoyed it, while also not enjoying it when my cards were not played.

Finally, when a player has no other reasonable choice aside from tearing the card up and burning it and plays a card associated with the opposing faction, they must play it for its Activity Points. Then the bad stuff happens. If the Event’s prerequisite is met, their opponent gets to play it, making all indicated decisions. The card is then discarded unless the Event states otherwise. If the Event’s prerequisite is not met, the card is placed in the
Opportunity Pool and your opponent gains Opportunity Points equal to half the Activity Point value of the played card. This is where the concept of making lemonade out of lemons comes into effect with this iteration of the CDG. Having to play those opponent cards will just ruin your day! Sometimes you can avoid them immediately but you know that because they go into the Opportunity Pool where your opponent can spend their Opportunity Points to get them you are simply avoiding the immediate pain for pain in a following round or turn. But that is ok as your opponent will also be faced with that same difficult choice and pain. It is such a delicious part of the design and keeps this one on the unique end of the pool with CDG’s. 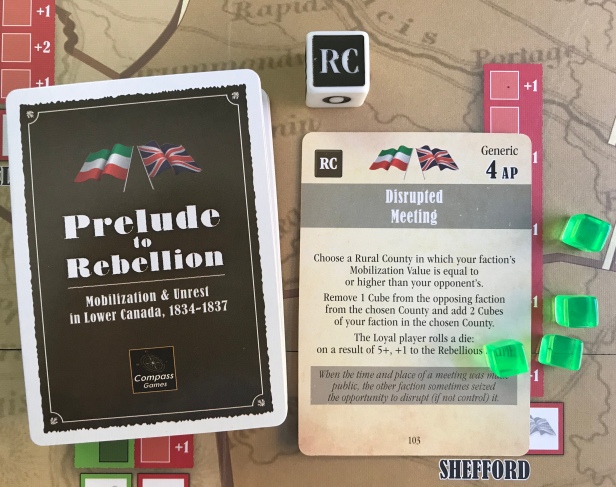 In Action Point 3, now that we understand the cards we will dive into how you can spend your Activity Points and how they are used to battle for control of Counties and also discuss the Special Actions available to each player.