I love the card driven game mechanic and how it pits players against each other. The mechanic is very well suited to any game where two ideologies are fighting for control and I found a really good implementation of the system in a game from Compass Games called Prelude to Rebellion: Mobilization & Unrest in Lower Canada, 1834-1837. This game depicts this conflict of ideas as a card-driven game using key events from 1834 to 1837 as the Patriotes and Loyalists fight for control of the electorate. The player will have many choices presented to them in how to use their cards and will be torn between using each for the card’s Activity Points or the Event while doing their best to fend off and undo your opponent’s cards. The overall focus of the game is that the player will fight to mobilize the people of the various counties of Lower Canada and rally them to your point of view. In addition to Montréal and Québec, 24 rural counties, with each having a bias towards a faction, are represented on the board. Every county has a number of Mobilization Boxes, each costing a number of activity points to place a cube in. Whoever has the most cubes in a county is said to control it.

The Game Map is simply huge (22″ x 34″) and is mounted so it is very nice and really stretches out over the tabletop. The map shows western Lower Canada and is divided up into 26 different Counties that were actual electoral districts at the time. The makeup of these Counties is 2 Urban Counties, that include both Montréal and Québec and are located in the upper right hand portion of the map, and then 24 Rural Counties.

Each of these Counties has a vertically oriented Mobilization Box that has spaces that hold what are referred to as Mobilization Cubes. These Mobilization Cubes represent the influence with the electorate that the differing factions held over the voters in the game. The green Cubes are the Patriote Faction and the red Cubes are the Loyal Faction. The number of Cubes that that have been placed for each player in a County is called the Mobilization Value and is the main focus of the game as players will jockey for control of these Counties for victory points.

Some of the Counties will start the game with a number of Patriote or Loyal Cubes and these will be indicated by the darker colored background for each side. For example, in the picture below you will notice that Saint-Hyachinthe County has two green boxes that are darker than the others. This indicates that these two spaces start with Patriote Cubes in them.

As you examine the Mobilization Box, you will also notice that in one of the white boxes located at the the bottom, which are called Rural Organization Placeholders, is a flag icon. This flag represents a Bias for one of the two factions in this County. This Bias simply means it is a bit easier for the identified faction to place Cubes on the Mobilization Track. For example, in the picture above you will notice a difference in the costs to place Mobilization Cubes in Saint-Hyacinthe along both sides of the Mobilization Box. The base cost for Mobilizing any Rural County’s box is always 1 AP. If there is a white number beside the Mobilization Box this means that there is an additional cost that must be paid to Mobilize that specific box.

Another key distinction in the cost to Mobilize is that if a player has a lower Mobilization Value (the total of all of their Cubes on the Mobilization Track) than their opponent at the time they are adding a Cube they will pay -1 AP at that time to a minimum of 1. This is somewhat of a catch up element for players when they are behind.

Urban Mobilization is a bit of a different animal as the costs are a bit higher for both players. To me this is very thematic as they effort needed to reach people in the dense Urban population areas is a bit more involved. True there are more opportunities to access a large group of voters in Urban Counties but there is just more space to cover. This is the reason for the differences in cost.

The base cost for Mobilizing an Urban County box is 2 AP. The same as in a Rural County, a white number beside the Mobilization Box means there is an additional cost necessary to Mobilize that specific box. The major difference between Rural and Urban Counties is that there is no cost reduction for trying to catch up with your opponent in an Urban County.

This battle between the 2 players for the control of Counties with Mobilization is very easy to understand and simply turns into a continual back and forth for control of various Counties. Players can use the Activity Points on the card to place individual Cubes on these Mobilization Tracks but also will find that sometimes the cards have Events that allow for several different actions in regards to placing and removing Cubes. Sometimes these cards will allow for multiple Cubes to be placed but might have limits such as only 2 per County or in a County where there is Patriote or Loyal control. The player must make a choice about how best to use the cards they have in their hand from round to round but this is a subject we will cover more in the next Action Point in the series.

Four separate tracks are used to measure the effectiveness of each player as it relates to the key issues that were involved in the conflict. These Scoring Tracks each have an Advantage Marker showing which of the players is favored in each area as well as a Scoring Marker that will advance one box to the right each time a card is played. When this Scoring Marker reaches a Score Box it will trigger a specific sequence of different activities. Also at this time, the player who is favored on the track will receive a number of Victory Points.

The four tracks are the Rural Counties, Organizations, External Influence and Urban Counties. We will cover each of these 4 tracks later in the series as we discuss scoring but for now you know what these tracks represent.

The Rebellious Spirit Track measures the animosity and urge to rebel of the Patriote Faction and how close they are to actually initiating a total uprising. As you can see in the picture below, this track is a vertical track that starts at 0 and can be increased via various Events until it reaches the 15 space where the any VP markers found in the War Readiness Box will be scored. Many of the Events found on the cards will have a requirement that the Rebellious Spirit Marker has reached a certain number before they can be played.

Once the Rebellious Spirit Marker has reached 8, the Loyal player can then actively try to increase the level by recruiting Volunteer Corps. This is marked on the track with crossed muskets to remind the player. This is something that the Loyal player should be considering as it allows for Patriote Cubes to be removed from the Rural Counties giving a chance to seriously change the Rural Counties scoring. 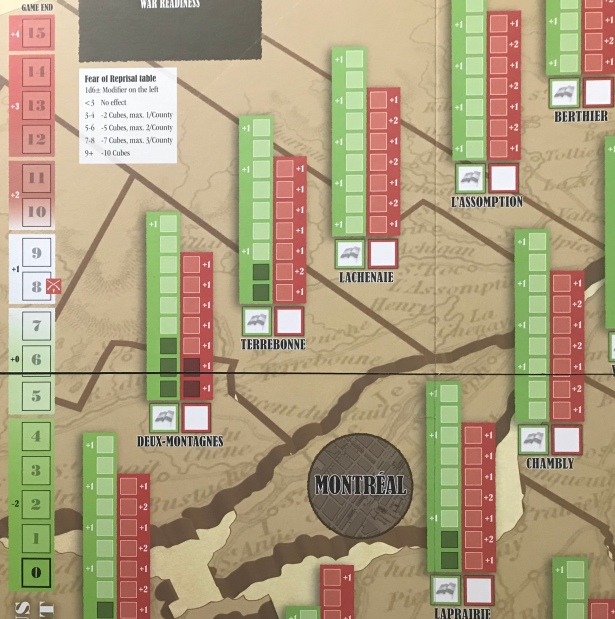 At the end of any turn, unless the Patriote player performed the special Call for Composure action that can be played once per turn at a cost of 2 Activity Points, the Rebellious Spirit Marker will increase 1. The Patriote player has to be aware of where the Rebellious Spirit Market is at and what the consequences for ignoring this aspect of the game is. If it gets out of hand, you can see on the Fear of Reprisal Table that the Loyal player can be removing up to 10 Cubes from Rural Counties and this can erode their advantage quickly.

A game can last up to 7 Turns and every Turn consists of 8 Action Rounds during which each of the players will alternate playing a card from their hand or from the Opportunity Pool. With this in mind, each of the rounds will consist of both a Patriote and Loyal player Action and the players will keep track of this on the Turn Track using a double sided Turn Track Marker. One side of the Marker has a Patriote flag and the other a Loyal flag and will be flipped after each Action is taken.

You will also notice in the picture below that each of the Turns is associated with a Deck. The 1834, 1835-36 and 1837 Decks each contain specific Events for that year of the conflict. There also is a fourth deck that is referred to as the Generic Deck and it contains Events that can occur at any time along the Turn Track. 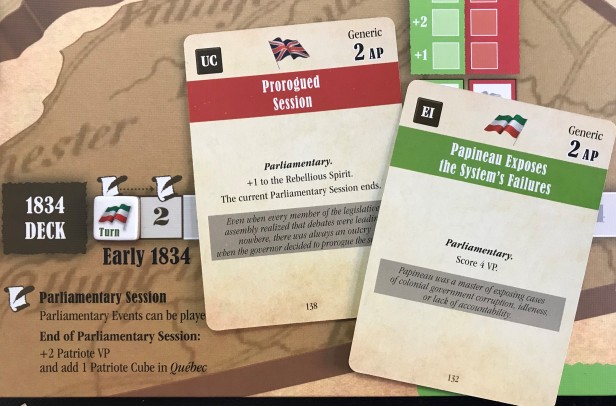 Why is this Opportunity Pool so important? Well, in this design if you play a card with your opponent’s Event for the AP, that Event will go off for them. We all know that with CDG’s that holding your opponent’s Events so they cannot get to them is important but you sometimes have no choice and simply have to play them. The purpose of the Opportunity Pool is to allow you to spend your Opportunity Points to play the cards located in your section of the Pool instead of playing an Event from your hand that will aid your opponent. This cat and mouse game can get you out of a lot of jams but sometimes you will be unable to play any cards from the Opportunity Pool because you have no cards there or don’t have enough Opportunity Points to pay the cost. I love this part of the design and we will discuss it more in our next post in the series.

I really enjoyed this game and simply love the layout of the Game Map and the excellent but simple graphic design that makes playing the game so simple. I also really enjoyed all of the different Scoring Tracks, the Rebellious Spirit Track and Turn Track and how you have to give them all attention during the game or you will find yourself on the wrong end of the rebellion. I am really excited about the chance that I have to share this game with you as it has really become one of my most favorite 2-player CDG’s that I own.

In Action Point 2, we will take a look at the deck makeup and the differing types of cards and discuss their use either as an Event or for the Activity Points.