Agricola, Master of Britain is a solitaire wargame that focuses on the struggle of the Roman Legions led by Gnaeus Julius Agricola the Roman Proconsul of Britain from 77 to 85 AD. Agricola spent his time in country as Proconsul attempting to pacify the Britains, consolidate Roman occupation, and subdue the various tribes. The game is designed to allow the player an opportunity to attempt to take on the role of Proconsul and apply military, diplomatic, and economic power to achieve these goals. The player must use their available Legions to attack tribes in outright revolt and then use more subtle tactics and bribery against others to conquer all resistance to allow for the Empire in Rome to prosper. The game uses a 3 Chit-Pull Cup system that represents different levels of allegiance of the different tribes on the island. Each action taken by the player will cause a chain reaction in these cups, either positively or negatively for the Romans. The player must build the right Units, investing in infrastructure in the form of Garrisons and Settlements, and build a victory point engine to accrue the required VP’s to meet the expectations of the Flavians and your allies in Britain.

In Action Point 1 we took a tour of the mapsheet becoming familiar with the various Legionary Camps, which serve as staging areas, and Tribal boundaries and discuss the Roman Legions and how they compare to the game’s 16 different Tribes. In this Action Point, we will investigate how the 3 Chit-Pull Cup system works and how the player can manipulate the cups to their advantage. 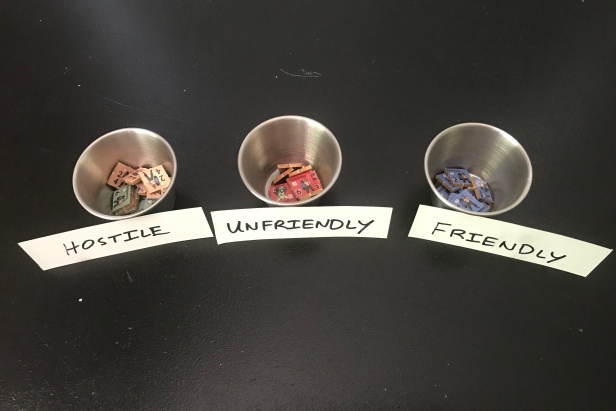 One of the really interesting and innovative aspects of this design is the 3 Chit-Pull Cup System. The 3 cups each have a title and specific disposition of Tribes are placed in them. These titles include Friendly, Unfriendly, and Hostile and abstractly represent the allegiance and attitude of the different Units contained within the cups to the Roman occupation. After each action taken by any Roman Legion on the mapsheet, the player will reach into these cups and take one or more of the Units and blindly move them from their current cup to another cup as identified by the action.

To understand these cups, let’s first take a look at how the cups are setup at the game start. Remember from our 1st Action Point, each of the various Tribes are identified by color on the map and by their counters. In the southeast of Britannia are the Blue Tribes, which include Tribes that are friendly to the Roman occupation. At the start of the game, the Blue Tribal Units are all placed into the Friendly Cup. None of these units will be placed onto the mapsheet at setup and it is only during the late game typically that a few Blue Tribal Units will end up in the Unfriendly or Hostile Cup. 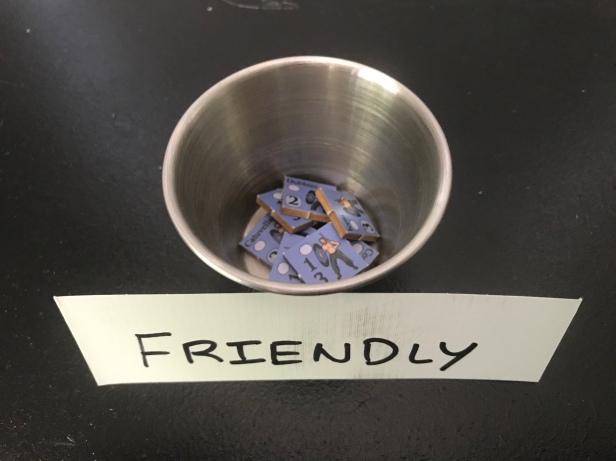 To the west are located the Tan Tribes. These Units are placed on the mapsheet during setup and are initially Hostile to the Romans and will be the source of trouble as the player attempts to subdue this region so the focus can be pointed to the north. At the outset of the game, the player will place all Tan Tribal Units into the Hostile Cup. The only unique element about the Tan Tribal units during setup is that the player will draw a certain number of these Units and place them in the appropriately named Tribal Boxes on the mapsheet. 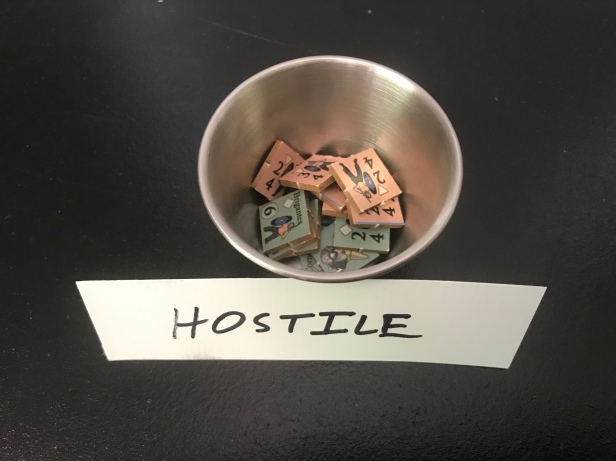 The Green Tribal Units are tough and their placement on the mapsheet is such that they can Raid the Legionary Camps as they have two Tribal Boxes adjacent. During the Housekeeping Phase, if there are 3 Tribal Units or 2 Tribal Units and a Leader adjacent to a Settlement or Legionary Camp and there are not Legions or Garrisons in these spaces, a Raid will occur. If this happens, each such Raid will reduce the Roman Treasury by 2. If the Treasury is reduced to 0 through a Raid, the game will immediately be lost.

The Red Tribal Units are vary powerful but are located in the far northern Regions of Brittania, and as such are not immediately concerned with or hostile towards the Romans and their presence. All Red Tribal Units are placed into the Unfriendly Cup at the start of the game along with their Leader Calgacus.

Early on in the game, Red Tribal Units will generally not be drawn until certain actions are taken that will force an adjustment in the cups. For example, if a Suppress Action is taken the player will be directed to move 1 Unfriendly Tribal Unit to the Hostile Cup. At the start, this will be a Red Tribal Unit that will move to the Hostile Cup. So, with more and more actions taken by the Romans, Units will quickly be moved from Unfriendly status to Hostile and will start to cause a lot of trouble for the player. After the Cup adjustments are made, the action will also specify a number of Hostile Tribe Reactions that must happen. A Hostile Tribe Reaction is simply the player reaching into the Hostile Cup, drawing out a Tribal Unit and then placing it in that Tribes named Box on the mapsheet. This represents being incited to action against the occupying Romans and will lead to more units that must be removed by the Romans to gain control of the different Regions. Control is important because the player will receive 1 VP for each region that is free of Tribal Units at the end of the Turn.

In the rulebook, Tom Russell placed these very interesting statements from Tacitus, a famous Roman orator and public official who was known as probably the greatest historian. Under the Suppress Action, the following statement appears:

The Britons dwelt much amongst themselves on the miseries of subjection, compared their wrongs, and exaggerated them in discussion. 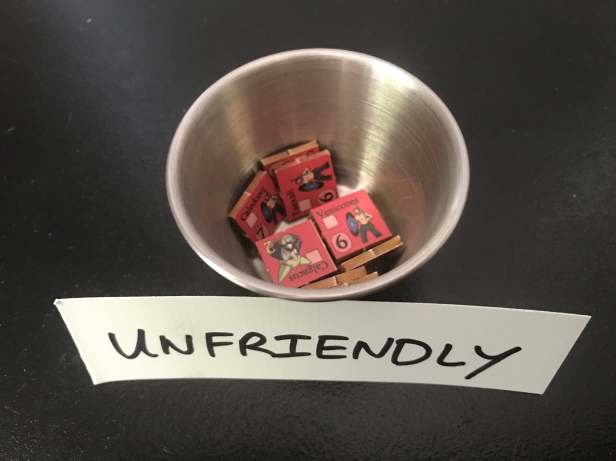 This whole Cup Adjustment concept is frankly innovative and a very interesting mechanic. It represents how the Romans are viewed by the Tribes and how the locals view their rulers. It does force the player to deal with the consequences of their actions and creates an exercise in governing without creating a tipping point and forcing the Tribes to revolt. Each Game Turn, the player must think about how their actions will change the landscape and what might happen because of those choices. At first, the player will be cautious until the Tan and possibly the Green Tribal Areas are conquered and all of those units are located in the various Cups. Then, they will ultimately have to throw caution to the wind and take some chances because they have a Victory Point threshold that must be met by the end of the current turn. If not met, the game will be lost and Agricola will be sent home in failure.

When I say throw caution to the wind, you must remember that keeping the Tribal Regions free of insurgent Tribal Units will provide VP’s at round’s end. If a Tribal Unit appears in a region that was previously conquered that VP from the region is at peril and the only way that it can be removed is if you have Legions nearby, which you most likely will not as they will be combined near the end to be able to face the Red Tribal Units and their amazingly powerful Leader Calgacus.

The other way to remove these stray Tribal Units that pop up like brush fires is to have a +3 Settlement in that Tribal Region as it will remove 1 Tribal Unit during the Housekeeping Phase before VP are scored. But back to this “throwing caution to the wind” statement and what I meant by it. As the game wears on, you will be continually be doing these Cup Adjustments and moving previously quelled and subdued Tribal Units into the Unfriendly Cup and finally to the Hostile Cup where they can be randomly drawn in response to a Hostile Tribe Reaction.

As you look at that Hostile Cup near the end, you will see Blue Units, Tan Units, Green Units and Red Units. You are really just a random draw away from having a Blue Unit popping up into Iceni, which for the whole game has been scoring you 1 VP each turn due to it being clear of Tribal Units. But, now the area is no longer clear. And oh wait, that Suppress Action you just took now has you perform two Hostile Tribe Reactions. You have to reach your sweaty hand into that cup, feel around nervously, all the while praying that you don’t draw that Blue Tribal Unit, or even that Tan Tribal Unit you just placed in the cup. What could be worse though is if you draw both the Blue and Tan Tribal Units and now you have lost two regions that won’t score because you don’t have a +3 Settlement in either of these regions and your nearest legions are engulfed in combat in Damnoni territory in the Red Region.

Oh the beautiful pain of your choices. You cannot be consequence free and a good ruler will know how best to deal with these situations and will plan for the worst! Until you don’t, because you couldn’t plan and it all unravels in a glorious shower of bad luck. But, such is the life of the Roman Consul tasked with suppressing the Britons. Good luck!

In Action Point 3, we will review the Roman Actions that can be taken to accomplish the subjugation of Roman Britain and the special Leader Actions that will add benefits to the player if the Agricola counter is located with the Legion performing the actions.

6 thoughts on “Agricola, Master of Britain from Hollandspiele – Action Point 2”