Just concluded Turn 2, Clement VII passed away, and much of the game was very cagey, and quite static. Part of that I felt was on me, because whilst I had a large hand in terms of number of cards, most of them were 1 or 2 value cards, so it was hard to conduct any major operations or build auxiliary forces. I cannot tell you how much I like the diplomacy phase. There’s nothing quite like opening the turn with a flood of messages from all sorts of emissaries asking about potential goals, cooperation and common enemies. As the Hapsburgs I made peace with the French, as fighting on too many fronts isn’t advisable, and we formed an alliance for me to loan the French a fleet. In theory this was to help the French against the English, but sadly that never materialized.

Below is a look at the overall picture of the state of the board at the end of Turn 2, the biggest change of which was Buda falling to the Ottomans, which is again, a fairly standard opening from them. 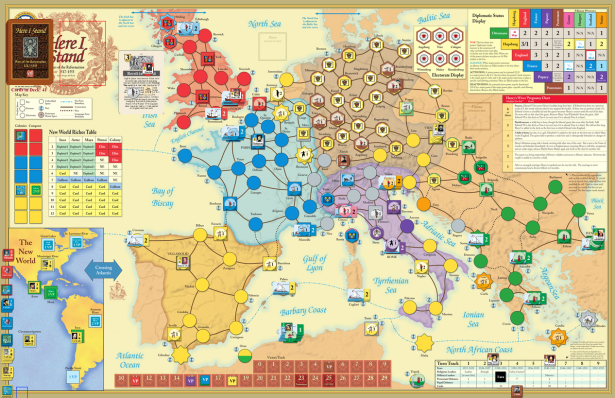 Somewhat concerning to all was the Reformation keeps chugging along very nicely for the Protestants, and the counter reformation seems to be very slow from the Papacy. At least the Schmalkaldic League wasn’t played. I’m hoping the Papacy can pull a finger out and get some of this religious fervor under control before that gets played, in order to reduce it’s long term impact. Not a big fan of having all the LOC’s blocked to the western front when that happens. 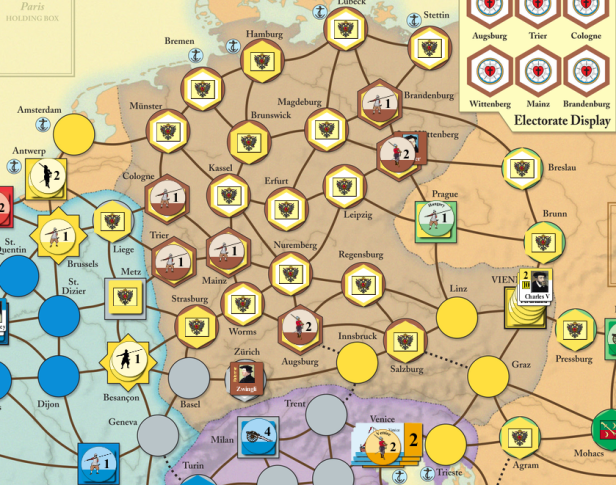 Territorially speaking the English did almost nothing. With a smaller hand size they were tied up in the Irish revolt, upon which they rolled horribly. They lost 3 regulars and the Irish lost 2, so they’ll have to recommit a large number of their precious CPs in order to get out of that war. What that does, is it means they’re a concern on the continent that the Hapsburg’s don’t have to worry about as much for at least another turn most likely.

Pirates gonna pirate. The blockade of Algiers was effective, in that the Ottoman player didn’t attempt a single piracy action, which was very pleasing. And that even with the Squadron from Gibraltar on loan to the French. With the collapse of Hungary I am now at war with the Ottomans and with my fleets back in turn 3 I think the time for an assault on Algiers might be coming. Ideally I’d like to wait for them to come out to sea to batter the fleet, and then take on a weakened Algerian port.

France activated Genoa as a Minor Ally, and then reinforced Milan. But they too were in something of a bind, so decided to focus more on the new world. They sent over a colonizing mission, and an exploratory mission to try and pick up some spoils and VPs. In something of a chastisement of inaction I played the Search of Cibola card to remove their voyage of exploration marker. Hopefully they don’t squander Loaned Imperial Naval squadrons in the future, when they could have been better used proactively against the Ottomans.

And finally the Ottomans. The Eastern front fell somewhat expectedly. I’m not sure if the Ottomans had the same problem that I did, where my cards were lower valued. I say that because he took Buda, and then there was something of a stalemate, as I was trying to run forces across Germany (very inefficiently I might add) to reinforce Vienna. Only now, after Winter do I feel more secure about the state of Vienna, at least they have a good fighting chance. One day I’ll get a helping hand from the Knights of St. John to hamper the Ottoman hand and I’ll really be able to lean on them and drive them back east.

So that’s basically where we’re at. From what I can glean the English have a diplomatic marriage which they’re hanging over the French head. This is keeping those two at bay, and whilst time ticks along the French are looking further afield for VPs. I’m hoping to keep them on my side, militarily speaking, for as long as possible to focus all my resources east. Once the Ottomans are crushed then the Europeans are free to tear each other apart.

Unironically this is one of the best games ever, however bad I am at it. I just love it so much. I could not recommend this game more to a large group. See you for turn 3 later!

If you wish to catch up on the series, you can read the previous posts here: