Wow! Okay. Just concluded Turn 3. And it feels like so much more has happened even though the board doesn’t necessarily show it. I felt like the first two turns we just had a lot of build up and increasing pressure (as well as the wildfire spread of Protestantism). But during Turn 3 the dead lock was broken by the Ottomans and we had our first major combats.

Below is an overall look at the game state, this is at the end of winter, and just before the diplomacy phase of Turn 4, so we’re currently trying to figure out how to take advantage of each other based on what is shown. 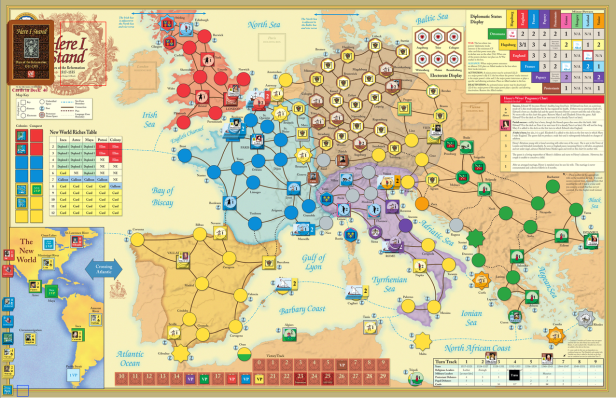 The English were able to commit to the Irish Revolt and in doing so picked up a War Winner VP, and freed them up to release troops back to the main land. An army won’t just sit there and do nothing, so I feel like they’re poised to spring deploy to Calais and then move on in to Germany and France. 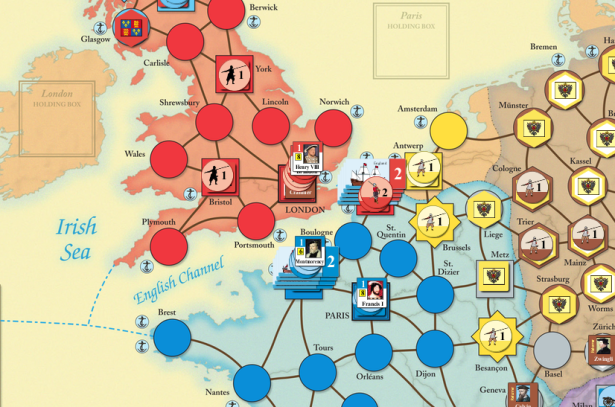 A big thing that happened is that Henry VIII remarried and rolled a sickly Prince Edward result on the Heir chart, and thus picked up 5 VP, so now they’re in major contention for winning. As such that threatening army stack is of major concern for a campaign down into Antwerp and on to Metz. I’ll have to try and convince the English to ally with me and to pincer France. I can attack from the east and south, and the English from the north. we’ll see if I can get them to bite. 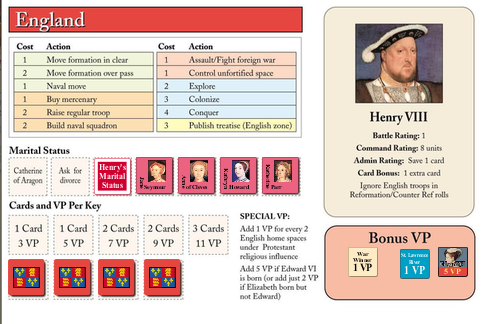 The Ottoman’s opened up the turn with a march into Vienna. I intercepted into Pressburg but was summarily beaten in the field battle very badly. The dice were unkind. I retreated to Vienna where again we had another battle and was heavily beaten and forced to retreat, giving up the capital. I was able to camper back to Prague with my tail between my legs to regroup to fight another day but the outlook at that point was entirely bleak. I’m not a very experienced player in Here I Stand, so I was a little worried I was about to totally biff it for everyone by playing terribly and getting steam rolled by the Turks.

I built a few more forces in Prague and bade my time. All the while the Reformation was chugging along swimmingly for the Protestants. Luckily enough the Schmalkaldic League wasn’t played, so I’m really hoping that the Papacy can affect some change before everything flips to Protestant political control. For the long game, that will just mean I have to commit that many more forces to crushing these Electorates and reestablishing LOC’s across Germany to support a western campaign against France. 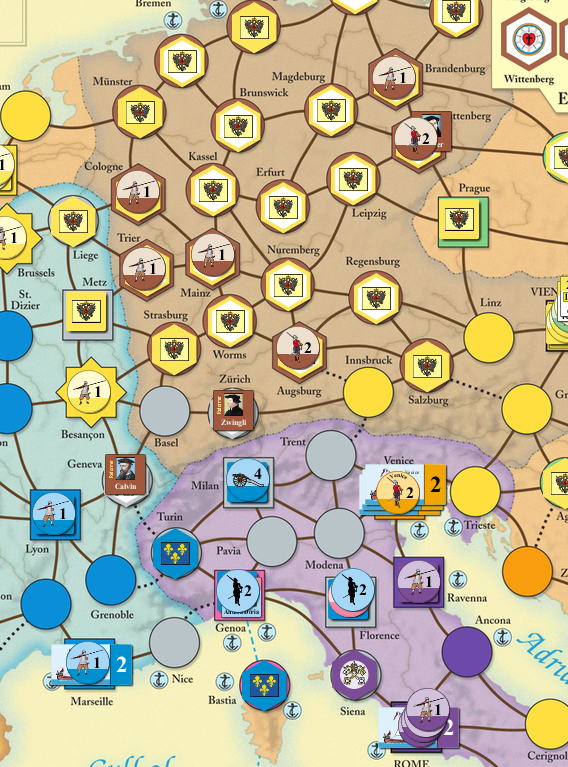 France had the Rogue Leader event and was charging around northern Italy taking Florence and trying to establish themselves as a major threat. A few patron of the arts, and master of Italy cards and we’ll all be in trouble with their creeping VP count. I did ally myself with the French this turn to get the use of the Genoese fleet and naval leader, and boy did I need them. I think I gave up a mercenary and a card, which was a steep price to pay for sure, but I think the ends justified the cost.

Above is the picture of the western Mediterranean. You might notice a distinct lack of pirate ships in Algiers, and that’s because, with the help of the Genoese fleet and Naval commander, I was able to wipe the entire Ottoman navy off the face of the planet. In my personal rage at being defeated at Vienna I threw all caution to the wind and tried to chase down the entire Ottoman fleet, which was stacked at Algiers. If I were to start getting pirated or have a big naval defeat I think the game would have become very precarious for all involved. 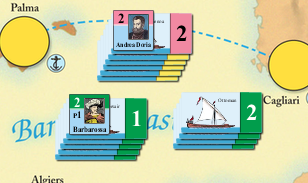 I spent 4 CP’s on naval moves chasing the Ottoman fleet around the Med, trying to jockey for position, as they kept slipping away, making three successive avoid battle attempts. I did not want to split my forces to bottle them up as we were almost dead evenly matched. During the next impulse I was able to catch them, and inflicted 7 hits to their 2. I effectively eliminated all their Naval squadrons, as those have to be removed before Corsairs, and I lost just one. They had to retreat to the Gulf of Lyon, where they were cornered and couldn’t escape where I inflicted a Coup de Gras, for the loss of of the loaned Genoese fleet. I had invested a lot of CP’s, for sure, but it was a total victory.

I was able to then bide my time until the Ottoman’s were effectively out of cards before I marched back to Vienna, for vengeance, and for glory. I walked in, as a terrible general would, on what was effectively a 50-50 gamble. I was holding the Treachery! card though, which I was intending to use to defeat the siege and capture the Sultan. But the field battle went favourably, and instead of withdrawing into Vienna they retreated back to Pressburg, and subsequently to Buda. 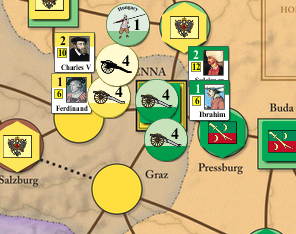 Whilst I didn’t get the ultimate prize of the leaders as captives, I regained my capital, sent the Ottomans home, liberated my capital, and had destroyed their fleet at sea, and capacity to commit piracy.  For me it was a very, very nervy turn that went from full blown meltdown and collapse, to exuberant victory! I still had that Treachery! card in my hand – which I used to send an explorer and a colony to the New World.

The New World went swimmingly, as both my explorer and my colony were successful. I’ve racked up some decent VPs from this, which will help to offset the lack of anything coming from the formation of Schmalkaldic League, which will happen next turn at some point.

So, all is looking very interesting. I have a 1 point VP lead as the Hapsburgs, so I know people are looking to gang up on me as the leader, and those stacks of French and English troops are a little disconcerting. But that’s what makes this game so fascinating. When the diplomacy phase is declared and the inboxes fill up, it’s always an exhilarating and tense feeling. How much do I give away, who do I treat with, how will others react? Does it even matter? Can I forge my own path to victory? I love this game.

To catch up on the series, you can read about Turn 1 and Turn 2 AAR’s.