Bleeding Kansas is a 2-player game that deals with the violence and politics of pre-statehood Kansas from 1854-1861. The game focuses on the tensions between pro-slave and abolitionist parties and their attempts to win over emigrants to Kansas to their cause and thereby influence the outcome of elections to move the state toward their leaning on the issue. The game has four elections that players will fight over trying to have the most influence in Kansas counties to score victory points.

The Election Track, which we briefly covered during our look at the Politics action, reflects the violence and political furor inherent with the slavery issue in the Kansas Territory. Each time a player takes a Skirmish, Burn or Politics action a Political or Violence marker is placed on the track. Players place their faction aligned markers on the track in the lowest numbered space. Once a marker is placed on an election space an election is triggered. 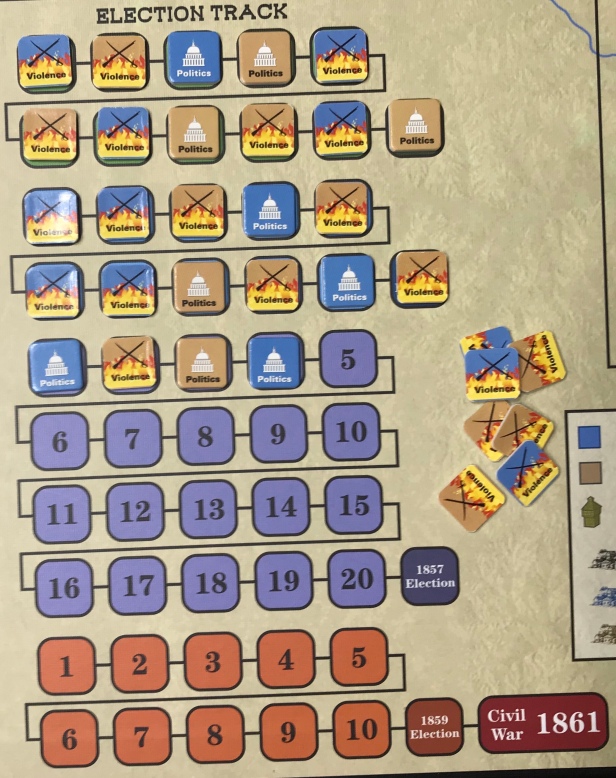 In the first Kansas election of 1854 voter fraud was rampant and the results were voided. For purposes of the game and to adhere to historical accuracy no counties are counted during the first election in the game and only the Election Track bonus is counted.

The main focus of the game is control of counties through placing or moving cubes of the player’s faction into the key 17 counties. This is the most important aspect of the game and players must be aware of their stance during each election. Using the Politics Markers to denote control of counties lends itself to easy identification of control and to a ready understanding of which faction is in the lead.

Once an election is triggered players will move to the Election County Count Procedure to determine who won that election.

There are 17 Kansas counties that matter to an election and which control over determines the winner of the election as well as the number of Victory Points will be awarded to the winner. The players are competing for control of these 17 counties containing important Kansas settlements of the time. The player with the control of the most counties will score victory points and whoever has the most VP at the end of the 1859 election will win the game. The game covers only four elections from the period including 1854, 1855, 1857 and 1859.

When an election is triggered players will simply count up the number of settlement counties that each controls. A settlement county is one in which a settlement is located such as at least one town, capital or fort.

Here are examples of the different type of settlement counties. First let’s take a look at a major county in Linn County. You will notice that Linn County contains several elements which qualify it as a settlement county. It contains two different towns which are both faction aligned. Mound City, colored blue, is aligned with the Anti-Slavery faction while Paris is brown and aligned with the Pro-Slavery faction. You will also notice that Linn County contains a fort in Westpoint. Notice that the number in the upper left hand corner of the county is circled. This is for easy identification as a settlement county. 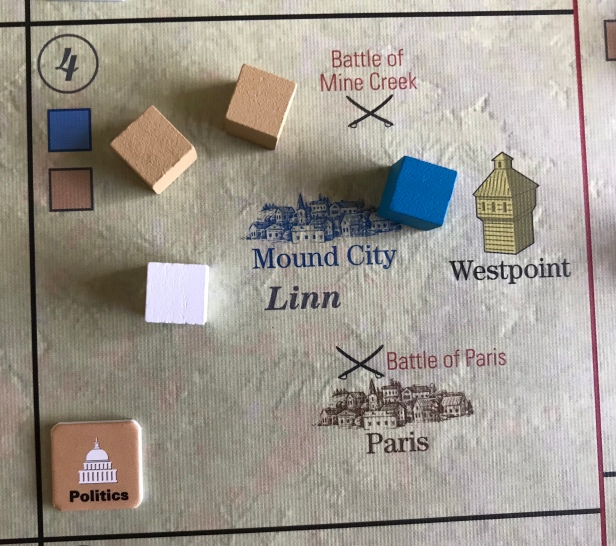 In the next picture we also see a settlement county in Bourbon County but that has no settlements in the form of towns or faction capitals. It does however contain a fort in Fort Scott which qualifies it as a settlement county. You will also notice the circled county number in the upper left hand corner.

Here is a look at Coffey County which contains a town that is not faction aligned. The town is black and qualifies the county as a settlement county. Once again notice the circled county number in the upper left hand corner. 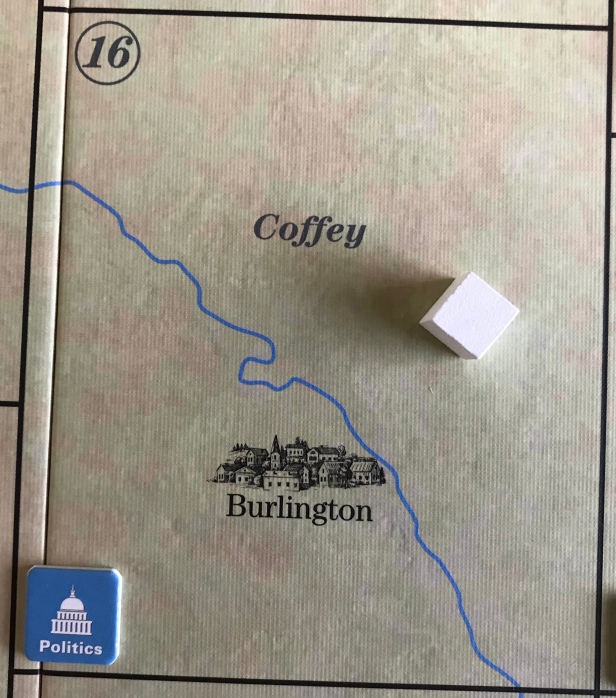 Finally let’s take a look at Wyandotte County which contains the Pro-Slavery capital located in Fairway. You will also see a fort located at Kansas City. These two elements qualify Wyandotte County as a settlement county. 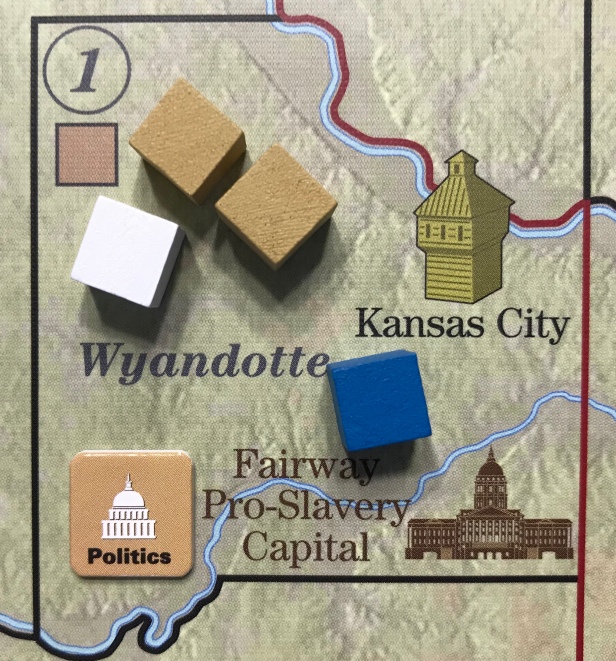 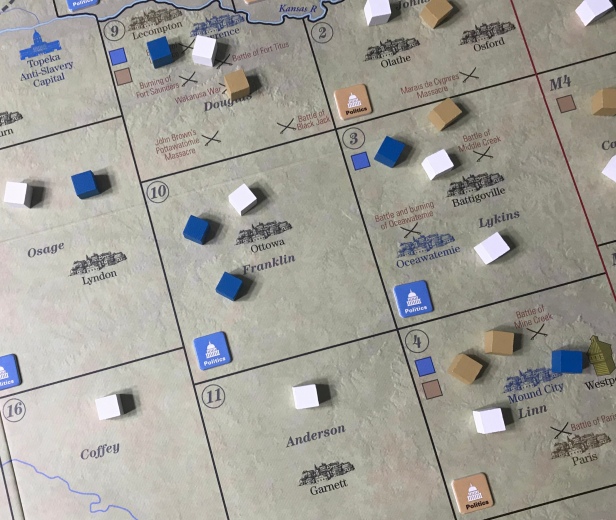 If neither player has faction points in a county or there are equal points players move to a tie-breaker and count each adjacent controlled Kansas county. In this case control of non-settlement counties counts. Counties that are diagonally adjacent do count towards tie-breaking. If the tie-breakers are equal, neither side wins the settlement county in question. Also counties absent any faction points and absent of influence from surrounding Kansas counties do not count.

Let’s look at a situation to illustrate this point. Anderson County located in the very center of the below picture is perfect example of this point. It is surrounded and adjacent to the following counties: Coffey, Franklin, Lykins, Linn, Bourbon, Allen and Woodson. Osage County is not adjacent to the northwest. Anderson County contains no faction cubes of either side and no faction aligned settlements but does contain a town and is thereby a settlement county. To determine who has control we will refer to the number of adjacent counties that are controlled by each faction. The Anti-Slavery (blue) faction controls Franklin, Lykins and Coffey (which is controlled by adjacency to Osage County). The Pro-Slavery faction controls Linn and Bourbon. This means that the Anti-Slavery faction controls Anderson County by 3-2. Pretty simple. 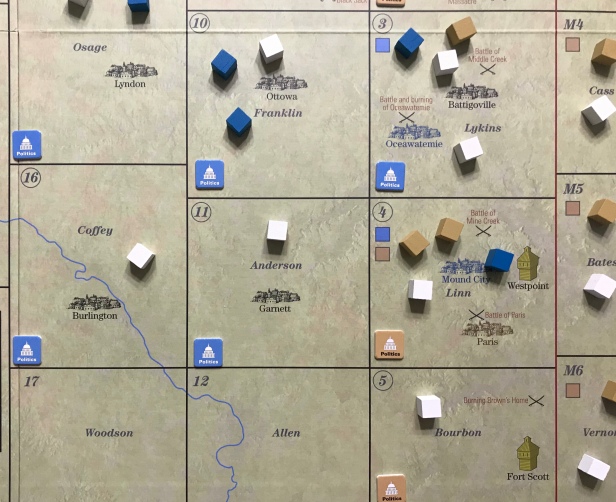 After county control has been determined among the 17 settlement counties, players will compare the number of counties they control. The player with the higher total subtracts the lower total and adds the difference to their VP total. For example, if the Pro-Slavery player controls 11 counties and the Anti-Slavery controls 6 counties the difference will be 5 and the Pro-Slavery player will add 5 VP’s to their total. If they then happened to have the most Political Markers or Violence Markers on the Election Track at the time the election was triggered, they will score the Election Track bonus 2 VP as well. Once again pretty simple.

But don’t let the game’s simplicity fool you. This is a knock down drag out bare knuckle fight for supremacy in the Kansas Territory and will test you’re meddle as you fight back and forth undoing what your opponent has just done. The game boils down to staying the course and playing your cards smartly to gain the upper hand in elections. You have to be able to judge where control stands as you play each card and you have to plan as scoring elections can really sneak up on you if you are not paying attention.

We really have enjoyed Bleeding Kansas and surprisingly both will be adding this one to our list of the best of 2019. I hope that my Action Points helped to paint a picture of this very interesting game and I hope that you will give it a try.

Here is a link to our video review of the game: https://theplayersaid.com/2020/01/05/video-review-bleeding-kansas-from-decision-games/