Bleeding Kansas is a 2-player game that deals with the violence and politics of pre-statehood Kansas from 1854-1861. The game focuses on the tensions between pro-slave and abolitionist parties and their attempts to win over emigrants to Kansas to their cause and thereby influence the outcome of elections to move the state toward their leaning on the issue. The game has four elections that players will fight over trying to have the most influence in Kansas counties to score victory points.

In Action Point 1 we looked at the makeup of the deck and also examined two of the more violent actions available to players in Burn and Skirmish. In Action Point 2, we looked at the Movement and Influence actions that players will need to use to build up a presence in Kansas counties ahead of elections. In this Action Point we will look at the Politics, Migration and Cooperation actions.

Of all of the available actions in the game this is the one that I would recommend that you don’t use often. It really should only be used to force an election to be held or to gain the majority in an election year. The really interesting thing is that you can also accomplish this very thing through the use of the Skirmish or Burn actions.

When playing a card containing a Politics symbol (capital building) the player places one of their faction aligned Political Markers on the lowest numbered available box on the Election Track. In the above picture the Pro-Slavery faction player plays the Lincoln-Douglas Debates card which contains a Politics symbol and will be able to place one of their Political Markers on the Election Track. The only open space is the 10 space which leaves just one more Political Marker or Violence Marker being placed to trigger an election.

After this action is taken you will notice that the Pro-Slavery player has a total of 6 Violence and Political Markers on the Election Track compared to only 4 for the Anti-Slavery faction. With only one more marker space available on the Election Track (the 1864 Election space) they have almost guaranteed that they will win the 1854 Election bonus which is 2 VPs. The only thing that could change this outcome is if the Anti-Slavery player has a Faction Star card with a Politics symbol and plays it to remove two of their opponents markers. 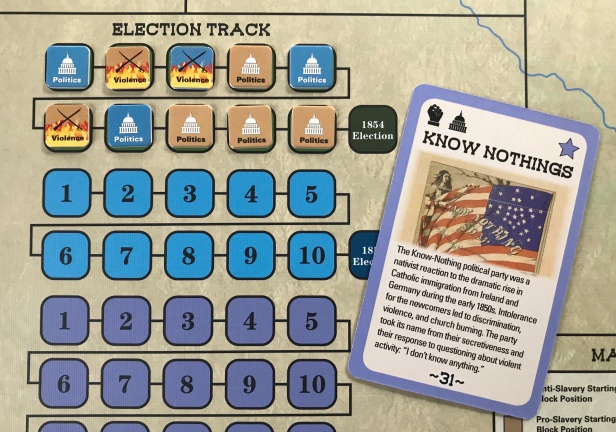 The Anti-Slavery player plays the Know Nothings Faction Star Card which allows them to take two actions either from one each of the symbols shown (Influence or Politics) or they can take two Politics actions or have a choice of the special action which will allow them to remove two of their opponent’s Political Markers from the Election Track.

Now let’s take a look at the Migration action.

In the game, white cubes represent the droves of pioneer settlers who moved to the area from the east coast. These Migrant cubes represent potential new recruits to the philosophies of both sides of the slavery issue and are seen as resources in the game.

The Migration action simply means that the player gets to move all Migrant cubes on the board one county to the west. The action starts in the highest numbered county which is 25 Dickinson County and the player simply moves any Migrant cubes there one county to the west. A county is defined as being further west if it’s western border is farther west than the county the Migrant cubes are exiting. If there is a game board edge on the western edge of the county (for example in county 16, 17 and 20) the cubes there may exit the board at the player’s discretion. After movement is completed counties are limited to a total of 5 Migrant cubes. Any excess over 5 cubes are simply removed to the supply.

Above is a picture as the action is being initiated. You will notice that there are 23 Migrant cubes on the board at the beginning of the game. 6 of the initial 23 are placed in Missouri counties and the remaining 17 are placed in each Kansas county that has one or more settlements, either a town or a faction capital. These counties are identified on the board with a circle around the county number.

Each of the Migrant cubes are moved one county to the west and the movement is important for the faction that played the card as there are two things they are attempting to accomplish. One is to move as many Migrant cubes into counties where they have their faction cubes and two is to keep as many Migrant cubes away from their opponent as possible. This action is very similar to the Movement action in that you are attempting to setup a future Influence action so that you can gain new cubes to then spread out and control counties ahead of elections.

Once the migration has moved all Migrant cubes on the board add one new Migrant cube to each of the 6 Missouri counties. These new cubes represent the continual westward movement of settlers.

In this picture you can see that the play of the Migration action can bring new cubes to your area of influence. Here the Anti-Slavery player has moved cubes into Lykins, Linn and Douglas Counties where they have a blue faction cube. This will allow them to attempt an Influence action on their next turn if they have the right card.

Another point about the Migration action that I want to highlight is that cubes can be exited from the board if the county they are moving from has their western boundary on the edge of the board and no possible county to move to such as with Clay, Dickinson and Woodson Counties. You can also optionally move cubes off the board even if they have a possible county on their western edge as long as they also have an edge that doesn’t have a county. Examples of these are Lyon and Coffey Counties.

In the picture above you will see that there are Migrant cubes located in Clay and Dickinson Counties on the edge of the board when the card Population Determined Statehood with a Migration symbol (covered wagon) is played. There are no counties on the board to the west so this is an example of when cubes will leave the board. 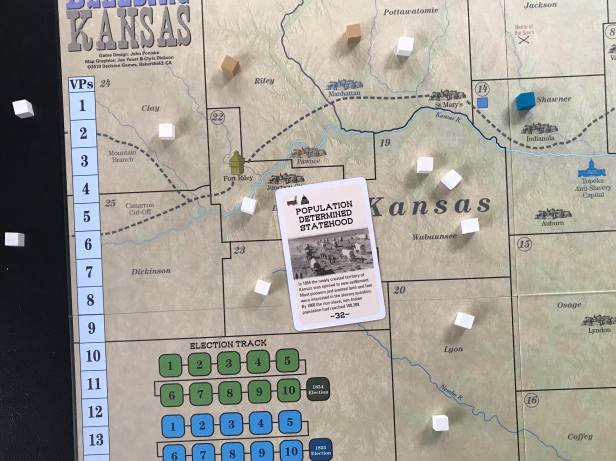 This means that these cubes will exit the map and will be returned to the supply. There are no other counties adjacent to the west where they can be moved to. Notice to in the picture the buildup of cubes in Waubaunsee County where there are no faction cubes to attempt an Influence action. It would be a good idea for one of the factions to move a faction cube there to attempt to gain new recruits so they can then spread out on the western Kansas counties to control the elections there.

When you play a Faction Star card with the Migration symbol you will get to move all Migrant cubes 1-2 adjacent counties, not necessarily to the west, and then after placing the 6 cubes in the Missouri counties you can add an additional two Migrant cubes anywhere. This action can be lead to an amazing buildup of cubes that can be influenced and will take some forethought and planning to properly pull off.

Let’s now move to the final action we will look at Cooperation.

This action is the one action that doesn’t seem to belong in a game about the fighting and violence inherent in this struggle. When playing a Cooperation symbol (hands shaking) the player has three distinct choices:

This action is seen as the rival factions making peace for a season while they repair damage or tend to the dead and wounded. It can also be really important to move the Federal Troops cube into a county where you feel your hold is tenuous as the presence of Troops will prevent the Play of Influence, Skirmish or Burn actions.

When playing a Faction Star card with the Cooperation symbol you can take two of the above mentioned three actions or can remove a Burn Marker from a county adjacent to a county that contains one of your faction points.

Normally the remove a Burn Marker action of Cooperation requires the presence of a faction Point but with the special Faction Star action you don’t need to meet that requirement. In the above picture you will notice a Burn Marker on the town of Mound City in Linn County. But there is not a faction point in that county to use to remove the Burn Marker. With the play of the Faction Star card James Montgomery the Anti-Slavery faction can use the blue faction cube in Lykins County to remove the marker. 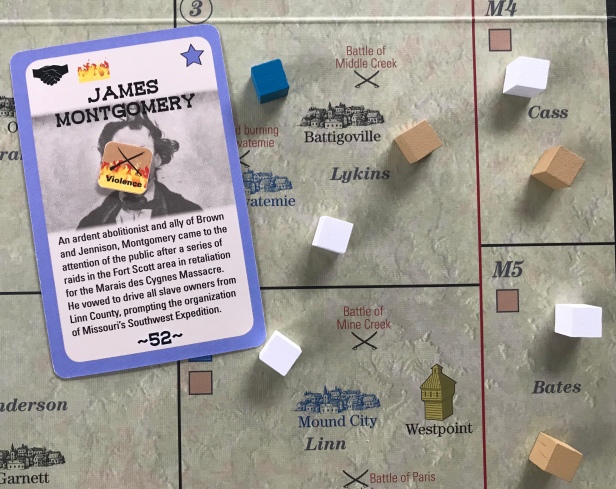 A subtle but important ability that you must be aware of as the battle for control will rage in counties prior to elections.

I hope you now have a good understanding of the 7 different actions available to players and how they can be used to your benefit. In our final Action Point we will take a look at the Election Track, cover the rules that govern an election and look closely at the Election County Count Procedure and how an election is decided.