I love historical themed games. And if they are set in World War II, even the better! Undaunted: Normandy is a tactical card based game that uses very interesting mechanics to simulate small platoons of soldiers from the 30th Infantry Division and their enemies the defending Germans. The game consists of 12 varying scenarios that tell the story of the 30th ID’s actions as it travels from Omaha Beach (they arrived a few days after D-Day) to Mortain, which was essentially the division’s conclusion to its actions in Normandy. Over those twelve scenarios, the 30th fights through bocage, participates in Operation Cobra, liberates Tessy-sur-Vire, and eventually defeats Germany’s counter-offensive in Mortain. The game uses deck building to force the action and move unit counters from tile to tile to gain an advantage, take cover from enemy fire and scout new locations as you position yourself to control the area.

You might be asking yourself what does deck building have to do with a World War II game? I would say everything as you must try to build your deck up with the best units for the job, take the initiative to get your soldiers moving on the battlefield first and then fight for control of objectives. The game is fast playing but has tactical depth as you must make critical decisions about how to manage your deck by adding and deleting cards from that deck to make it more efficient.

In this series of Action Points, we will take a look at the deck building aspect, including the makeup of the deck and how you “build” it, dive into the various unit types and their actions and special abilities, take a look at the modular board and how it works in the design and discuss strategies about how to defeat your opponent through offensive attacks as well as through stratagem.

Your deck is made up of various types of cards that each play a role in the game and represent your soldiers, leaders and the chaos and confusion of the battlefield. Each game, players will start with a certain number of cards already in their decks with other cards that are available in your personal supply to add to your deck.

There are three types of cards including Combat Cards, Command Cards and Fog of War Cards. Let’s take a quick look at each type.

Combat Cards represent each of the individual soldiers in your platoon and each of these cards has their own Combat Counter used to identify their location on the board and their current status, such as suppressed.

In the picture above you will see several numbers and letters on the card as well as the name of the soldier and it’s type (Rifleman). The number in the upper left corner is the Initiative value used to bid for Initiative each round while the numbers after the various actions inside a black circle denote how many spaces the unit can Move or Attack. The capitalized letter on the left side represents the unit’s Squad Designation. Finally, any special abilities will be listed on the bottom of the card such as Control, which is used to take Control of a tile on the board to gain Objective Points.

Command Cards represent the leaders of your platoon and include non-commissioned officers. Unlike the Combat Cards, these leaders do not have an individual counter used to represent them on the battlefield.

The Command Cards are laid out the same as a Combat Card but with a few extra elements. The stars around the actions on the bottom of the card denote that this is a Command Card. The Command Card’s actions effect cards associated with their squad (either A or B) and also have special actions that allow you to draw extra cards or pick up cards that have already been played.

Fog of War Cards are representative of the difficulties of command and control during the chaos of a battle. They cannot be used for any action during battle other than to bid for Initiative and simply take up space in your deck. When you draw a Fog of War Card you will simply have one less action that round.

How You “Build” Your Deck

First off, your starting deck is different for each scenario. You will find the makeup of the deck in the Starting Cards section pictured below. To “build” your starting deck take one copy of each card shown with the D symbol surrounded by a black circle. You will shuffle these cards into a facedown deck.

To assemble your supply, or the cards that are available to add to your deck, take one copy of each card per S in a white circle symbol shown on the table. Place those cards into a face up supply. All remaining cards not listed on the table will be removed from the game and returned to the box for use in another scenario. 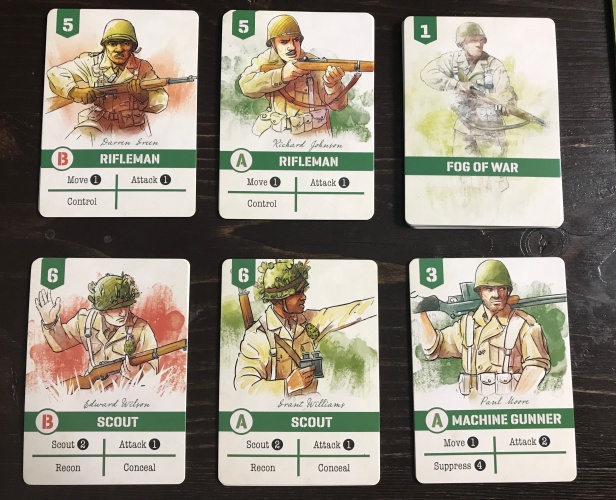 Now let’s take a quick look at the deck building aspect. Deck building really is at the heart of the design and is the engine that keeps the game moving. Over the course of the game, players will use their platoon’s Command Cards, including the Sergeant, Platoon Guide and Squad Leaders to bolster (a fancy term for adding cards from the supply to your deck) the units of the platoon that you want to focus on. The units include the Rifleman, Scout and Machine Gunners of each squad. 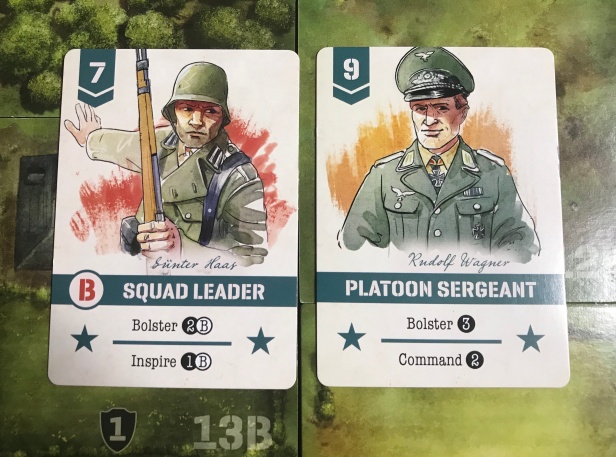 The more cards you add of a particular unit, the more effective and resilient it will be, meaning that the card will come up in your draws more often and allow you to use those units more. If you want to concentrate fire from a Machine Gunners team, then bolster all that Machine Gunners team’s cards into your deck so you’ll draw it more frequently. If you want to make a move for an Objective near your A Rifleman, then Bolster copies of that Rifleman into your deck.

The Bolster action is tied to a particular squad in the case of the Squad Leader meaning that he can only add cards from that squad into your deck. The Platoon Sergeant is different though and you can add any cards from your supply to your deck when you use his Bolster action.

The deck building element of this design is very well done and actually makes perfect thematic sense against the backdrop of a US or German Rifle platoon during World War II. A leader was asked to assemble the appropriate men and resources, deploy them properly on the battlefield, order them to move tactically to approach and capture objectives and call in reinforcements as his men were attacked, injured and killed. This sounds a lot like the deck building mechanic and I think it was a perfect choice for this light, fast playing and clever game.

In Action Point 2 we will take a look at the various unit types available and how their actions and special abilities benefit the squad in realizing their Objectives.

We posted an interview with David Thompson one of the designers for the game and it gives good insight into the design. You can read that interview here: https://theplayersaid.com/2019/09/16/interview-with-david-thompson-co-designer-of-undaunted-normandy-from-osprey-games/