In this series of Action Points we are taking a look inside The Age of Iron and Rust expansion for Time of Crisis from GMT Games. The game is a lite wargame focused on the Crisis of the Third Century AD in the Roman Empire and uses cards and deck-building to move the action along.

Mobile Vulgus is a Latin phrase that means “the fickle crowd”, referring to the changing nature, opinions and reactions of the general public or an audience, which is a derivation of the English word “mob”.  It literally denotes a movable public; or the unstable crowd and recognizes the inconstancy of popular taste and the ease with which clever politicians can influence the great mass of voters. In game terms, the support of the people can sometimes falter as easily as it can be encouraged.

As you know, Time of Crisis is a back and forth game that sees players pitted against each other for the control of provinces and ultimately a change in the player who wears the purple robes of Emperor and sits on the throne in Italia. This process is carried out as players play Populace cards to garner Influence points that are then used to Replace a sitting Governor. The problem with the process is the dice. Now, I know what you are saying. Typically, as long as you roll a 2+ on a d6 it is considered a success and garners you a vote but my luck dictates that I will roll multiple 1’s on a roll where you are looking for a number higher than 1. So, if you can somehow get the dice out of the equation, you are better off. Along comes the fantastically powerful card Mobile Vulgus. 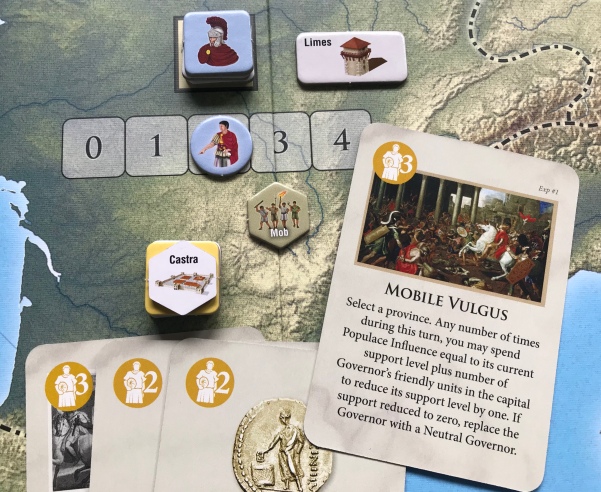 Why exactly do I consider this card so good? Well, you don’t have to rely on rolling dice to get what you want…simple as that. The power is maybe not as efficient as I would like it to be, as you will have to take a Replace Governor Action later to seat your Governor, but it is guaranteed. First off, the card allows you to target a province in which you wish to Replace the current sitting Governor. You normally would play Populace cards to create a number of Influence Points that you would then use to roll 1d6 per point. With Mobile Vulgus you simply play a certain amount of Populace cards to create a total amount of Influence that allows you to overcome their current support level. In the picture above, you can see that the current support level for the Blue Governor in Gallia is at 2. You will also notice though that the Blue General is located in the Provincial Capital with a sizeable army. This army will add to the number of Influence points you will have to spend to reduce that support.

As we examine the Blue General’s stack of forces, we see that he has 3 units under his control, 2 full strength Legions (XIV Gemina and X Gemina) as well as a lone Militia. These 3 units will add to the amount of Populace Influence points that must be spent to effect the support level of the province. Because there are 3 units, we will add those 3 units to the current support level of 2 to bring our target to reduce to 5. In simpler terms 2 for the current support level + 3 for the units in the provincial capital. This then successfully reduces the support level to 1. Remember, that if using a normal Replace Governor action, you would have been rolling 5 dice (1d6 per Populace Influence point spent) and would have needed to roll 2+ and garner 7 votes (calculated by doubling the current support level and then adding in +1 vote needed for each unit in the capital). You couldn’t have possibly done that using only the two cards shown and would have had to play at least one more Populace card with at least 2 Influence points to get to roll 7 dice!

But you aren’t done yet. Mobile Vulgus states that you can target a province “any number of times during this turn”. We still have work to do and luckily still have cards in hand that will provide the necessary Populace Influence points. As shown in the picture above, the play of 5 more Populace Influence points (when you only needed 4) allows you to reduce the support level by 1 thereby leading to the Blue Governor being replaced with a Neutral Governor.

So goes public opinion which can change as quickly and as often as the waves of the sea. I really like that this card was added as it has provided additional options to players as they attempt to wrest away control of provinces from their opponents and increase their reach across the Empire as they attempt to ascend the throne to take their rightful place.

In Roman law, ambitus was a crime of political corruption where a candidate would attempt to influence an election through bribery. That theme is present in the game as players can attempt to buy additional votes when they are trying to get their Governors elected. I love the attention they gave to history and I also really like that the picture they used for the card shows a Roman coin with an image of a voter casting a ballot.

Ambitus is a very useful card when you just need that one or two additional votes to unseat a Governor. As I’ve stated earlier, you will need to gain enough votes to overcome double the current level of support plus 1 additional vote for each unit located in the capital aligned with the current Governor. In our example picture below, that means that 7 votes are needed; 4 once you double the current support level of 2 and then there are three units located in the Green General’s stack.

As you can see the dice have been determined, rolling 5d6 needing to tally 7 votes. The dice are rolled and show four successful votes (rolls of 2+) and you will also see that a 6 has been rolled which means you will get to roll 1 additional d6. We do so and roll a 4 for an additional vote but the player is still two votes shy of success with only 5.

As you can see from the 3 cards played that there are two Ambitus cards included. This is allowed as you can play 1 Ambitus and gain its benefit for each point of Influence you have spent. So with the two Ambitus cards the player will garner two more votes as the text of the card reads “Add one to the number of votes you gain from rolling the dice”. This will bring the total votes to 7 which is the amount needed to unseat the Governor and replace with one of yours from the Available Leaders Box.

I really have enjoyed exploring the different advantages offered by the new cards in The Age of Iron and Rust expansion. We have only covered 5 of the 9 new cards in this series and there are even more that offer new strategies and tactics, so I need to get this one back to the table soon.

In our final entry in the series in Action Point 4, we will take a look at the new solitaire non-player faction rules and how it plays.

If you are interested, you can read our written review posted in September 2017 for Time of Crisis: The Roman Empire, 235-284 AD and our designer interview with Wray Ferrell and Brad Johnson for The Age of Iron and Rust expansion.

6 thoughts on “Time of Crisis: The Age of Iron and Rust Expansion from GMT Games – Action Point 3”