In this series of Action Points we are taking a look inside The Age of Iron and Rust expansion for Time of Crisis from GMT Games. The game is a lite wargame focused on the Crisis of the Third Century in the Roman Empire and uses cards and deck-building to move the action along.

In Action Point 1, we examined the tactical advantage provided by the Military card Spiculum. In this Action Point, we will take a look at two cards, the Senate card Triumph and the Populace card Demagogue.

I love the attention that the designers paid to the historical details of the Roman Empire and the background of the Triumph card is no different. A triumph is a ritualized public celebration to acknowledge the victory of a Roman commander. The victorious commander would be regaled in the toga picta, usually colored red as shown in the picture on the card, and would lead a procession of his army on a four wheeled chariot, leading captives taken in battle and any captured spoils of war through the streets of Rome to the temple of Jupiter on the Capitoline Hill where he would offer sacrifice and the tokens of his victory to the god Jupiter. Republican morality required that, despite these extraordinary honors, the general conduct himself with dignified humility, as a mortal citizen who triumphed on behalf of Rome’s Senate, people, and the gods. The Triumph card follows this celebration in its theme and application in the game.

In the last Action Point we covered an example of a battle to highlight the real advantage of the Spiculum card. Remember that battles only last one round and a winner is determined by the side that inflicts the most hits on the enemy while surviving. The winner is then awarded 2 Legacy or VP for the victory. If the victory was against Barbarian armies, the victor is also awarded one additional Legacy for each defeated Barbarian counter.

The advantage to the use of Triumph is that if you have just won a victory against a Barbarian army you can play the card to gain an additional Legacy for each Barbarian counter removed in the battle. So using the example shown in the picture below, if you played Triumph in this battle you would gain a grand total of 8 Legacy! (2 for the victory + 3 for the 3 removed Barbarian counters and + an additional 3 for the 3 removed Barbarian counters from the play of the event). Talk about a major jump in your Legacy! If you are near to several Barbarian armies and have a few of these Triumph cards in your deck you could easily gain a significant lead over your competing Emperors through a targeted campaign to defeat the invading Barbarians. I didn’t even mention that the Triumph card provides 4 Senate influence points that can be used to place your Governors or recruit new Governors to be placed in the future. A very nice card indeed and a good addition to a heavily Military focused strategy.

A demagogue or rabble-rouser is a leader who gains popularity in a democracy by exploiting prejudice and ignorance to arouse the common people against elites, whipping up the passions of the crowd and shutting down reasoned deliberation. Demagogues overturn established norms of political conduct, or promise or threaten to do so. Sound familiar?

Usually in deck-building games there is a card mill strategy where you attack the decks of your opponents to weaken their potential to hurt you by cancelling their just played card or causing them to discard cards hoping to make them get rid of their best monsters or spells before they can target you. While Time of Crisis uses deck-building to drive the game, and is not necessarily the sole element of the design, the mill rears it’s head as a strategy to defeat your opponents deck and become emperor. Just like a demagogue in real life, the Demagogue card whips up a frenzy against those who have power, makes the sweat and start to think about how to get rid of their low value cards, and tries to bring them down for their own gain and benefit. 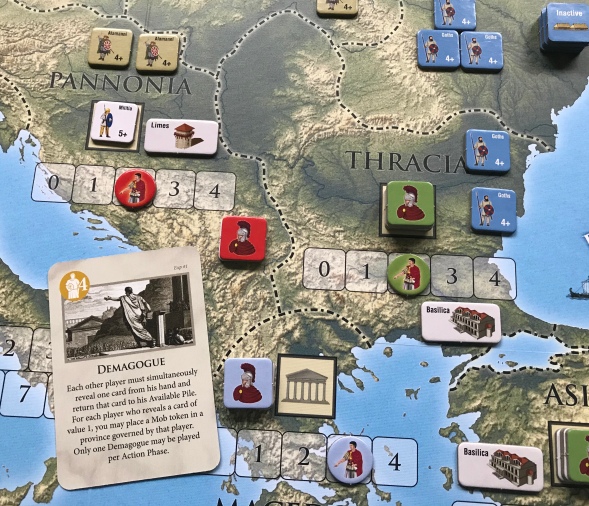 This works in a very interesting way in the game. When the Demagogue card is played, all other players have a choice. They must choose to show a single card of their choice from their hand of 5 cards that they will place on top of their deck. This means that they won’t lose the card but it will be unusable that round. If they choose to throw away a cheap 1 influence point card, they will be penalized. As you can see in the picture below, each of the targeted opponents chose to reveal and place on top of their decks 1 influence point cards.

If the opponents choose higher value cards to discard, this is where the effect of the event ends as they will simply lose access to those cards this round. But if they revealed a 1 value card, the player who played Demagogue gets to choose one of the provinces of each opponent who did so to place a Mob counter there.

Why is this a big deal? Well with only 1 such Mob counter it isn’t really a big deal but if it is not taken care of and removed that one Mob will rile up the residents of the province who will turn into 2 Mobs at the end of the round in any provinces with a Mob counter and no Amphitheater Improvement. As they continue to grow if they aren’t dealt with by either Disperse Mob (Military Action) or Hold Games (Populace Action), they will create even more problems and if the number of Mob counters ever equal or exceed the level of support in a province, the Governor will be removed from office and replaced with a Neutral Governor. The real benefit of the Demagogue card is not necessarily in the replacement of a Governor but simply in forcing your opponents to change their plans to deal with a problem they didn’t anticipate.

Also, as mentioned in my thoughts about the other cards, providing 4 influence points for use in Populace Actions is also very good as these 4 points can be used to increase Support Level in a province you govern (1-4 points to get to the next level), recruit a Militia unit to help in defending your Provincial Capital (2 points), Hold Games to remove a single Mob Counter (2 points) or Build an Improvement such as a Limes, Amphitheater or Basilica (3 points).

In Action Point 3, we will take a look at two Populace cards, Ambitus and Mobile Vulgus.

If you are interested, you can read our written review posted in September 2017 for Time of Crisis: The Roman Empire, 235-284 AD and our designer interview with Wray Ferrell and Brad Johnson for The Age of Iron and Rust expansion.

4 thoughts on “Time of Crisis: The Age of Iron and Rust Expansion from GMT Games – Action Point 2”