With the turning of the calendar come end of year lists….that is about all I see on Twitter right now. Best Games of 2016, Flops of 2016, Best Kickstarters of 2016, rinse and repeat. I do enjoy reading those lists though and will most likely be doing several of my own over the next month or so but I want to look forward with this post, not simply rehash the past.

We love lists. They help us to keep organized, keep us productive and most importantly tell us what is important! With this list, I would like to share 7 hotly anticipated wargames that are set to debut in 2017. Please keep in mind that these are wargames that I am interested in and anticipate and may not line up with your concept of what a wargame is or more importantly what your individual tastes are. I do appreciate feedback though so please make sure you share your most anticipated games in the comments below as I would love to see what you are into as it might give me some new games to keep an eye on.

One of the most successful games of 2016 was GMT Games’ Falling Sky: The Gallic Revolt Against Caesar. This game was Volume VI in the very successful COIN Series of games and was the series’ first foray into antiquity. With its success designers Andrew and Volko Ruhnke are back with a prequel expansion to the base game. Ariovistus: A Falling Sky Expansion takes us back to 58 BC with Caesar’s first entry into Gaul and his clash with the Suebian Leader Ariovistus. The game now allows one of the players to control the barbaric Germanic Tribes (Suebi) as a playable faction and offers new strategy and events for the other players to deal with while using the familiar Roman, Aedui and Belgic factions from the base game. The game also updates some of the components and events. Nothing has been firmly announced but I would guess the game will be released near the end of 2017. For better insight into the game, read our interview with Volko Ruhnke regarding the expansion. If you would like to order Ariovistus, follow this link to the P500 page: http://www.gmtgames.com/p-603-ariovistus-a-falling-sky-expansion.aspx

One of the more talked about games to come out in 2017 is Colonial Twilight: The French-Aglerian War, 1954-62 from GMT Games designed by Brian Train. Volume VII in the COIN Series takes the system in a little bit different direction by creating a 1-2 player experience. Yes you read that right, the players will control 1 of 2 factions (The Government or the Front de Liberation Nationale) with a unique and redesigned Initiative Track. This redesigned Initiative Track is very functional and retains the gamesmanship that so many players enjoyed from the other COIN Series games. I am very interested in this 2 player game as it will be somewhat like an adventure. At this point, the game is anticipated to release in the 2nd Quarter of 2017.

For better insight into the game, read our three part interview series with Brian Train. Part I, Part II and Part III. Brian is one of my favorite designers and is always willing to talk to me about his great games, and he gives such great insight in his lengthy and detailed responses to my questions. If you would like to order Colonial Twilight: The French-Aglerian War, 1954-62, follow this link to the P500 page: https://www.gmtgames.com/p-548-colonial-twilight-the-french-algerian-war-1954-62.aspx

I have long been on the lookout for some good Pacific Theater of Operations WWII games to add to my collection. I have played several of the big ones, including Empire of the Sun by Mark Herman, but do not own many PTO games (I do own D-Day at Tarawa by Decision Games). So when I saw the announcement for the release of Saipan The Bloody Rock from Compass Games, I immediately became very interested in the game, both for its mechanics and the setting. The game is Volume One in The Marianas Campaign, which is a planned series of major campaigns in the PTO of WWII. The game focuses on the decision to invade the Mariana Islands, starting with Saipan in June 1944, which was the most direct route to the Japanese home islands and from which B-29 Bombers were in range to bomb Tokyo. The game will utilize designer Adam Starkweather’s Company Scale System (CSS) and has 2 maps. The game has 4 scenarios and 2 campaign games and will allow players to experience a full-on naval invasion utilizing Amtracs and DUKWs to advance on the entrenched and dug-in Japanese Imperial forces. The game is truly a sandbox style game and each player is allowed to decide how to invade the island and how to best defend. You can play and then compare your result to history.

If you would like to pre-order Saipan The Bloody Rock from Compass Games follow this link to the product page: http://www.compassgames.com/preorders/saipan-the-bloody-rock.html

I absolutely love the World War II era and have played several of the classic games from GMT like Chad Jensen’s Combat Commander: Europe and Combat Commander: Mediterranean. But I have never really played a true operational battalion level game. I have longed to own Ardennes ’44 and Normandy ’44 but it is hard to find affordable copies. But once I saw Holland ’44: Operation Market-Garden offered on P500 in August, I immediately ordered the game as I have always been fascinated by Holland in World War II and Operation Market-Garden.  I absolutely love the classic 1977 movie “A Bridge Too Far” and seeing Sir Anthony Hopkins as Lt. Colonel Frost, Gene Hackman as Major General Stanislaw Sosabowski and James Caan as Staff Sergeant Eddie Dohun cemented in my mind’s eye the fantastic conflict that unfolded with the launch of Operation Market-Garden in the Dutch towns of Eindhoven, Nijmegen and Arnhem. And once I saw that the game is designed by Mark Simonitch helped me to feel comfortable as I own and love The US Civil War. This battalion level WWII game is made for 2 players and depicts one of the more crucial failures for the Allies in World War II with a combined ground and airborne attack.  The Allies must rush their ground forces forward to relieve their beleaguered Airborne forces who are desperately trying to capture one of several bridges across the Rhine River. Holland ’44 uses a system similar to Ardennes ’44 with a simple move and fight, I-Go-You-Go. At this point, the game is expected to release in the 2nd half of 2017. I cannot wait!

For better insight into the game, read our interview with Mark Simonitch. If you would like to order Holland ’44, follow this link to the P500 page: http://www.gmtgames.com/p-600-holland-44-operation-market-garden.aspx

I am not a huge fan of solitaire only games, unless they are well made, easy to learn and quick to play. I need interaction in my wargaming. So, when news broke of the release of Sherman Leader by Dan Verssen Games, I was immediately on board with the game. I have heard from my gaming friends that DVG’s other solitaire games such as Phantom Leader are well made, amazing experiences to play, and most importantly, quick!

In Sherman Leader, a follow up game to Tiger Leader, you are in charge of an American group of tanks, armored cars, trucks, half tracks, and infantry squads. You get to choose your campaign which includes anything from 1942 North Africa to 1945 Berlin, and everything in between. Of course, the game also offers the D-Day and Italian Campaigns as these were some of the more important battles in this history of the war!

Each of the campaigns takes only 30 minutes to set-up, and each battle can be resolved in 15 to 30 minutes. Remember, I said it was a fast playing game!  My favorite part about the “Leader” series is that you get to select your crew members that have differing skill levels, including Recruit, Green, Average, Skilled, Veteran and Ace. These crew members can earn experience points to be used to increase their skill level for each campaign that they participate in but also will accumulate battle stress, which will degrade their performance in missions.

Currently, Sherman Leader is on Kickstarter and has about 10 days left but is already funded with $68,000+ from 628 backers. If you are interested, here is the link to the Kickstarter page: http://fb.me/ZPzu4y49

This game is the 2nd volume in the “Great Statesman Series” from designer Mark Herman and GMT Games, the first volume being the critically acclaimed and award winning game Churchill: Big Three Struggle for Peace. In Pericles: The Peleponnesian Wars 460-400 BC, more of a wargame than its predecessor, up to 4 players are in control of either Athenian factions (Aristocrats or Demagogues) or Spartan (House Agiad or House Eurypontid) where they try to outmaneuver each other through political machinations and outright warfare to see who will dominate the regions of 5th century BC Greece. The game is a proponent of the thought that war is an extension of politics through other means and uses the conference table mechanic found in Churchill to debate issues regarding various theaters of war. Playtesters have described this Issue Queue preplanning mechanic as “insanely fun” and I am eagerly interested in playing this game as I absolutely love Churchill for many reasons, but the conference table is the game. The game is expected to release in March 2017.

For greater insight into the game, read our interview with designer Mark Herman. If you would like to order Pericles, follow this link to the P500 page: http://www.gmtgames.com/p-587-pericles-the-peloponnesian-wars-460-400-bc.aspx

1. Pendragon: The Fall of Roman Britain by GMT Games 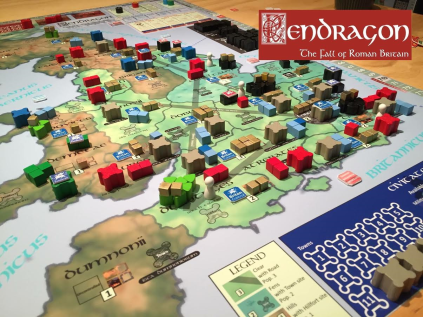 And finally, to my #1 most anticipated wargame of 2017, we come to Pendragon: The Fall of Roman Britain. GMT’s second foray into the age of antiquity in the COIN Series takes us to the 4th and 5th century AD to witness the struggle for control of Roman Britain between the Romans (Dux) and the various tribes including the Civitates, Saxons and the Scotti. But wait, this game is not about counterinsurgency! What? You thought that was what COIN stood for? In this version of the COIN Series, the struggle is not necessarily about counterinsurgency per se, but does focus on the assymetrical clashes between and among the Romano-British authorities and various Barbarian powers wanting to carve off a piece of the dying Roman carcass. I am very excited to see how this shift in the focus of the system works and from all accounts, as well as from my interview with designer Marc Gouyon-Rety, the game is amazing, stands true to its COIN roots but blazes a new path that is sure to be followed by others with its eminent success!

For greater insight into the game, read our 3 part interview with Marc Gouyon-Rety here: Part I, Part II and Part III. If you would like to order Pendragon, follow this link to the P500 page: http://www.gmtgames.com/p-572-pendragon-the-fall-of-roman-britain.aspx

Well, I could have probably added about a dozen other games to this list (including Hitler’s Reich and Cataclysm by GMT Games, ’65: Squad Level Combat in the Jungles of Vietnam by Flying Pig Games, Band of Brothers: Old Breed South Pacific from Worthington Publishing, etc.) but decided to keep it short and succinct at 7 games. If you agree or disagree, please share your thoughts with us as we love to hear from our readers.