Old School Tactical from Flying Pig Games is a tactical combat system that focuses on World War II to date. The game focused on the simulation of small unit combined arms engagements where historical units, weapons, armor and vehicles will duke it out on a beautifully crafted board full of hexes. During a turn, players will go back and forth using an Impulse Point System to activate units to either Move, Assault Move or Fire. The players will play through a predetermined amount of rounds and at the end, victory points and casualty points will determine which side is the victor.

In this series of Action Points we will NOT be touching on the base rules of the game but you can learn about the Impulse Point Activation System by reading our review on OST Volume 1 here: https://theplayersaid.com/2017/01/25/what-does-old-school-mean-a-review-of-old-school-tactical-vol-1-from-flying-pig-games/

I also wrote a series of Action Points covering OST Volume 2 and the Airborne Expansion that you can read to get more information on that amazing addition to the series.

Action Point 2 – take a look at the Impulse Point System that drives the action in the game as well as some of the more interesting aspects of the Old School Tactical: Airborne Expansion and the Airborne Units and Aircraft Loadouts, Flight Paths and Paradrops.

In Action Point 1, we examined some of the new terrain, weapons and  vehicles presented that are unique to the Pacific Theater of combat. In Action Point 2, we took a look at the new playable faction the Japanese, examining their new units including the Tank Killer and Sapper, and dove into the very powerful Banzai Attack. In Action Point 3, we looked at the United States Marines and what makes them some of the most elite fighting men of the war. In this Action Point, which is the final entry in the series, we will take a look inside the Hell Bent Expansion and talk about the different scenarios offered. 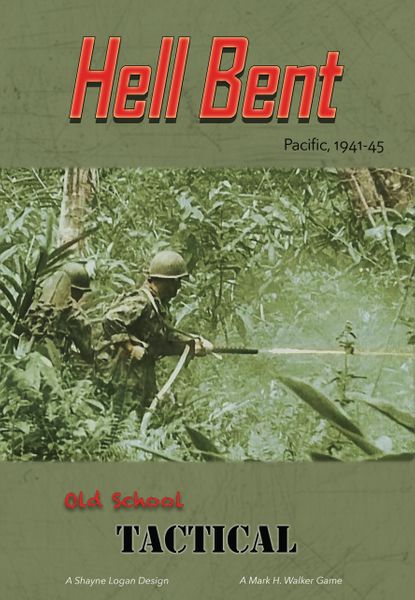 The Hell Bent Expansion is a boxed product for Old School Tactical Volume 3: Pacific 1942/1945 that was a part of the original Kickstarter campaign. In their past few campaigns they have done this and I think it works well. If you want more product, you can order the expansion but if the base game is good enough for you then you just get the base. So what does this Hell Bent Expansion offer to the OST fan? First off, the expansion offers 14 additional scenarios to add to the original 16 so you will have a whopping 30 scenarios. That is a lot! We have only played 4 so we have lots of gaming ahead of us.

Included in the Hell Bent Expansion are scenarios for the following historic battles:

I wanted to give you a quick photo preview of several of the scenarios and their setups.

The first scenario that we will take a closer look at is Scenario 1: No Hope But Glory, December 23, 1941 Wake Island. Shortly after Pearl Harbor, the Japanese offensive in the Pacific continued with a strike on the American outpost on Wake Island.

The scenario is an 8 Turn affair and as you can see from the setup at the beginning of the scenario that the Americans are outnumbered but not outgunned. The Marines only have 4 defenders with 2 Leaders but do have a Heavy Machine Gun and a Medium Machine Gun as well as a BAR and Satchel Charge. They also have some good fortifications at their disposal in a Bunker, Foxholes and Wire. The invading Japanese have 10 Special Naval Landing Force units along with 4 Sappers and a Sniper along with 4 Leaders. They have numbers while the Marines have firepower and this one is a very well balanced scenario.

The Japanese have 3D6 Impulse Points as compared to the Americans who only have 1D6 +5. Generally, with more units the Japanese would be expected to have more actions.

As you can see in the picture below, the Marines are setup in the middle with the two control points located in the back of their defensive line with a Bunker and Foxhole setup so that they can fall back to and make a last stand. They have used the Wire counters to place in the middle of the map and have those approaches covered with a Heavy Machine Gun with the flanks defended by their other heavy weapons as the Japanese come off the beach.

In the picture below, you can see the initial Japanese setup as they have placed their best units the Sappers on the Marines left flank while covering their advance with a Sniper unit that will move up to offer cover fire.

Their Light Machine Guns are being carried by SNLF units in the center to bring a steady rate of heavy fire on the protected Marines who are using the Palm Debris and Palms  Terrain to their advantage.

Finally, as you can see in the picture below, this is a long way to move to reach the objectives in the back of the play area for the Japanese. They will have to advance quickly and try to take the center in the first 3-4 rounds so they can put consistent pressure on the Marines that will have fallen back and are defending the objectives. 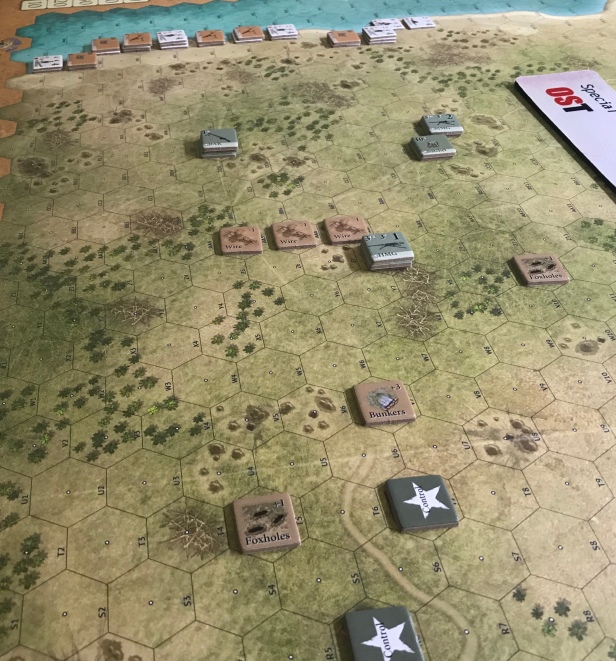 The next scenario that will take a look at is Scenario 12: Fools Rush In, April 9, 1945 Okinawa. In supporting attacks of the 27th Infantry Division, the tanks of the 193rd Tank Battalion found themselves isolated. They then ran into a Japanese Ambush by the Japanese 22nd Independent Anti-Tank Battalion. This one has a lot of interesting elements included as the Japanese units all have the smoke ability and have some hidden mines laid throughout the map that can be hit as the tanks move through and have some hidden Anti-Tank units and Tank Killers. The Americans have to exit 2 tanks off the west map edge and the Japanese simply have to stop them from exiting.

The scenario is a 7 turn affair and the action is pretty hot and heavy as the tanks try to move into the fray to reach the west edge of the map but they will have to watch out for the 3 hidden mines and then the hidden Tank Killer units as the Japanese player writes their location down and can ambush the tanks as they get near. The Japanese have 5 Rifle units, 1 Sapper, 2 Type 1 ATG (hidden), 4 Tank Killer units (hidden) and 4 Leaders along with 2 Light Machine Guns and 3 Satchel Charges which are just perfect to penetrate that American armor.

The American tanks are isolated and are really susceptible to attack as they have no infantry support. There are 5 M4A2 Sherman Tanks with an M4 Zippo and an Armor Leader but that is all that they have. This scenario is really tough for the Americans as they have to run the gauntlet and get 2 units off the west end of the map.

As you can see below, the Japanese have lined their Mines up front in the only two approaches and are sure to score at least one hit on the tanks. They do have their hidden Tank Killer and ATG about 3-5 hexes away from the Mines so that they can either Banzai to attack in force or charge out as the Tanks get near using their Satchel Charges and or self sacrificing the Tank Killers.

They have also set up a their available Trench fortifications near the back of the map as a last line of defense before the tanks can exit off the map.

In the picture below, you can see that the Americans decided to split their forces, probably not the best decision, and run the M4 Zippo up the middle supported by two attack approaches on the left and right wing in a hope to break the Japanese line and then sprint off the map. You will also see the Mines placed in the middle of the American approaches.

This one was really exciting to play and was very fascinating with the hidden units and Mines. In fact, Alexander moved his American Tanks into one of my hidden Mines early on and took damage to his main gain and was only able to use his Machine Guns. This set the tone for the scenario and the Japanese used their smoke ability to move up and attack the tanks ruthlessly. They didn’t even stand a chance!

There are also several scenarios that are big and contain a lot of units on both sides and feels more like an operational game on the tactical level. I like these type of scenarios as they are more involved, take a lot longer and offer more opportunity to take some risks and push your luck.

Overall, the Hell Bent Expansion is a must have in my opinion as it brings more scenarios (as if 16 already wasn’t enough) and more units with an entire counter sheet and a new map. This expansion just seemed to make the game whole and really take it to the next level and I liked it a lot.

I also really enjoy the differences between the Japanese units and their Elite opponents the United States Marine Corps. I have been waiting for this volume for a while now and I was not disappointed. I hope that you have got a good idea for this new volume and what it adds to the game from this series. I enjoy tactical wargames and the closeup and personal nature of the combat and operations always is very exciting. Volume 3 added lots of this and I think the system is better and more exciting for it!