Old School Tactical from Flying Pig Games is a tactical combat system that focuses on World War II to date. The game focused on the simulation of small unit combined arms engagements where historical units, weapons, armor and vehicles will duke it out on a beautifully crafted board full of hexes. During a turn, players will go back and forth using an Impulse Point System to activate units to either Move, Assault Move or Fire. The players will play through a predetermined amount of rounds and at the end, victory points and casualty points will determine which side is the victor.

In this series of Action Points we will NOT be touching on the base rules of the game but you can learn about the Impulse Point Activation System by reading our review on OST Volume 1 here: https://theplayersaid.com/2017/01/25/what-does-old-school-mean-a-review-of-old-school-tactical-vol-1-from-flying-pig-games/

I also wrote a series of Action Points covering OST Volume 2 and the Airborne Expansion that you can read to get more information on that amazing addition to the series.

Action Point 2 – take a look at the Impulse Point System that drives the action in the game as well as some of the more interesting aspects of the Old School Tactical: Airborne Expansion and the Airborne Units and Aircraft Loadouts, Flight Paths and Paradrops.

In Action Point 1, we examined some of the new terrain, weapons and  vehicles presented that are unique to the Pacific Theater of combat. In Action Point 2, we took a look at the new playable faction the Japanese, examining their new units including the Tank Killer and Sapper, and dove into the very powerful Banzai Attack. In this Action Point, we will take a look at the United States Marines and what makes them some of the most elite fighting men of the war.

We all know the mystique associated with the United States Marine Corps. Called Devil Dogs (earned during World War I in Belleau Wood), First to Fight, Leather Neck, Jar Head (this one was influenced by the look of their cover) among others. My favorite though is courtesy of a fictitious Space Marine from the movie Aliens Sergeant Apone who called them ultimate badasses! We know their reputation and now get to play them in a very cool and approachable tactical game covering the Pacific Theater of World War II. The purpose of this post is to take a look at the Unit statistics for the Marines and compare them to their compatriot Army Rifle Unit as well as stack them up against their enemy the Japanese and their special elite forces.

First, let’s take a look at the Marines as compared to their Army counterparts.

As you can see in the picture below, the Marines have a lot in common with the Army Rifle Unit. The only real difference is that the Marines have a 5 Firepower while the Rifle has just a 4 Firepower. I know that this doesn’t seem like much but does represent a 20% increase in Firepower for the Marines and does make a difference when going up against the Japanese during a Fire Attack. The Marines and Rifles have the same range (6), the same Defense Value (4) and same Movement (4) so they really are nearly identical from a statistics standpoint. 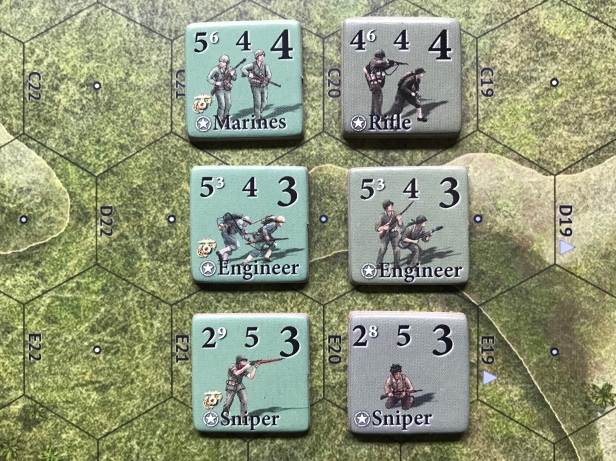 The real difference in comparing the Units is not found on the counter but can be readily seen on the Unit Card. The Marines are considered Elite Units in the game, which means they gain certain advantages in several areas. First, they gain a +1 Firepower while in Melee. This means that a Marine brings a whopping 6 Firepower to the fight. You stack up a couple of Marines with a good Leader and they will have the advantage every time in close combat. Second, they gain a +1 Rally when attempting to remove a Shaken or Broken condition. To Rally a Shaken unit, a 7 or higher must be rolled on 2D6 and to Rally a Broken unit, a 9 or higher must be rolled on 2D6. With this +1 benefit, the Marine only has to roll a 6+ to remove a Shaken condition and an 8+ to remove Broken. This is a huge benefit and over the course of the game will result in your Units staying in the fight versus being removed and placed in the dead pile.

Now that you see the advantages of the Marines, let’s take a look at their Leaders as compared to the Army Leaders. In the picture below, you will quickly notice that the Marine Leaders are superior in their ability to provide orders to their subordinate Units.

Remember that Leaders do not have a Firepower value listed on their counters. Instead, they have a number in a circle referred to as their Command Range. This Command Range allows the Leader to provide to other Units located within it a +1 modifier on Rally and Spot rolls, which is fairly significant. Leaders also do add Firepower and Defense during Melee but it is only a 1 for both of these statistics. They do however add to Attack rolls if they are attached to a Unit, giving a +1 to hit to the attached Unit or as part of a Fire Group and also provide a +1 bonus in Melee to that attached Unit.

As you can see, each level of Leader for a Marine is one step higher than their similar counterparts in the Army. An Army Captain has a 3 Command Range while a Marine Captain has a 4, an Army Lieutenant has a 2 Command Range while a Marine Lieutenant has a 3, etc. One other significant difference is that Marine Leaders can command Army Units but Army Leaders cannot command Marines.

The Marine Sniper is only the slightest bit different from the Army Sniper, but it is in a fairly significant way. The same as normal Marines, the Sniper is an Elite unit and gains the Rally and Melee bonuses (although I have no idea why a Sniper would ever run into close combat?!). Their real difference though is in the area of Range. Range is listed on counters as a superscript number in white font to the right of the Firepower value. As you can see, the Marine Sniper has a Range of 9 as compared to a Range of 8 for the Army Sniper. This means that they are deadly a full hex further and this makes a big difference in keeping them out of the fight while making an impact on combat by targeting the enemy’s Leaders and most powerful units.

The Japanese do not have any Units in their OOB that really even compare with the Marines. The Special Naval Landing Force Units are comparable in Defense and Movement but their Firepower of 3 is a full 2 points lower than the Marines 5 Firepower. The Sappers are probably the overall best Unit for the Japanese with a 6 Firepower (which is better than the Marines) but with only a 3 Defense and 3 Movement. Remember though that the Japanese have no Gut Check value and will not become Shaken or Broken in combat so this is definitely worth a +1 or +2 in Fire Attacks over the course of a game. All of the Japanese Units in Melee receive a +1 die roll modifier. This can make a huge difference on how effective they are in Melee and is a condition due to their training in close combat and their penchant for Banzai charges. 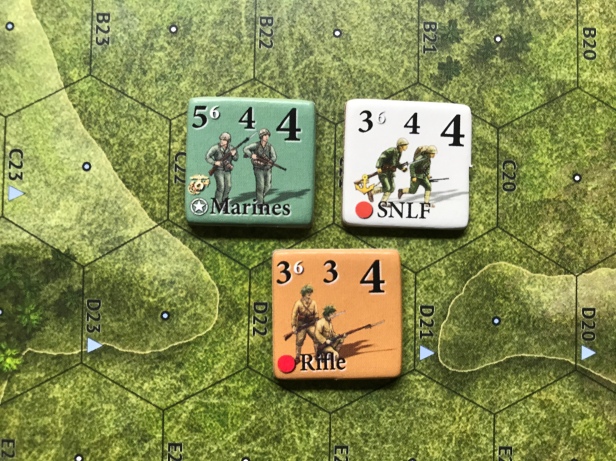 The Marine Leaders and the Japanese Leaders are identical across all of the different types, including Captains, Lieutenants and Sergeants, with the same Command Range, Defense and Movement values. This same level comparison is indicative of the similar levels of zeal and fanaticism that the Japanese operated with as well as the pride and focus of the Marines.

After playing a few scenarios, we have found that the No Gut Check difference is huge for the Japanese and causes problems for even the Marines. I do like how the designer has really reduced some of the Japanese Units values to compensate for this significant ability. I also love the fact that their lack of a Gut Check Number forces the Americans to look at utilizing more Fire Groups than single attacks. It is very difficult to get the Firepower number required to get X and C results on the Infantry Combat Table consistently against the Japanese by doing single fire. The answer is to use more Fire Groups.

In the end, the Marines stand tallest in this expansion as they are Elite Units, gaining the bonus to Rally checks and their additional Firepower in Melee. They can bring some significant Firepower against their enemies and I didn’t really even talk about the BAR and its advantage. I also like how the tactics have had to change due to some of the advantages and enjoy playing as both the Marines and the Japanese.

In Action Point 4, which is the final post in this series, we will take a look at the new Hell Bent Expansion (yes the game came off of Kickstarter with an add-on expansion) and examine the scenarios available in this addition.