Over the past few months, the frequency of designer interviews appearing on our blog has been drastically reduced and I hope to start rectifying that situation going forward.

One interesting designer that I’ve been paying attention to lately is Christopher Davis. In fact, a few months ago we interviewed him about his Hero of the Soviet Union game and recently I saw some new pictures for his new design called Operation Storm-333.

*All graphics used in this interview are for playtest purposes only and are not finalized. 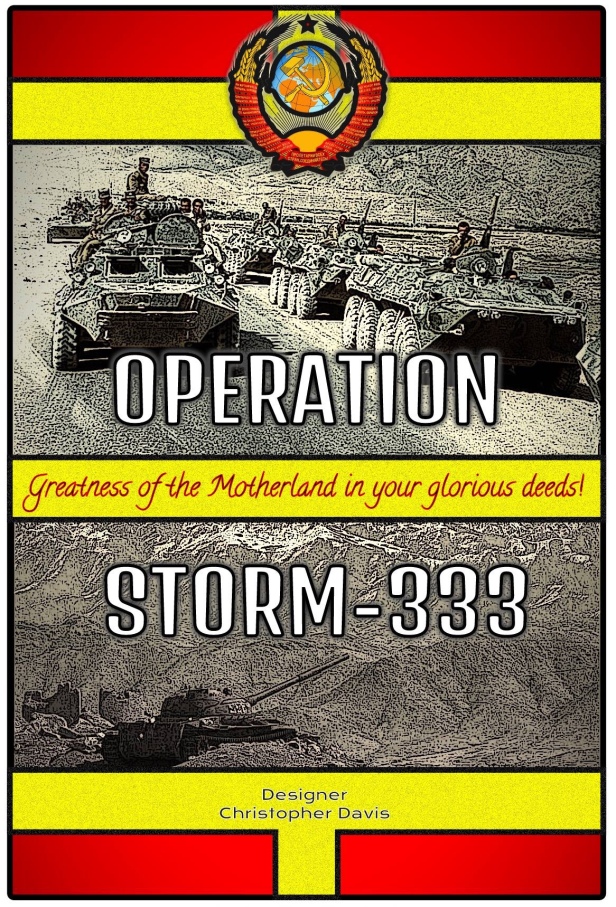 Grant: What drew you toward doing a game on the 1979 Soviet coup that led to the Afghan War? Why should gamers be interested in the subject?

Christopher: In a way the operation defined the end of the Cold War, and the post Cold War world. A wild success for the Soviets, the operation precipitated the Soviet-Afghan War, then the Afghan Civil War, and finally the U.S. invasion of Afghanistan to topple the Taliban. The operation was also somewhat complicated, and its success was contingent on a number of variables.

Grant: What sources did you consult to get good historical information on the event? What book would you recommend as a good read for someone interested? 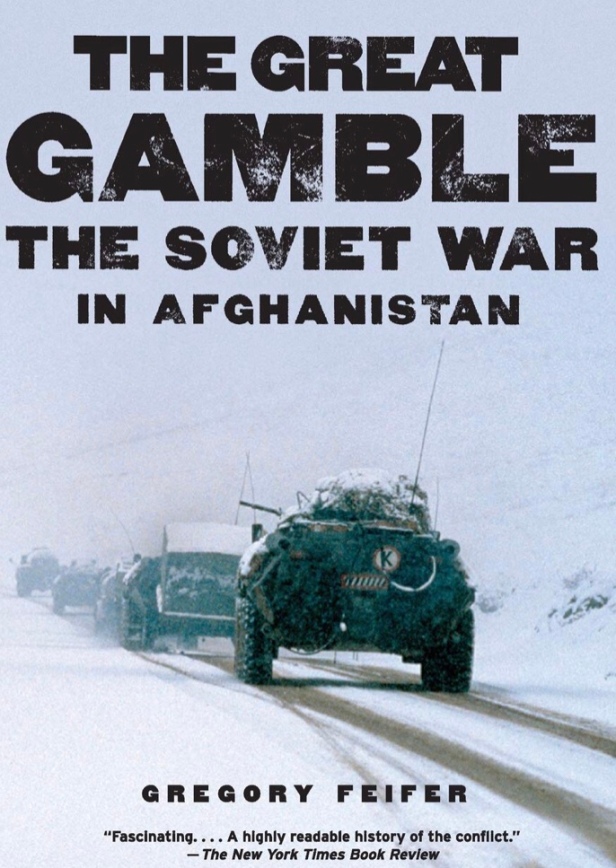 Christopher: I principally used The Takedown of Kabul by Lester Grau and Block by Block: The Challenges of Urban Operations published by the U.S. Army Command and General Staff College. My favorite book about Afghanistan’s turmoil is The Great Gamble: The Soviet War in Afghanistan by Gregory Feifer.

Grant: What did you feel was key to model from history in the game to provide the best play experience?

Christopher: Prior to the start of the operation, the Soviet special services worked diligently to prepare the battlefield for the invasion. They collected intelligence and even attempted to poison the Afghan president, Hafizullah Amin. Like the battle itself, much of this depended on the actions of specific individuals demonstrating initiative and daring. So – I want to capture that feeling.

Grant: What other games or designs have influenced you in this system?

Christopher: Solitaire games like Enemy Coast Ahead: The Doolittle Raid (one of my all time favorites) and Pavlov’s House (another favorite) really captured, for me, how to place a specific tactical action within a larger strategic context while making it manageable and enjoyable for the player.

Grant: What has been your biggest challenge to date with the design? How have you overcome the problem?

Christopher: Probably like most solitaire games, the AI system is the most challenging – how do you make it challenging while also minimizing the work required of the player? It’s not quite there yet but it’s getting close.

Grant: How does the game play to simulate the process of the coup?

Christopher: Over the course of several game months, the player plans to execute 8 tactical missions by assigning key leaders and military units, collecting intelligence, and conducting rehearsals. The 8 missions represent the key targets during the historical operation, including the presidential palace, the airport, and military and counter-intelligence headquarters. The player must neutralize the Afghan defenders and, if present, capture key political leaders.

Christopher: The game starts with the Planning Stage, which consists of several rounds, the Assembly Stage, and then finally the Execution Stage, where the player conducts each of the 8 tactical missions.

Grant: What is involved in the Planning Stage?

Christopher: During the Planning Stage, the player recruits key leaders, attempts mission tasks, develops intelligence, advocates for support from the Power Ministries, and mobilizes tactical units. The player can preposition key leaders and some military units in anticipation of operational needs. At the start of each turn, a random event occurs, which may affect conditions on the ground, political support, and other factors.

Grant: How is the Planning Board used in this stage? Can you please show us a picture of the board and explain the different parts and boxes? 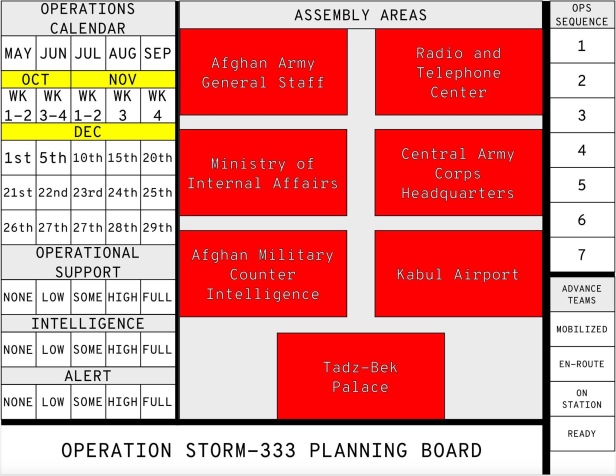 Christopher: The Planning Board is used to manage the decisions and commitments made during the Planning Stage. The calendar tracks the game turns, including the planned date of the execution of the operation. The Assembly Areas track the commitments of units to each target.

Grant: What are the Operational Support, Intelligence and Alert tracks used and how do their levels change?

Christopher: Operational Support tracks the support of the Power Ministries; their backing provides the player with new units and operational and tactics cards. The Intelligence track shows the player’s knowledge about the defenders at each target; and the Alert track is the Afghan defenders’ knowledge about a potential Soviet attack. Each can change based on player actions (and sometimes inaction), as well as random events.

Grant: Recruiting Key Leaders is a major part of the Planning Stage. Who are these Key Leaders and what unique abilities does each have?

Christopher: Right now there are 39 planned Key Leaders; these include the commanders of the KGB, GRU, and VDV [Soviet Airborne] troops that participated in the operation. It also includes military advisors and even linguists. Each Leader has an assigned ability. Additionally, key leaders may be forward deployed to Afghanistan to collect intelligence or a special task (such as sabotage). Ultimately, the key leaders provide command and control during the Execution Stage.

Grant: What is important for players to keep in mind about when they choose their Key Leaders?

Christopher: Key leaders are essential to every stage of the operation. There’s not enough time to recruit all 39, so deciding to use them strategically, such as forward deployments to collect intelligence, or to lead combat troops during the Execution Stage is a balance that players will have to decide.

Grant: What Special Tasks are available for Key Leaders to be assigned to and why are they important?

Christopher: Special tasks are actions key leaders can take during the Planning Stage to help set the stage of the operation. There’s a unique one for each target; for example, the Special Task for the Afghan Army General Staff target is an “Officer Dinner Party” where the key leaders can collect intelligence on all Afghan targets. To conduct a special task, the player needs the appropriate Operational Card, which gives instructions about necessary conditions. Failure of a Special Task may result in loss of Operational Support of a Power Ministry and the increase of Alert.

Grant: How do players develop intelligence on targets? How can this process hinder or help in accomplishing tasks?

Christopher: Each target has a base number of Afghan units assigned to it that are selected during the Execution Stage. However, with each increase of Intelligence for a specific target, the player draws one random Afghan unit during the Planning Stage; this unit counts against the number of units to be drawn later. Effectively, this means the player has greater knowledge about the defenders and can make better choices about what units to assign to a specific target. Intelligence can be increased through key leader actions or the completion of a special task.

Grant: What are the Power Ministries and how do they effect the game? Why does a player need them?

Christopher: The Power Ministries are the KGB, the GRU, the General Staff, and the Politburo. Their support is necessary to get more military resources – leaders, units, operational & tactics cards – that can be assigned to targets.

Grant: What events are contained in the Event Cards? Can you tell us about a few specific examples?

Christopher: The events, drawn every turn, provide more variables during the Planning Stage. These include, among other things, Politburo Reshuffling, which randomly affects the Politburo’s support, and Politically Unreliable, which forces the player to permanently remove one key leader.

Grant: How are Operational Cards used? Can you share an example and tell us what it does?

Grant: What occurs during the Assembly Stage? Why is this an important step in the process?

Christopher: The Assembly Stage is the bridge between the Planning and Execution Stages. Any remaining leaders, units, and cards are assigned to targets. Additionally, the player determines the Mission Sequence: that is, the order in which the 8 targets will be resolved. This is important because the target’s status (active or inactive) alter global game conditions. For example, while the Kabul Airport is active (that is, not captured), the player may not reinforce other missions (that is, move assigned units from one mission to an adjacent one). But when the airport is inactive (that is, captured after a successful mission), the player may reinforce subsequent missions.

Grant: What happens in the Execution Stage?

Christopher: During the Execution Stage, the player conducts 8 missions in the Mission Sequence order. These take place on hex-based tactical maps. 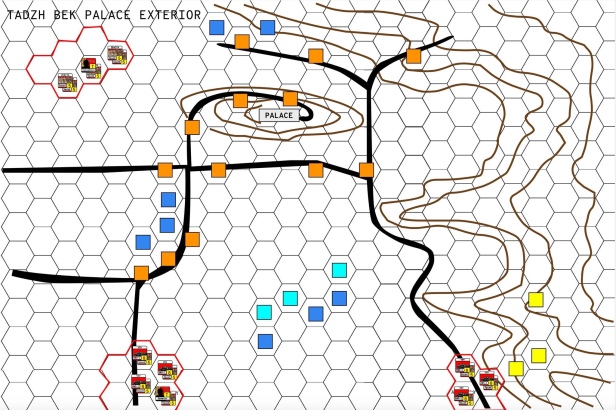 Grant: What does the combat system entail and how does it work?

Christopher: Combat turns are resolved using a chit-pull system – there are generic chits as well as specific ones that may be included by cards assigned to that specific mission.

Grant: Why did you feel the use of a chit pull system was the best mechanic to use in the combat system? What advantages does it offer?

Christopher: The chit-pull mechanic fits best to account for the chaotic and fluid nature of urban combat.

Grant: What are initiative counters and how are they used?

Christopher: At any given time, either the Soviets or Afghans have the initiative. When pulled, the initiative chits, a variable number of which are included in the mix, provide the side with the initiative with another action they otherwise would not have. Initiative may change during the course of a mission.

Grant: What types of units are included in the game and how did you go about assigning combat factors and defensive values?

Christopher: There are a number of units in the game, including special purpose teams, snipers, armored vehicles, infantry squads, and a variety of heavy weapons. The values assigned to them are still a work in progress.

Grant: What different abilities do units have?

Christopher: Each unit has a unique ability – for example, KGB teams can conduct “CQB”, which increases their lethality in close combat.

Christopher: Players win the game by successfully capturing all 8 objectives. Similar to ECA: Doolittle Raid, I intend to include a debriefing book for various outcomes.

Grant: How does the difficulty of the individual targets change from game to game?

Christopher: The difficulty level is typically driven by the Alert level and the random selection of units. Additionally, events may affect the difficulty of a specific target.

Grant: What does the system do really well? What areas are you still working some of the bugs out?

Christopher: I think the system really captures the relationship between strategic and operational planning with tactical outcomes. The better plan that is developed, the greater the likelihood of success. I’m still working on the combat system, specifically the AI.

Grant: What are your plans for publishing the game?

Christopher: I would definitely like to pursue publication through an established war game company.

Thank you for your time in answering our questions Christopher. I have appreciated watching your posts and interactions on Facebook as you try to perfect your craft and create a playable game. Keep up the great work and I hope that these interviews bring some attention from wargame publishers.