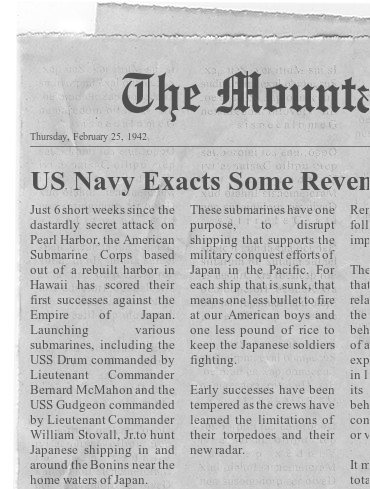 Gato Leader: The Battle for the Pacific is a solitaire only game in the Leader Series from DVG Games. The game focuses on the American Submarine campaign in the Pacific during World War II from 1942, shortly after the dastardly attack by the Empire of Japan on Pearl Harbor, through the end of the war in 1945. Players will be placed in command of a squadron of Submarines to control over the course of a Campaign. The primary goal of each squadron commander is to sink enemy merchant ships and warships in order to meet their Victory Point goal for each chosen Campaign.

In this Action Point, I will introduce you to the system and show you how players have to use Special Option (SO) points to purchase their Submarines, upgrading them with advanced weaponry and instrumentation, to battle the Japanese in the Pacific over the course of the duration of a Campaign consisting of a certain number of patrols.

First off, lets take a quick look at the Campaign Sheets. There are four different Campaigns that can be played in Gato Leader representing the different points of the struggle against Japan. The four Campaigns include:

Holding the Line – Submarine operations from Australia during 1942.

Against the Sun – Submarine operations from Pearl Harbor during 1942.

Turning the Tide – Submarine operations from Australia and Pearl Harbor during 1943.

Setting Sun – Submarine operations from Pearl Harbor during 1944 and 1945.

These Campaign Sheets include a Campaign Map, the date of the Campaign (this is important not only for historical flavor but because certain Submarines are not available until later years of the war), as well as a listing of the various options for length of the Campaign that players can choose. You can choose either a Short Campaign, which usually means that each of your Submarines will only be out for one patrol, Medium, which consists of at least 2 patrols and Long which consists of up to 4 patrols. A patrol is simply defined as a period of time that a Sub leaves its Port, moves around on the Strategic Map from Map Area to Map Area for several Strategic Segments, and then returns to Port. 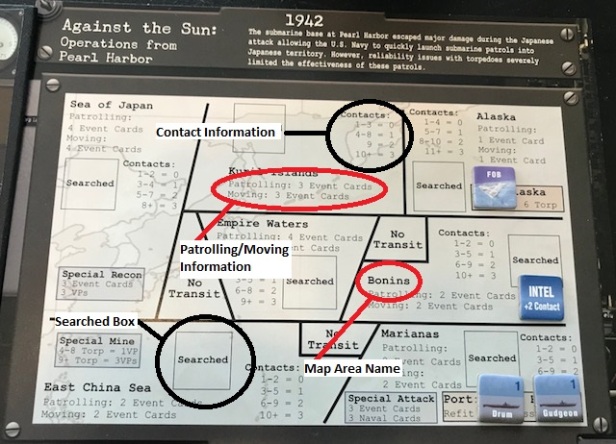 The game plays with two different maps. The first map is the Campaign Map or strategic Map as it shows the relative position of your Submarines and various Map Areas and Ports as well as transit areas and special mission boxes. The 2nd map is the Tactical Display which is drawn in the shape of a radar array that shows the location of the convoy that a Submarine has made contact with and the relative position of the Submarine and the various merchant, escort and naval ships assigned to that convoy.

As you can see in the picture above, the Map Areas are named and contain lots of key information for game play, including the number of events that are drawn when a Submarine is moving into, through, or patrolling that Map Area, and various special mission boxes, such as Mining, Special Attack missions, Rescue and Recon missions.

The Contact information is used to determine what ships the Submarine will find while searching in the area. Contact rolls are a major part of the game and if you don’t roll well, you will not be able to find the number of ships required to meet your VP objectives. Contact is a good thing!  The Contact role happens at the beginning of the Tactical Segment and is a roll of a d10 that is modified by various elements. A Submarine has to be fit for duty to make a Contact roll so if they have taken a load of Stress from the random events that are encountered while moving into a Map Space or patrolling they will be unable to make a Contact roll and will be moved to the Searched Box, effectively ending their turn. The player simply rolls a ten sided die and modifies the roll with various Contact Determination Modifiers. These Modifiers include both positive and negative numbers so you have to pay attention. The modifiers are as follows:

+X for any modifiers found on played Event Cards 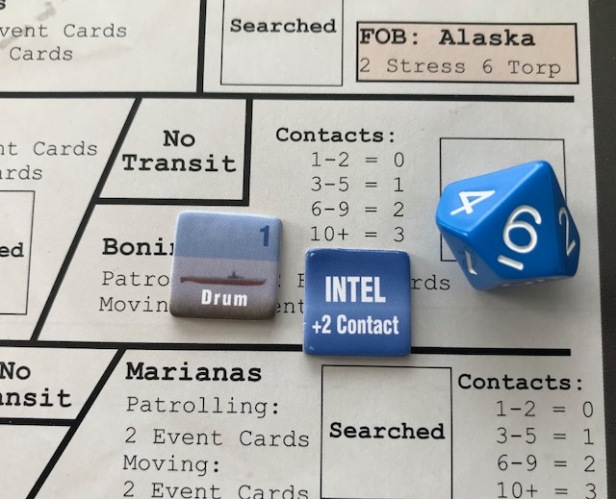 For example, my Submarine the USS Drum, which is equipped with Radar, attempts a Contact roll after moving from the Marianas to the Bonins Map Space. You will notice that I purchased an Intel Counter in the Strategic Segment which will grant me a +2 Die Roll Modifier on all Contact rolls for this turn only. So my final modifier bonus is a +0 figured by the following: -3 for Moving, +1 for Radar upgrade, +2 for Intel Counter. My roll is a 6 so I consult the Contacts table found in the Map Space and find that this result gives me 2 Contacts, meaning that I have found 2 different convoys moving through this area. We will cover how to deploy the different convoys in our next Action Point and also take a look at how combat works.

After this roll, I place a Warning Counter in the Map Space that will grant a -2 Contact roll modifier in future turns and also place a 2 Contact marker in the space to remind me that I have 2 different convoys to attack. 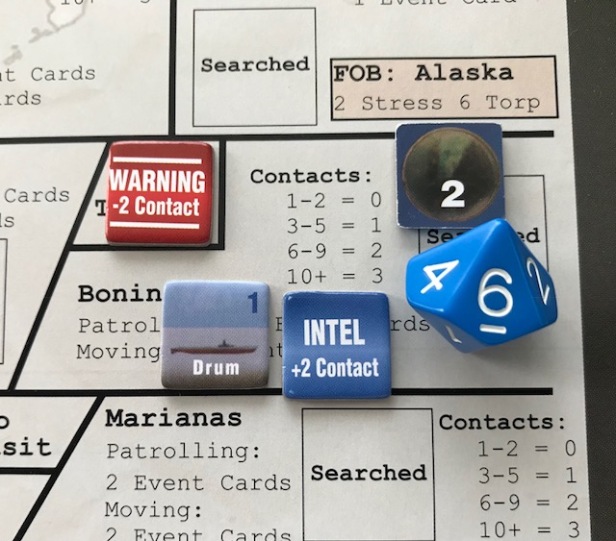 Now to the good stuff….the Submarines! Gato Leader includes the following U.S. Navy submarine types: S Class, Narwhal Class, Permit Class, Salmon Class, Tambor/Gar Class and Gato/Balao/Tench Class. Each of these class of ships are available based on their historical years of service. So, when a player selects a Campaign, they must take out of consideration any Submarines that are not in service during that time frame.

The player then consults the Campaign Sheet to choose the length of their campaign to identify the number of Special Option (SO) Points that they will have to spend over the course of the campaign as well as what Special Options they will have to purchase before and during the Campaign. In this example, I will use the Against the Sun 1942 Short Campaign. I consult the above picture table for the Short Campaign and see that I will have to complete 1 Patrol per Submarine and I will have 32 SOs to spend during the campaign.

I first have to choose my Submarines and then outfit them with various upgrades. The first boat that I choose is the Drum commanded by Lieutenant Commander Bernard McMahon, which is a Gato Class Submarine that was in service from April 1942 through August 1945. The Campaign I chose is during 1942 so this boat qualifies. In looking over the various options of skill for the card, I choose the Veteran version which costs 12 SO Points. I then choose to upgrade the boat by adding Radar and a Torpedo Modification. The Radar will give me +1 on Contact rolls and the Torpedo Mod is very important as it will mean my torpedoes are considered to be one year later on the Torpedo Dud Table and will malfunction less. I spend a total of 15 SOs on the Drum and she will end up being my workhorse over the life of my first Campaign. 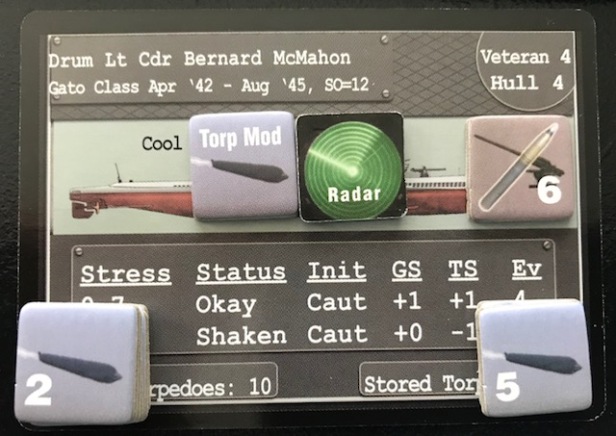 The 2nd boat that I choose is the Gudgeon commanded by Lieutenant Commander William Stovall, Jr. that was in service from January 1942 through August 1945. I choose the Trained version of the boat which only costs me 6 SOs and also outfit it with Radar and a Torpedo Mod. I choose to purchase a Mine mission and have to substitute a certain amount of my torpedoes with mines. In this case, the mission box that I am eyeing in the East China Sea requires at least 4 mines to gain 1VP. I feel that this is a good investment and will guarantee me some easy Victory Points. I spend a total of 11 SOs on the Gudgeon. 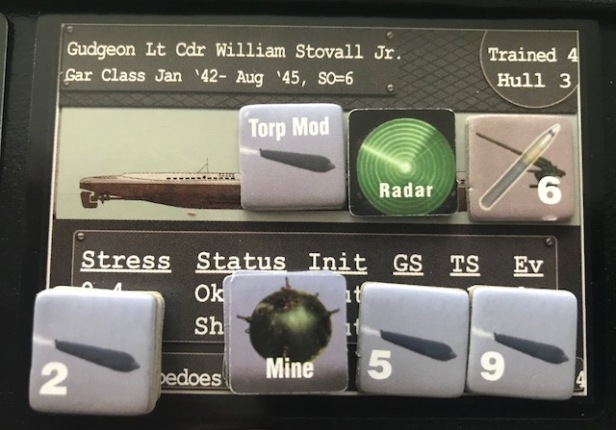 After purchasing all of my boats, upgrading them and buying Special Missions, I am left with only 6 SOs, with which I choose to place a Forward Operating Base in Alaska for 2 SOs and buy an Intel Counter for 2 SOs leaving me only 2 SOs remaining.

This is the best part of the Leader Series from DVG. Purchasing your units and making decisions at the beginning of the game that will effect you throughout your play. I absolutely love this aspect and they have improved upon this in each game that has come out. I love that there are meaningful decisions at the beginning of the game and not just as you get into things. I have to plan out how I think things will turn out and figure ways to alleviate my negatives, such as the accumulation of Stress from attacks and Event Cards, as well as how to repair and refit my Sub without having to go back to port which would end my game for that particular Sub (such as buying a FOB).

I hope you have enjoyed this Action Point taking a look at the setup and process to outfit your boats. Gato Leader: The Battle for the Pacific is a very fun and interactive game that I have played several times and still am not tired of. In fact, I am able to try different strategies each game, such as Wolfpacks, Crash Diving when I am attacked to avoid damage, and Silent Running to sneak up on those pesky escorts.

In our next Action Point, we will take a look at how to set up a contacted convoy and the process of Sub movement and attack.

If you are interested, you can check out our unboxing video for the game.

2 thoughts on “Gato Leader: The Battle for the Pacific from Dan Verssen Games – Action Point 1”