I have always had a fascination with Zombies. From my earliest days watching several movies like The Return of the Living Dead, Night of the Dead and later Dawn of the Dead (one of my all-time favorites) leading into today’s television series such as The Walking Dead and Z Nation, I have simply been fascinated with the impending zombie apocalypse, and man’s struggle to cling to life and rebuild what civilization he can. Why does this genre appeal to me? Well, there are many things, and it isn’t just the brain eating undead.

To me, a good game covering Zombies must include several elements. First, it must have Zombies that you have to worry about, either as they are building up and attempting to get into your camp, fortress, or wherever it is that you are staying. But, I don’t necessarily like fancy zombies that are more than just shambling blobs of rotten flesh. No exploding Zombies, fast Zombies, jumping Zombies for me please. Second, the game must include elements of man’s struggle against his own humanity. There must be tough choices. There must be consequences and there has to be some morally murky and difficult decisions. Finally, the game must keep me involved and always thinking about how to get out of the current predicament. Do I need that extra ammunition or should I be worried more about food? If I go this way, and distract the Zombies, can we then slip into the next area unseen? Should I build a barricade or simply kill another Zombie? Who among us is not part of the team and do I need to overcompensate for their potential treachery?

Well, I have played quite a few Zombie themed games but the following are the games that I have found are the most well done in my Best 3 Games with…Zombies! 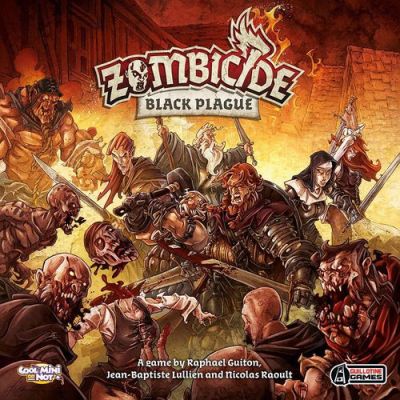 Zombicide: Black Plague is one in a long line of Zombie themed games in the Zombicide series. I enjoy this particular iteration mainly because it is in a fantasy setting, with Elves, Dwarves and Wizards fighting off the hordes of undead, and because it uses tactical miniatures to have players maneuver around the board trying to stay one step ahead of the undead to complete objectives to win the game. The players control anywhere from 4-6 survivors and are trying to survive. Black Plague uses a really simple dice rolling mechanic to score hits on zombies. The number of dice you roll varies with the weapons that you use and any special abilities you might have. Each hit you score on a die kills one zombie figure. The crux here is that there is a targeting priority. What happens is that you swing your sword in a square for example, and you do X amount of hits and remove X amount of zombies. But regular Zombies have to be killed before the mighty Fatties, so you can’t simply target and snipe the big guy! You have to instead wade through the blood and guts of the regular undead before you can remove the scary mean guys or the Necromancer, the guy controlling and making the Zombies. So even though the combat system is really simple, simply swing and roll, it actually can provide some really interesting tactical situations to try 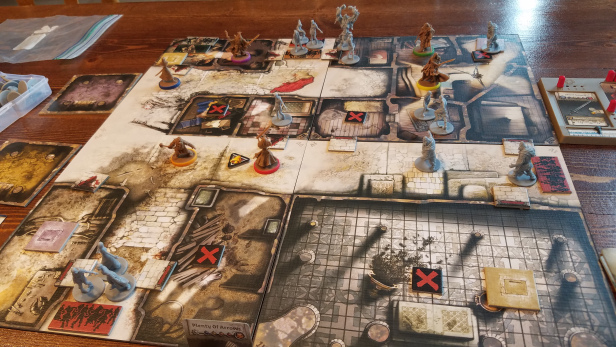 and game your way out of before getting overwhelmed. The miniatures are also fantastic, as would be expected from a CMON Games product, and the fantasy theme is really great. I love the experience system as well as with each Zombie kill players will gain an experience that can unlock a better power, and there are choices among powers, so there is some customization as well. The players also can find treasures, magic weapons and special items by scavenging areas but they have to be careful as each new area they enter could contain Zombies that will come after them. Overall, a simple, trashy dice fest with some great miniatures. One of my favorite Zombie themed games.

2. Dawn of the Zeds (3rd Edition) from Victory Point

Dawn of the Zeds is a very versatile game from the States of Siege series, in that it can be played fully co-op, competitively, or solo. There’s also 6 or 7 game modes (difficulties) within that, so you can tailor the game to what you want it to be.

Gameplay is really fairly simple, although there are very difficult choices throughout. Players will pick their characters and some NPCs to play with based on the scenario, after selecting a difficulty level, then construct the event deck that will run you through the course of the game. You can also adjust the length of the game (which in turn adds to the difficulty again) by including more cards that you have to survive in the event deck.

Depending on the game level selected you’ll then play through the deck one card at a time, going through a series of game phases, triggering zombie placement and movement, attacks, and other random (usually awful) events. The game turns have a great structure to them, and are simple and cleanly laid out. Once you’ve played two turns you’ll know exactly how to play the game without picking up the rulebook.

Each player gets one, and only one action, then the players will have a collective number of event actions ranging from 1-4, but mostly 1 or 2, as dictated by the event card. With these meager actions the players have to cobble together some kind of defense against the waves of oncoming zombie hoards attacking Farmingdale from all sides. If the Zombies ever enter the center of Farmingdale the game is lost. Herein lies the reason that I love this game. It is so limited in what you can do on purpose and forces you to have to make good choices or you are doomed. Making sure that you forage for bullets or food is always important, because if you run out of either, you are going to get overwhelmed. A shrewd use of each of the characters special abilities is also very important and if you don’t have each character generally doing what they are good at, you will not be able to keep up. We have played this game multiple times and won our fair share but also lost many times. To me, that is another reason that this game is good, it is NOT easy! 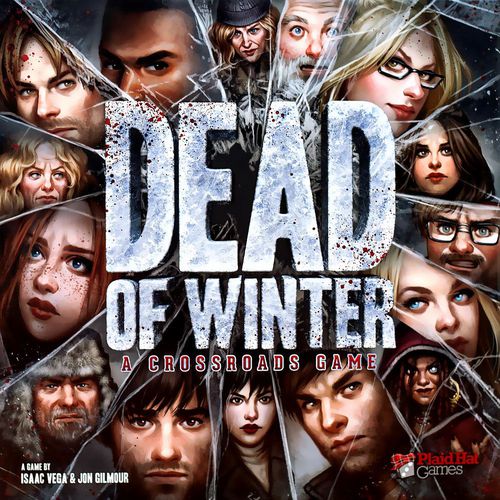 1. Dead of Winter: A Crossroads Game from Plaid Hat Games

Now we come to my favorite Zombie themed game of all time…Dead of Winter! Why is this game so great in my opinion? Well, it checks all of the boxes for the items I mentioned above.

But, the best part is the Crossroads Cards. These cards contain the element of the narrative and provide the difficult choices that players must make. Sometimes these choices are extremely dark and provide players with pretty intense moral dilemmas. Do you save the mother and her child knowing that they will not contribute to your efforts but will consume food? Do you kill your drug addicted fellow survivor because they were shooting up with the precious medicine you just found to meet the demands of a crisis? Such great decisions that create an intertwined narrative that players can’t help but become deeply involved in. 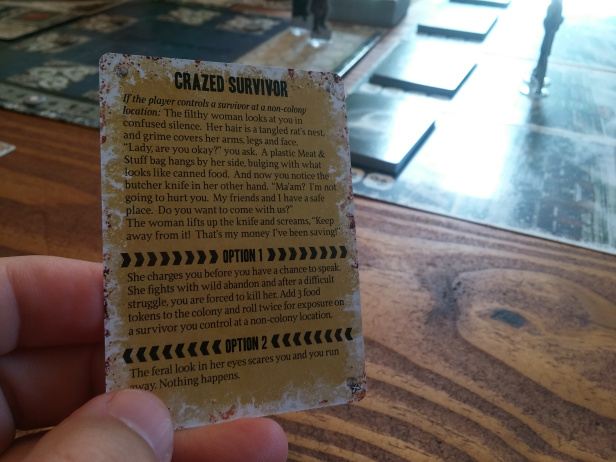 But the game also does a great job of forcing doom upon the team of players as each round you will be required to meet the demands of the drawn crisis card or lose morale. These demands are usually in the form of requirements for a number of cards to be discarded in the crisis area, upside down and hidden from the other players. The crisis card may say that you have to place 4 medicine cards in the pile or suffer some terrible consequence. The great part of this though is the secret nature of what is added to the pile. There is usually, but not always, a player who has drawn the Betrayer card and their goal is to make the group lose. So, in pursuit of their goal, they might discard a fuel card into the crisis pile pretending that it is one of the required medicine cards. So, usually once enough cards have been placed in the pile to satisfy the crisis, players will take a breath and not worry about the crisis and can focus on other tasks. Until the day of reckoning comes at the end of the round when the crisis cards that have been discarded to meet the demands are shuffled and then revealed. And you might see that you are unable to meet the demands because someone put in a card that wasn’t what the crisis needed and you come up one card short. Only then will this betrayal be known but you will still not know who did it. Well, you can guess by watching other players actions and how they are playing the game, but it is rather hard. I have been accused of being the Betrayer before and voted out of the group (Thanks Alexander!) when I have done more for the crisis than other players. But that is the great part of the game. It is truly a deliciously stressful and engaging experience of fighting off the undead; but more importantly, fighting off each other!

I hope that you have enjoyed my look at the Best 3 Games with…Zombies! I have played several other Zombie themed games, including Zombies! from Twilight Creations and The Refuge: A Race for Survival from B&B Studios, but felt these three were the best out there. Please let me know what games you prefer in the comments.