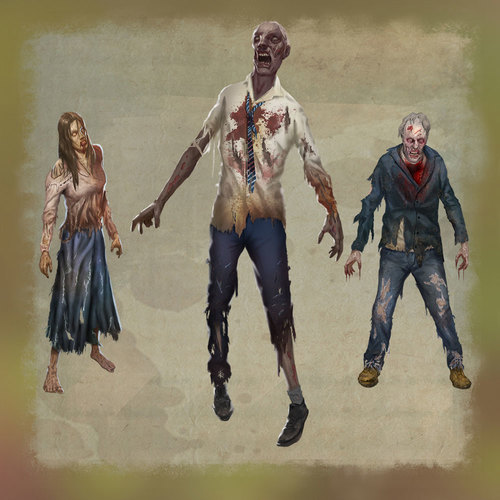 I attended Gen Con this year as a member of the press and as such was placed on an email list where companies would send out informational messages about their products offering demos at their booths. One of these many emails that caught my eye was from B&B Games Studio about their zombie race game called The Refuge: A Race for Survival. I was personally invited by owner Billy Lu to their booth for a demo so I thought I would give it a shot. So on Friday, I made my way to the back of the Exhibit Hall to the entrepreneurs area and boy was I glad I did. The Refuge is currently on Kickstarter at https://www.kickstarter.com/projects/2115119055/the-refuge-a-race-for-survival and was funded in its first day and currently has raised $12,306 with 362 backers (as of September 18th) and still has 26 days left.

What is The Refuge: A Race for Survival?

The Refuge: A Race For Survival is an interesting and strategic zombie-themed board game for two to six players that is easy to learn, family friendly, and is great for parties and game night! Players use strategy, planning, and educated guesses to outwit their opponents and escape zombies in hopes of being the sole survivor that gets into the refuge and wins the game.

The story behind the game is as follows: The year is 2033. Wars plagued the Earth. Planetary devastation leads to chemical reactions. People started transforming into undead creatures. The Earth began to divide and shatter. Countries and last stands fell, one by one. There is now rumor of a refuge, a final chance for humanity. But they only have room and supplies for one more survivor. This is a race to get to The Refuge.

The game is played with Supply Cards that are used by the players to advance up the game board and move ever closer to the main goal of being the first (or the closest to when the Supply Deck runs out) the refuge which is the top of the board.  These Supply Cards take the form of actions, such as Jump, which allows the player to literally move over a tile and any obstacle in that tile such as a zombie, or use items such as a Weapon to eliminate zombies in your space or the Adrenaline shot which lets you take an additional turn after using a weapon. On their turn, players can move one space in any direction, draw a Supply Card or use a Supply Card. Simple as that! The key to the game is to accumulate cards in your hand that can be used in powerful combinations to make aggressive moves toward the finish line while avoiding zombies, as they can kill you and send you back to the start, and while hindering your opponents as you want to reach the refuge and keep them out!  When you land on one of the spawn spaces players will be allowed to place a new zombie from the supply on a spawn space near one of your opponents to cause them to change their plans. Players can also move zombies by landing on one of the hazard spaces. The players must also find a key card in order to be able to unlock the gate to the refuge when they finally reach it. But be careful, there are only 7 keys in the 49 card deck and other players might hoard them to keep them away from you.

What I Liked about The Refuge

Easy to learn rules – this is a simple game that is made to play quickly and be fun but competitive and strategic. The rule book is only 6 pages and there are lots of pictures.

Art is fantastic – the art is very good and definitely adds to the bleak world depicted. I love the box cover and you can truly see the relief in that characters face of having reached the end of his journey!

Great miniatures – I love the sculpts and the quality. My favorite one is the green loner, with his covered face, steely gaze and impressive stance showing the reason he is a survivor!

Simple yet strategic play – the game play is good and surprisingly strategic. The problem with all card games though is draws. I love the combos that are possible and the game plays best with 4+ players as the player interaction is increased and the struggle for the scarce resources intensifies.

Card draws – with there only being 7 keys, which are necessary to win, if you don’t draw one you are in trouble. You can rely on playing a Steal Supply Card but it is still random as you will have to draw a card from their hand without looking.

Replayability – I’m a little concerned that it will become monotonous after only a few plays as the board is static and the path to the refuge doesn’t change. This could have been mitigated with arrangeable tiles for variety.

I enjoyed playing The Refuge: A Race for Survival and am glad that I gave it a chance. The gameplay is good and simple, the rules are well written and easy to understand and game play is surprisingly strategic and competitive for a card game. I also love the components, the miniatures and the art is very thematic. I recommend the game and while it is only $25, I proclaim it a good Kickstarter value.

2 thoughts on “Gen Con 2016 Game Recap: The Refuge: A Race for Survival by B&B Games Studio”