Rifles in the Ardennes showed up last month, and anytime there’s an affordable solo game I’m fully on board with giving it a try. I’ve played a few different games from Tiny Battle Publishing in the last year, and there are times that I think the title of their company is a little misleading – few of them are ever tiny! But, they are consistently well made, interesting and well worth the price. Rifles in the Ardennes is a title that ended up being a fast playing, fast paced, solo tactical war game. If you want to watch an ‘unboxing’ you can do so here, or even a full video review you can do that here.

Rifles in the Ardennes

First off – calm yourselves. The title of the game is actually a little misleading. You might get the impression this is yet another Bulge game, but honestly that’s just not true. I thought something was odd when Grant unboxed the game and it had a Russian OOB and counters. Upon reading the rules and browsing the scenario booklet, it’s safe to say that really the game is a more generic tactical World War II solitaire game. This is in no way an indictment of the game, in fact, I think that’s a positive thing. The game is full of great decision making and cool stories evolve from it, but the specific battles within the late war in the European Theater are “up to you” so to speak. So stop rolling your eyes, as this is not just “another Bulge game”.

You will command a small tactical force, typically consisting of now more than two teams, and will go on various patrols on a very small and up close and personal scale. Conducting missions, such as recon patrols, rescue missions, or precision strikes against enemy heavy weapons, is the name of the game. The board is a generic and very plain board with just 6 spaces numbered in descending order from top to bottom. Each scenario will have you semi-randomly distribute terrain counters, such as buildings, forest, fields, etc. This will be the terrain you will need to navigate, hide in, fight through and overcome in order to complete your objective. 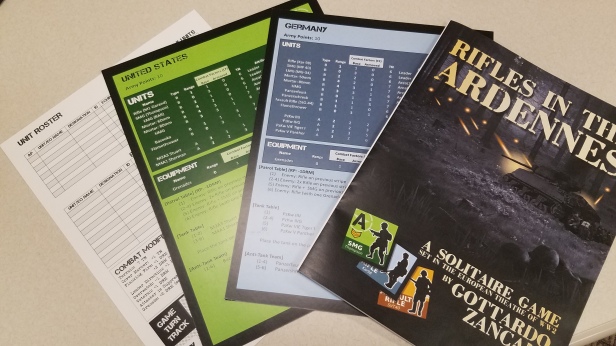 Your forces will consist of 10 points worth of units. Each nationality in the game, including German, American & Russian, have an OOB from which to “buy” their squad. With only 10 points to purchase units with the decision making in this step is both very important but also not overly complex. You can choose units as well as equipment and they all have a point cost. Pretty straight forward. Because the game isn’t immensely heavy and isn’t very long if your super experimental team goes down in flames then you can just start again with a new squad without much fuss.

I don’t know about you, but not every wargame needs to be a 10 hour operational ordeal. Rifles in the Ardennes fills a really good niche for me, it’s not overly complex, it has a small table footprint, and it doesn’t take long to do a mission from start to finish. With only a small amount of spaces to traverse through (and then possibly return) the games typically take around 30 minutes to resolve once you get the rules down. My first play i had to keep referring back to the rulebook but soon graduated from it and could play more from feel and more often than not get it right. I say ‘getting the rules down’  like that’s a difficult thing, but really they are very well written and only about 10 pages all told.

Each mission you will move through the different areas, spending your meager action points to find cover in terrain, make fire attacks or to progress further in the mission. Each area has an event marker in it that will typically spring enemy ambushes, drop some inclement weather, or some other adverse effect you have to overcome. If there are no enemies (or just one) on the board you get to roll to see if any random enemy patrols wander onto the board, which is always fun. Fire resolution is not complicated. your units have a fire power value they’ll use to hit an enemy units’ target number after being modified by terrain.

Commanders can coordinate combined fire attacks, or level LMG fire at multiple targets. At this scale, you can equip grenades to your riflemen and make single grenade attacks that will target groups or enemies as well. Any time you take a hit you receive a suppressed marker, and a second hit eliminates a unit – really simple. There’s a rally action to remove those suppression markers during your turn, but understand that sometimes disaster strikes and your squad will get wiped out by large ambushes and terrible rolling.

Is this the game I’ve been looking for all these years?

This is 100% the game you didn’t know you needed at your desk at work. The foot print of the actual game board is just a single sheet of letter sized paper. You’ll then have the scenario booklet, a single player aid card and your team’s log sheet (you can use literally any post-it note or even pieces of paper). Between this and Silent Victory, I’ve got my solitaire desk games covered for life.

Rifles in the Ardennes is fast playing, has almost full tactical agency, and in doing so, tells a great story. It’s not as rich, as complex and detailed as something like Fields of Fire from GMT Games, but that’s a good thing. Fields of Fire is one of the best solo games out there, but it’s a monster to learn – like 50 pages of dense rulebook. Rifles in the Ardennes is a triumph in it’s simplicity whilst still giving a fun challenge and good replayability. The campaign aspect means you can name and follow your squad through an 8 mission tour of duty and take that story to the next level.

For the price point, this solo baggie was a huge hit for me. It wont make your wallet hurt, and delivers what you would hope that it does: Fun. Sometimes, I find myself getting caught up in historical simulation, accuracy, component quality, and the minutiae of game design and forget the most important part: was the game fun? In this instance, the answer is a resounding YES! Rifles in the Ardennes is fun. It’s fun the first time, the second time and the third time. With all the different unit compositions, the three different armies and the 8 or so missions they can each play through there’s actually a lot of game here and I couldn’t be happier.

You can pick it up for around $30.00 here: https://tinybattlepublishing.com/products/rifles-in-the-ardennes

10 thoughts on “Review: Rifles in the Ardennes from Tiny Battle Publishing”