Here I Stand: Wars of the Reformation is an experience packaged in a game that attempts to boldly cover the political and religious conflicts of early 16th Century Europe. The game focuses on the struggle of religious reformers such as Martin Luther, John Calvin and Ulrich Zwingli as they battle the Papacy for changes in their views of God and religion. The game covers all the action of the period, including wars, marriages and ascendancies to thrones, using a unique Card Driven Game (CDG) system that models both the political and religious conflicts of the period on a single point-to-point map. 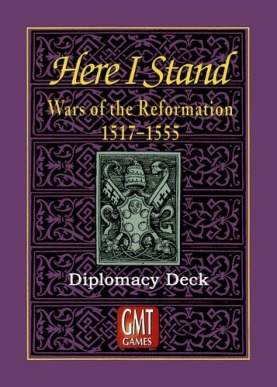 The 500th Anniversary Edition brings some changes to the classic game, including several new cards, errata and changes to the text of existing cards, as well as some added rules from its successor game Virgin Queen. One of the biggest changes in the reprint edition though is the inclusion of a previously released 2-player variant that pits the Protestants versus the Papacy, and which uses a special Diplomacy Deck consisting of 19 cards to drive the actions of the other major powers in the game including England, France, The Ottoman Empire and The Hapsburgs.

I have heard that the part that is really great about Here I Stand though is the diplomacy and alliances and with the 2-player variant these elements are lacking a little but that is a subject for a later review.

In this Action Point, I want to take a look at the contents of the Diplomacy Deck and how it is used, as well as an example of the opening round in which the Protestant player starts the game out by playing the “Luther’s 95 Theses” card.

What is in the Diplomacy Deck and how does it replicate the grand 6-player experience for only 2-players? The simple answer is that it doesn’t, but that doesn’t mean that the effort was a total waste. The Diplomacy Deck variant actually appeared in C3i Magazine Issue Nr. 19 in 2007 and simply has been added to the Deluxe 500th Anniversary Edition. It allows two players to go head-to-head as the Papacy and the Protestants, with the four other major powers continuing to “influence” the game via cards. The variant includes 19 new cards and the rules run about 3 pages. Playing time for experienced players is under 3 hours. The only other change from the regular game to the variant is that the main deck will be modified. Because only the two powers are playing, you will remove all cards that are referenced to the other powers in the game. Piracy and foreign diplomacy are now abstracted in the Diplomacy Deck via special events, and the New World, Henry’s Heirs, France’s Chateaux and other elements of the game are removed because they are unnecessary to the religious struggle over Europe.

As you can see in the picture below, the Diplomacy Cards attempt to replicate the actions of the other nations not directly involved in the 2-player variant. I say attempt as the actions are not the same as an aggressive human player would be but still serve a purpose. Some of the cards are simply extra events that can be used directly by the Papacy or Protestant player to affect the game. For example, with the Andrea Doria card, the Papacy can deactivate Genoa from their current ally and then immediately make them an ally. This could be a really key event as the Protestants may have been able to gain Genoa as an ally and was using them to simply slow down the advance of the Papal armies as they are trying to march north to engage Protestant troops.

The other three cards shown are intended to mimic the actions of the other nations in the conflict. With Corsair Raid, the playing side can eliminate enemy ships or force them to discard cards. The Invasion Cards are pretty interesting as well as they will set those nations against your enemy creating fairly powerful forces that will most definitely change the course of their plans. 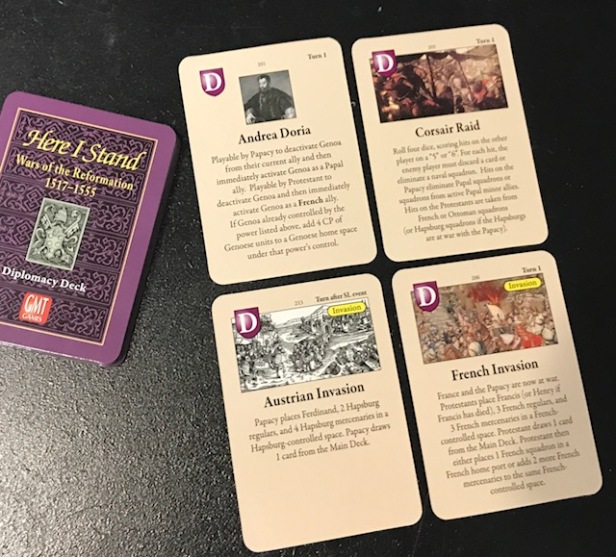 I’m afraid to report the 2-player experience is not really Here I Stand, but is a fun, quick and engaging alternative focused on the Protestant/Catholic wars of the Reformation. As I mentioned before, the real meat of Here I Stand, and the part that makes the game so great in the eyes of so many, is the player interaction, including alliances, deal making (I won’t attack you, if you attack him!) and backstabbing. For that experience, you really need to have more than 4 players and the game is really meant to shine at 6 players. But, don’t be scared off. If you can only get 2 players together, this game is very fun and we really enjoyed our play. It gave us a great introduction into the structure and function of the rules and left us wanting more. We have already begun the process of trying to drag our group into a 6-player game. Wish us luck!

The Reformation Begins the Game

Any game of Here I Stand, starts with the events of the Reformation and the playing of the Luther’s 95 Theses card. This process is rather involved and will be a tense and nail biting roll-off between the Papal player and the Protestant player. If it does not go well for the Protestants, it will set them back and make it very difficult to gain ground. Not impossible to come back, but much more difficult. I will try to take you through this very structured process to give you a feel for how it works.

If you read the text of the Luther’s 95 Theses card, it states “Add Luther at Wittenberg. Convert Wittenberg to Protestant religious influence (2 regulars are moved there from the Electorate Display). Protestant player makes 5 Reformation attempts targeting the German language zone. Protestant player rolls one extra die in each attempt. Bucer may be committed for his debater bonus during this event if desired”. That is a lot but when taken piece by piece, it is really rather simple.

This is the easy part. The Protestant player simply takes the Luther square counter and places it in Wittenberg. Wittenberg was where Luther nailed the 95 Theses to the doors of the Castle Church, which started this whole process known as the Reformation. You then simply turn the hexagonal counter over to it white side to signify that is has been affected by religious influence and has changed from Catholic persuasion over to Protestant. This white side is so glorious! You then move the 2 regulars from the Electorate Display to Wittenberg. These forces are not used for fighting at this point of the game but will affect further Reformation attempts with a positive modifier.

This next part is a bit more involved and requires some strategic thinking to make sure that you choose the spaces to attempt Reformation in with the greatest odds of success based on their modifiers and based on the dice that adjacent Catholic spaces will grant.

First off, notice the slight dotted line that runs from the Electorate Display to the west of Prague and then swings over between Brunn and Vienna on the east and on the west goes from the North Sea to the west of Munster, Cologne and Strasburg. This line signifies the German language zone and these first Reformation attempts are limited to this area. You cannot make a Reformation attempt in the areas outside of this zone, including in the Ottoman’s sphere nor the French.

The Protestant player will now identify one at a time (no need to state the targets ahead of time) each city that he wishes to try a Reformation attempt in. These spaces must either contain a Reformer or be adjacent to a space under Protestant religious influence or connected via a port under Protestant religious influence. These attempts are modified by various factors and include the following:

The Protestant player then rolls his dice and doesn’t total up the number of hits, but simply remembers the highest single number rolled. Remember, that a 6 rolled by the Protestant player represents an automatic success and doesn’t grant the Papal player an attempt to roll as long as the roll is in the target language zone. One other key point is that only one Reformation attempt can be made in each space so if you fail on your first roll in a key city, you can’t simply try again this turn. A rule that would haunt me for the entirety of my first turn.

Next, the Papal player will add up their dice as follows:

Simple enough once you get the hang of it! I wanted to show you an example of how this worked in our first play of the 2-player variant where I was the Protestant player and Alexander was the Papal player.

After playing the Luther’s 95 Theses card, I began strategizing where my best odds of success were. This came down to a decision to make my first Reformation attempt in Leipzig. I was learning as I should have targeted Brandenburg first because if I could have won that space over, I would get to place the Protestant land unit there adding a bonus die to each of my attempts for the adjacent spots. Oh well. Chalk that up to inexperience and excitement to simply do something as we had spent considerable time setting up the game and reviewing the rules.

So, I added up my dice and came up with 4 dice (1 die for Wittenberg being under Protestant religious influence, 1 die for an adjacent Reformer in Luther, 1 die for an adjacent Protestant land unit and one bonus die from the card). The Papal player would be rolling 3 dice, 1 for each adjacent Catholic space of Erfurt, Prague and Nuremburg. Not bad odds having a 1 die advantage and being able to win all ties. Or so I thought. I rolled and to my dismay came up with a 5, 4, 1 and 1. No 6s for an automatic success. No problem. Surely he wouldn’t be able to roll a 6. Famous last words! Alexander, who normally is not known for his luck in dice rolling, rolled a 6, stopping my Reformation attempt in Leipzig, which would make each subsequent attempt that much more difficult. Ugh! 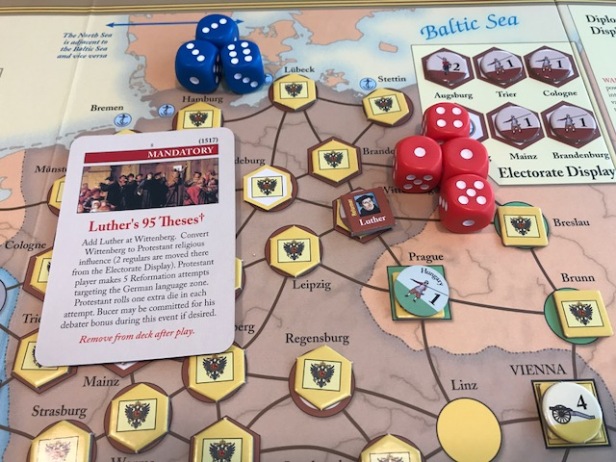 I was not daunted though and pressed on with mixed results as only 2 of my remaining attempts were successful, converting Magdeburg and Brandenburg. Not a great start for the Reformation and unfortunately one that I would never fully recover from.

One other modifier that can be used is the Reformer Bucer who is available to the Protestant player at the start of Turn 1. He can add a +1 die modifier to Reformation attempts within 2 spaces of Strasburg, which is located at the very bottom left of the picture above. I never really was able to take advantage of his benefit as I never really made it that far south into the German language zone. These Reformers all have interesting, if not very specific, abilities that if planned for and used well, can be the difference in seeing the wave of reform spread throughout Germany.

I know that was rather long but this game is deep and can be very complex as there are many conditional rules that only come up under certain circumstances. This game is great fun though and I will continue discussing some of the more religious centric actions that we took during our play of the 2-player variant. In Action Point 2, we will take a look at the special Turn 1 only phase called the Diet of Worms (“diet” meaning a formal meeting, not a weight loss plan, and Worms referring to a city located to the south of Frankfurt).

19 thoughts on “Here I Stand: Wars of the Reformation from GMT Games – Action Point 1”