Previous to this Action Point, we have covered two major phases in the 2-player variant game of Here I Stand from GMT Games. In Action Point 1, we talked about the specifics of the Diplomacy Deck as well as a look at the playing of the Mandatory Event card Luther’s 95 Theses and in Action Point 2 we took a look at the special Turn 1 only phase Diet of Worms. In this Action Point, we are going to examine three specific available Religious Actions, including Biblical Translations, Publishing of Treatises and Calling Theological Debates. There are more than this but these are the ones we will focus on.

A large part of the Reformation was an effort to get the written word of God into the hands of the common man so that they could read and understand the gospel. So, in Here I Stand, there is the option for the Protestant player to spend their Command Points on translating the bible into various languages, including German, French and English.

The player can spend Command Points to move the markers below shown on the Protestant player card one space per CP spent. In order to move the Bible marker though, the player must have first completed the translation of the New Testament in that language. You will also notice that at the end of the track for the New Testament translation, there is a note that reads, “Take 6 Rolls”. This is in reference to Reformation attempts in that language zone only. There are no inherent bonuses to those rolls but they are a very valuable benefit that can move forward the process of the Reformation in each of the three language zones. 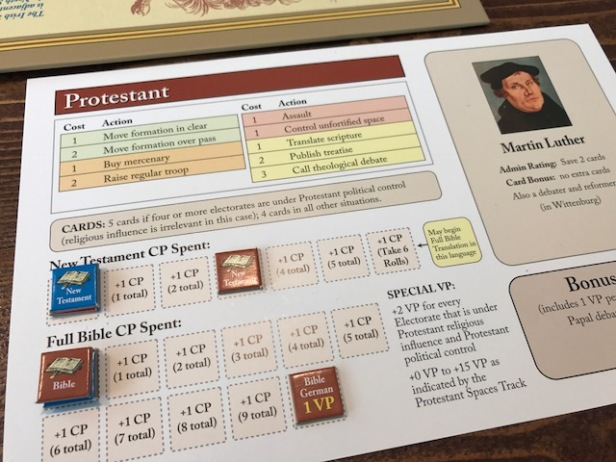 I love that this element was included in the game, as the entire reformation started with a treatise being nailed to the door of the Castle Church in Wittenberg. As an option for the Protestant player, they can spend 2 CP to Publish a Treatise. The Protestant player then gets to take 2 Reformation attempts in a single language zone but with no additional bonuses other than those granted for the presence of a Reformer, adjacency of each of Protestant religious influence space and land units. Pretty simple but very important! I found myself spending 2-4 of my CPs from cards each turn to do 1 or 2 of these as it is so very important to convert those spaces. In fact, for each space the Protestant player controls, it effectively takes away victory points from the Papal player (see the photo below of the Religious Struggle Card).

Now to the fun stuff! I loved the Theological Debate action as it really was dangerous, for both sides, but also very thematic. Both the Protestant player and Papal player can spend 3 CPs to Call a Theological Debate in any one of the three language zones. The key here is that if you have committed all of your debaters in that zone for their abilities or for other debates, you won’t be able to initiate this action so you have to plan carefully, as early in the game, you only have access to a few debaters and their abilities are really good and tempting to use in other areas.

These debates are a little less predictable than using Reformation attempts, but offers some additional benefits of their own, such as bonus victory points for disgracing enemy debaters. But you must keep in mind that you also have a risk as the Papal debaters can cause you to be burned at the stake. This can be very risky but definitely have some reward!

The process is pretty simple and follows the following procedure:

Now comes the good part. The winning side, or the side with more hits, takes the difference and can do several things. They can flip the difference of spaces to their side for religious influence as if they had been successful at a Reformation attempt, but they must still follow the same process so these spaces have to be adjacent to another similar religious influence space or contain a Reformer and must be in the same language zone. But, if they have more to turn over than they can in that language zone, they can jump to other language zones.

In our play, I was able as the Protestants to disgrace one debater and gain only 1VP. Fun part of the game that is a little bit risky as those dice can be fickle.

The final point I want to bring up is the Victory Check and Victory Points. Pretty simple for our 2-player variant game. We were concerned with the number of spaces under Protestant religious influence vs. those under Catholic (Papal) religious influence. To that number, we added special bonus victory points, such as for my translation of the Bible in German (+1VP) and my disgrace of the Papal debater (+1VP). As you can see from the Religious Struggle Card below, each space that the Protestants add to their total, by having a successful Reformation attempt, doesn’t necessarily translate into direct victory points. A VP change really only happens with every fourth space. For example, notice the change from 3 spaces to 4 spaces (reduced the Papal VP by 1 from 15 to 14 and increased the Protestant VP by 1 from 0 to 1). You have to stay on top of that track because you have to know where you are. Our game actually ended in a Domination Victory after Turn 4 for the Papal player because Alexander had 19 VP to my 10, which was at least 8 greater. Had I been paying a little more attention to the track, I could have added at least a few VPs from additional spaces as well as possibly finishing the French Bible translation was I was only a few spaces away from the Bonus +1VP and would have possibly added a few more spaces to my total. Great game that I really enjoyed and really look forward to playing with a group as a 6-player game to experience the true Here I Stand full experience. 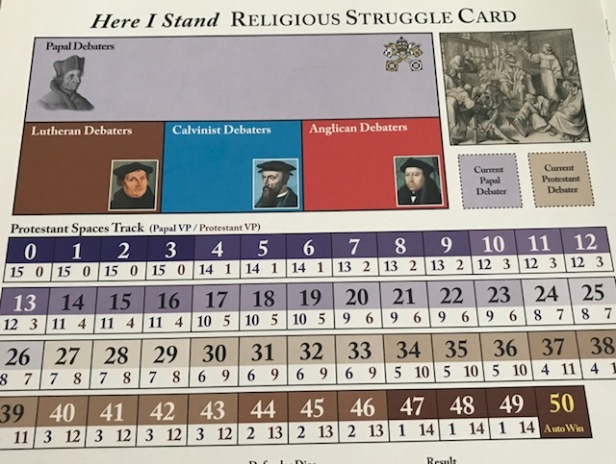 In our next and final Action Point for Here I Stand, I want to take a look at the Schmalkaldic League event card and how it would have changed our game moving forward if it hadn’t ended prematurely in Turn 4.

6 thoughts on “Here I Stand: Wars of the Reformation from GMT Games – Action Point 3”