I love tactical games, and recently wrote a post with my Best 3 Games…with Tactical Combat! I took quite a bit of heat for my choices but, as I have always said in these posts, these are the games that we have played and liked and feel implement the focused on element well. Also, to each his own! So, in this post I would like to take a look at the games that use tactical miniatures the best in their design. I have played quite a few of these type games, but know that I haven’t played all that are out there. For example, I haven’t played Star Wars: Armada, but have played both Star Wars: X-Wing and Star Wars: Imperial Assault, which I really like a lot. I haven’t played Descent or Arcadia Quest but have played Masmorra: Dungeons of Arcadia. What I look for in a good tactical miniatures game is great implementation of the tactical elements available to the players in battle as well as great miniatures, of course. Do I have a lot of differing ability choices that I can use when needed? Do the rules take into account various elements that are common in tactical games such as line of sight, cover, various types of movement options that give advantage or make it tough on your opponent?, etc. With that preface, here are my Best 3 Games with…Tactical Miniatures!

Conan, designed by Frédéric Henry, published by Monolith Editions and based on the Conan universe created by Robert E. Howard is a scenario-based semi-cooperative asymmetric miniatures board game. One player is the Overlord, who is trying to stop the heroes, and the other players (1 to 4) play Conan and his various companions, including Shevatas the thief, Hadrathus the Priest/Sorcerer, Belit the pirate queen and Valeria the warrior.

Each game is a scenario, played on a map. There are several maps on double sided game boards and each map can have several scenarios set on it. The game plays fairly quickly, usually in 60-90 minutes, although set up and getting the unique rules of the scenario straight can be a bit of a bear. It’s possible to play several scenarios linked up into a sort of mini campaign, but you can also play each scenario individually. The base game does include a dozen playable scenarios for various player counts.

I love the tactical puzzle that Conan presents with each play. Each scenario has several benefits built in for both the Overlord, and for the heroes, and each must find that advantage and utilize it in order to do well. In some scenarios, there are a glut of minions that can be used to slow the characters down, while in others, there are a few powerful minions that can wreak havoc if used properly (I personally love the Giant Snake). All in all, this game is about tactics, and if players or the Overlord don’t figure that out, the true fun of the game cannot be realized. The rulebook was not done very well, mainly due to translation from French to English but the rest of the game is very solid and my group has enjoyed hours and hours of play. Plus, the miniatures are just amazing! 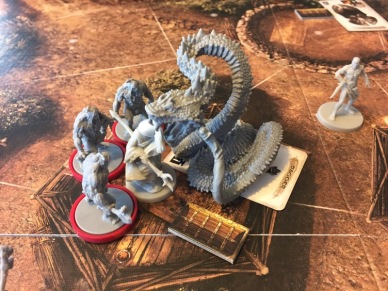 Star Wars: Imperial Assault is a strategy board game with tactical combat and scenario based missions, in the setting of the Star Wars universe. And really, who doesn’t love Star Wars? The really interesting element of this game, and the reason that it is #2 on this list, is that the game has two different modes. One is a skirmish mode where you and another player build your forces and attack each other fighting over the control of various predetermined objectives. And two, in my opinion the better of the two options, is the campaign game where one player plays the role of the Empire and sends troops against the Rebel player, or players, as they work to complete various missions like destroying a shield generator or taking out a communications satellite array prior to an invasion. As the campaign moves along, players will gain new skills and abilities that can be used, which I always love as you are able to build toward something. My only complaint is that once you have played a specific mission, you generally know where the secrets are and replayablity is lessened. This can be managed though as a group that understands the game well, can kind of rearrange the scenario a little, taking some liberties to change things up a bit, so that there are still some surprises. Overall, the system is really addictive and extremely fun to play. I always say when done with a mission, can we do the next one? Plus, just look at those minis. I love the AT-ST!

Star Wars: X-Wing Miniatures Game allows players to control either the forces of the Rebellion, including X-Wings, A-Wings, B-Wings, etc. or the forces of the Empire and their horde of Tie Fighters, including Bombers, Interceptors, etc. The game is a miniatures game that is very easy to learn, clean and with little unnecessary or distracting chrome, but at the same time, the games are engaging, fast paced, and the combat is at times really brutal. The appeal of this game to me is the fantastic miniatures, which are pre-painted, and the squad building element. I have enjoyed experimenting with different set ups to try and outwit my opponent before the game even starts. The game uses a point buy system and typically a 100 point game will consist of from 2-7 ships, and very rarely more than that, as well as adding in a couple of the pilot upgrade cards. The game has a lot of depth to strategy and tactics for a player to go as deep into this game as they so desire, but you don’t have to in order to have fun.

My favorite part is the various abilities and actions that you can use in your dogfights. Each ship type has its own pilots dial, which players use to secretly choose several actions prior to the start of the turn, including your speed and a particular maneuver each turn. After players are finished with planning maneuvers, each player then reveals their ship’s dials and then proceeds to take the actions that were chosen, starting with the lowest skilled pilot. Sometimes your chosen actions work to your advantage and sometimes they end in an explosion or with you facing the wrong direction with a Tie Fighter in hot pursuit. But, that is the really fun part; the chaos inherent with the dogfighting. The game also has a multitude of expansions, which I don’t know are totally necessary, because the base game was fun enough for me, but will add a lot of variety and give you more ships in the end, which is never a bad thing. 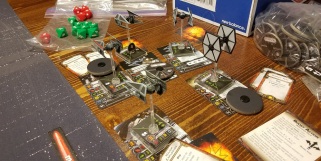 Thanks for reading my list of the Best 3 Games with…Tactical Miniatures! I want to know your thoughts so please leave a comment and let me know that I am crazy. I love to hear from our readers as it always opens up my horizons to new games that I have not had a chance to try yet. In addition to my three games identified above, I really have had a good experience with Time of Legends: Joan of Arc from Mythic Games, which is a new game just off Kickstarter that I played at Gen Con, Zombicide: Black Plague (I really prefer the fantasy zombie theme to a more traditional one) from CMON Games, Giant Killer Robots: Heavy Hitters from Weta Workshop, another new Kickstarter that I played at Gen Con, and Dark Souls from Steamforged Games.

I also would love to get into some wargame miniature skirmish games, such as Wings of Glory, Axis & Allies Miniatures and even Flames of War: Open Fire! (Alexander owns the starter set and is currently in the process of painting the minis so that we can play). The only thing that has held me back is generally the cost commitment as the games always have the next new and exciting expansion being released and it can be very difficult to keep up.