Time of Legends: Joan of Arc from Mythic Games is set during the 100 Years War, which was a protracted war between France and England lasting from 1337 to 1453, over who would ultimately sit on the throne of France. The game takes a look at this conflict and adds in story elements dealing with various legends and myths that were commonly believed at that time. These myths and legends included religious centric beliefs in a literal war between demons and angels for the souls of mankind as well as the mysterious and mythological world of werewolves and even dragons. When we received a description of the game from the Mythic Games staff member, he emphasized that they have done their research using clergy’s diaries, letters to and from peasants and kings and other sources to come up with the legends that people believed in at that time and then used those as a basis for the various scenarios. The scenario that we would play during the demo was a hunt for a werewolf hidden amongst villagers of a small French town. 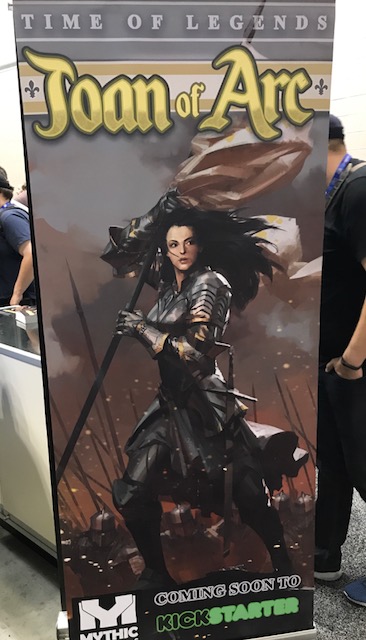 What is Time of Legends: Joan of Arc about? It is a story-driven board game that uses miniatures and 3D scenery, including these really cool buildings and trees, to create a very cool and immersive environment where players will have to use their limited actions and resources to investigate the situation, find the evil and destroy it before they triumph. The mechanics of the game uses cards to determine what resources are available for players as well as provides alternative actions to turn some resources into others, etc. 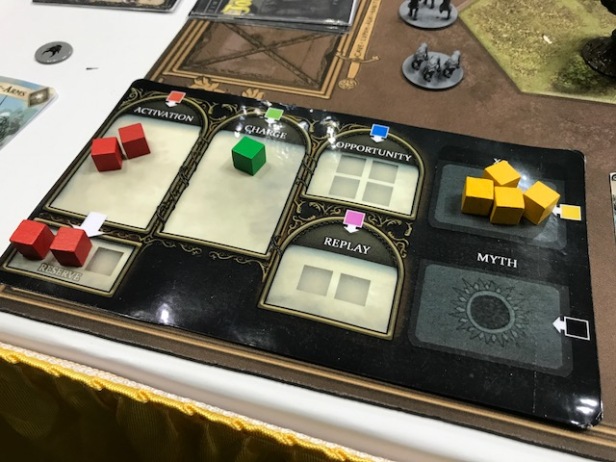 First off, the miniatures are absolutely gorgeous. The scale of the minis was a little surprising to me as I sat down at the demo table as they use a 15 mm size. The minis are not short on detail though, as even at this small scale, there is a lot to like in the sculpts. I did really like the difference in scale of the large monsters, such as the werewolf, as it really enforced that monstrous aspect. I didn’t get a picture, and I am kicking myself, but they had this amazing Dragon mini in a case that was simply EPIC and if used in a scenario will simply be amazing!

The size of the minis was deliberate as this allows for a lot of them to fit into the hex tiles that are used to form the board itself, another great feature that will allow for many different plays using different scenarios as well as for those that like to create their own custom scenarios. In the demo, I was able to use several different miniatures, including the aforementioned Men-At-Arms, Peasants as well as Pikemen, a Priest and my Hero, who sits a top a white charger ready to force the issue with a brave headlong charge into battle. 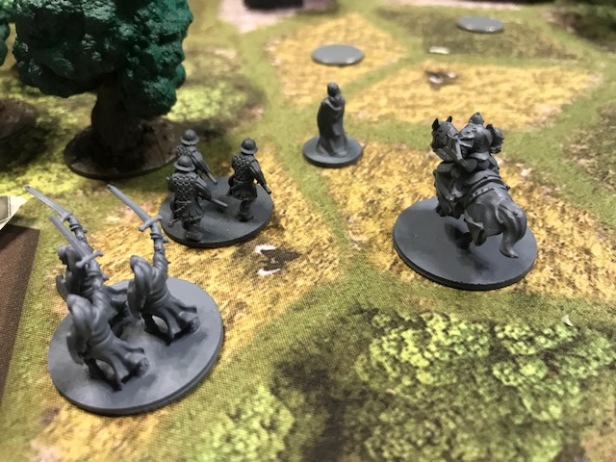 The game also comes with this really great scenery that I already mentioned that is just awesome and really lends a feel of realism to the situation. From the finely detailed homes (notice the chimneys, textured shingles and detail on the sides as you can actually see the beams used as support among the stucco) and the amazing cathedral, to the beautifully sculpted trees and monuments, such as the post shown to the left of the picture, the devil is definitely in the details of this game. I enjoy games that immerse you in the theme and Time of Legends does this admirably with fantastic miniatures and awesome looking hex tiles as well with beautiful illustrated ground cover, including grass, scrub brush and cobblestone. 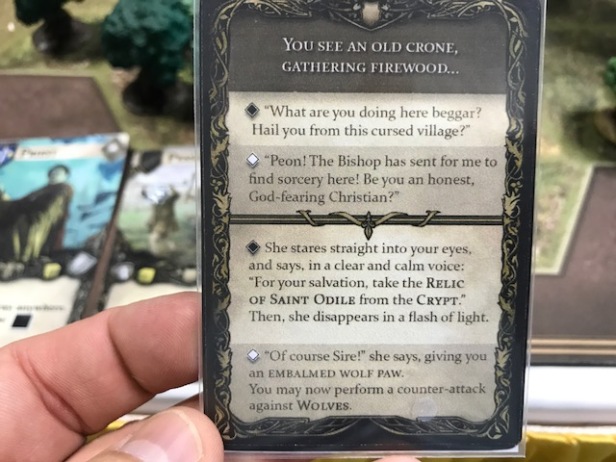 We didn’t get to experience this part of the game a lot but it includes story or RPG style encounters that players can have with characters on the board throughout a game. For example, if you look at the card above, this was an encounter my pieces had with an old crone that was seen gathering firewood in the forest that was just on the outskirts of the village. As I moved my pieces into the space where her miniature was located, I was given the choice of how to interact with her. I chose the white response, which wasn’t a very nice way to hail any traveler, but was a little less mean than the other option. As you can see on the card, she then responded in kind and offered to give me an Embalmed Wolf Paw in the form of a red token that I could keep and use to perform a counter-attack against Wolves later in the scenario. The other response was a useful piece of information as well as it tells you where a relic is hidden and now all you have to do it ask around as to where the Crypt is located. I really liked this part of the game and would love to have been able to look at a few of the other cards during the demo but this was our only such encounter.

Combat in the game is very simple and revolves around each specific unit having a different set of abilities and using a different number of dice in combat and defense.

As you can see from the picture of my hero above, when not upgraded, his attack power allows him to roll a red die and a yellow die. These die are different and offer greater chances of hitting based on the number of hit symbols that they have. As the character is upgraded, you can see that the yellow die changes to a red die, which is an improved attack. You will also notice that the character has a defensive symbol on the right side of the card by the shield which shows that you will roll a green die hoping for shield symbols which will block damage to you. Very simple method of combat and I will say that our dice didn’t roll very well as I only hit 2 times during my entire demo.

We really enjoyed our demo play of Time of Legends: Joan of Arc at Gen Con and can see that this game offers some really interesting gameplay elements in addition to the beautiful sculpted minis, buildings and terrain tiles. I will say that the demo going on next to us was a different scenario that seemed be more tactical and combat related than ours as one player was trying to attack an armored caravan while the other was trying to defend it, so there appears to be various types of scenarios.

I really am kicking myself that I didn’t get a picture of the dragon mini as it was truly epic. Here is a picture of a small card they were handing out at the table that shows some of the different types of minis (notice the large Angel featured prominently in the center of the card) and it shows the buildings and some of the minis painted and they are stunning. 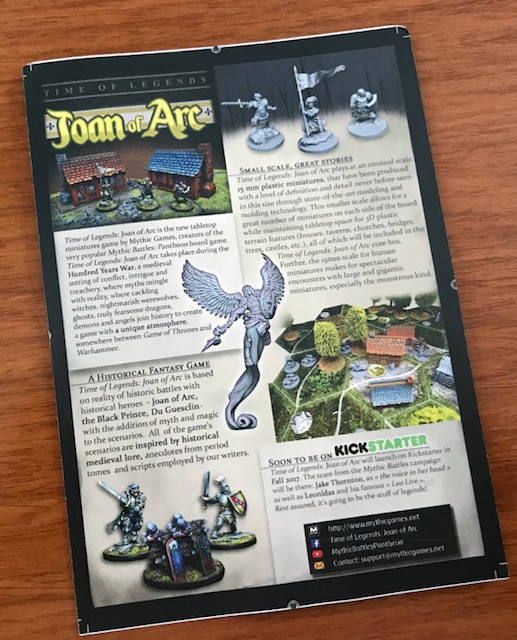 The game is set to launch on Kickstarter during the fall of 2017 and I for one am considering buying in.