I used to play Monsterpocalypse from Privateer Press, but when that game went the way of the Dodo I had to give it up. I had only one person to play with regularly, and I then moved to the States so I lost even that. On top of it, shipping all of that would have been more effort than it’s worth. So when Weta Workshop announced that they were branching out from special effects on movie sets and making a giant robot fighting game, I was instantly sold.

Giant fighting robot games invariably fall into one of two categories. The first being alternate history Mech wargames, or pulpy/comicbook-esque smash up games that are larger than life. GKR falls into the second category. It’s unapologetically high octane and the game looks fantastic on the table. We had to sign up for a demo of the game because it was in such popular demand. As we sat down in the booth, the first thing that I noticed was the box size for the base game. When this thing ships over the winter I’m going to have to go house hunting for more square footage.

The size of the box seemed to be an indication of how the rest of the game would go. The Heavy Hitter miniatures are huge, and really great looking molds. The buildings, which are cardboard with plastic bases and toppers, are just as huge. Everything in the game screamed ‘Wooo look at me, look at how awesome I am!’, which was just fantastic. I’m not going to post that GKR has some deep, rich theme to it. This game doesn’t make any bones about what it is, a giant slugfest using huge miniatures. That being said, the corporate sponsored robot fights, the building tagging and advertising mechanics that run through the game are given more life just form the sheer table presence of this one.

The board is big, and the hexes are huge (to accommodate the ‘minis’ – come one now they’re hardly minis at that size) but you’re all right on top of each other early on. We played a 4 player game and you’re shooting each other in the very first round. Not much opportunity to be tactical or sneak around the board. The pace of a 4 player game was furious, after 4 rounds I had only 6 health left and would most definitely have been obliterated had we had time to continue. That being said, I think a 2 player game might last a bit longer and be a bit more tactical. There’s a lot you can do in this game with regards to ducking in cover, taking shots from full cover and trying to out range your opponent, just not with four Heavy Hitters on the board at the same time! 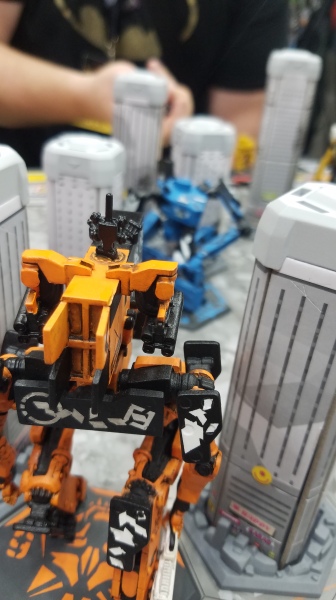 The great part is that a game of GKR will never drag on. If a player is being a whimp and hanging back out of combat (why are you even playing giant KILLER robots?) you can tag buildings with your corporate sponsor and end the game with tagging four buildings with four of your tags. That eliminates the one thing I always hated with tactical games as a kid. My oldest brother always wanted to play it out to the last man. So I’d spend thirty minutes being competitive and then 2 hours losing. I didn’t know conceding was a thing! GKR allows a game to have a defined end that doesn’t have to be I killed you to the Nth degree over the course of an hour.

I had a total blast with the card decks. They’re unique for each Heavy Hitter and deck customization is a huge deal. The base game comes with a crazy amount of cards for each HH but you only use a small fraction of them in your game. The comic style artwork and the sound effects are really hard to not say out loud when you drop lasers on your opponents. The cards seemed a little busy at first, but once you play a round they become fairly intuitive. You have a weapon type, an energy cost to use it, a range value, and a damage value. You chuck dice and hope you hit, the target gets an armour save against each point of damage and then you rinse and repeat. 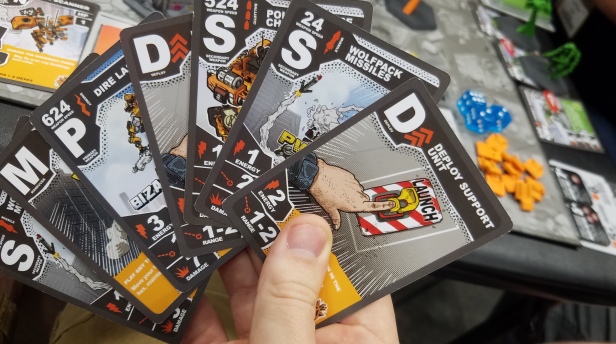 Subtlety might not seem apparent in GKR because, well, you’re a building sized robot armed with more missiles than a despotic totalitarian country. But really there’s at least some level of thinking that you can put into this game. There’s a fire order priority which is as simple as a number printed in the top corner of each card. Fire resolution happens in descending order. Very fast (and usually less powerful) weapons fire first, and then massive primary weapons fire last.

Each Heavy Hitter also has 3 support units; recon, repair and combat. Your recon units have a high initiative and will often go first as well. Units can be used to spot other Heavy Hitters around corners for indirect missile attacks. That means you have to keep your units alive through the entire affair in order to get your missiles to be able to swerve around that corner accurately in order to hit their target. I really enjoyed the priority fire, although sometimes it was hard to keep track of on that cramped table with four of us. If I’m playing at home, I’ll be lining them up off board and just going down the line, nice and easy.

All in all I couldn’t be happier with GKR: Heavy Hitters. I backed this one on Kickstarter and I’m waiting with baited breath for December to arrive. I saw parts of the Urban Wasteland expansion on display with the plastic buildings and stickers and they look great. Although that in turn is even more box that I somehow have to find space for! This game is just fun. Nothing more, nothing less. It’s got that trashy feel to it that sits perfectly as you run across the map blowing the hell out of each other.

Great job Weta Workshop! I didn’t know how badly I missed have a giant city smashing game until I played this!