Earlier this month in our Wargame Watch segment, I highlighted two smaller games from High Flying Dice Games including Kekionga!: A Dark and Bloody Battleground, 1790 and St. Clair’s Folly: The Battle of the Wabash River, 1791. Both of these games focus on early battles between US forces and various Native American tribes in the area of the Old Northwest Territory, which includes the present day states of Ohio, Indiana (my home), Illinois, Michigan and Wisconsin. This war was characterized by massacres and atrocities, which seemed to follow one upon the other, and in 1790 the new US Government authorized its first war against the Native Americans for control of the region. In our first interview with designer Paul Rohrbaugh, we focused on the first of these battles, Kekionga!: A Dark and Bloody Battleground, 1790. At Kekionga, a small force of US Regulars and Militia under the command of General Harmer gathered at Cincinnati and drove on the Miami’s main settlement of Kekionga and were soundly defeated by the Miami at the Maumee River. Alarmed, the US Congress and President Washington authorized the mobilization of an even larger force, this time to be led by the Territory’s first Governor and General of the Army, Arthur St. Clair. This would be the first full scale conflict waged by the new nation, and President Washington was very much concerned about the risks such an undertaking involved. In the second game in the Battles of the Old Northwest Territory Series, Paul Rohrbaugh takes us into yet another defeat of the Americans at the hands of a larger combined force made up of warriors from multiple tribes. I really appreciate the fact that Paul Rohrbaugh is interested in this time period in our early American history and has devoted his time to bringing it to life for us and I also am grateful that he has taken the time to answer my questions about the games.

Grant: What event inspired this entry into the Battles of the Old Northwest Series?

Paul: I can’t really say any one event. My undergraduate classes in history triggered an interest in local history that has lasted to this day. I’ve visited all of these battlefields over the years, and have written and presented on many local historical events, including the 1790-95 war for the Old Northwest many times. After completing my game on Kekionga, which is the first entry in the Battles of the Old Northwest Series, the next game needed to be The Battle of the Wabash River fought on November 4, 1791.

Grant: Is it your plan to have each game in the series share the same basic rules?

Paul: Yes, they will all share the common rules/design, as well as format, which includes one 11 by 17 inch map along with 70 to 100 counters. [For more information on the basic rules of the series, see the previous interview covering Kekionga!: A Dark and Bloody Battleground.]

Grant: Will each of the entries in the series have some form of game specific rules?

Paul: Absolutely, just as they all have their distinct counters/OOB and map.

Grant: Along those lines, I noticed that St. Clair’s Folly has some new unit types introduced. How do the Dragoons work?

Paul: US Dragoons are cavalry armed with pistols, muskets and swords. These units can perform move and Assault Combat activations (infantry type units can only do one of those at a time). These units can be quite powerful, but the Native American player gets double the Victory Point (VP) award by inflicting a step loss or eliminating a Dragoon unit. 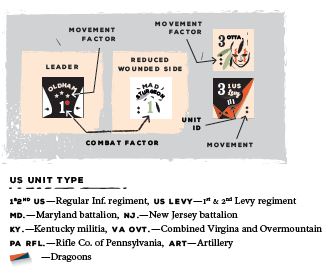 Paul: Nils depicted these with rectangular icons with a diagonal slash (similar to the icons used on contemporary maps of the battles).

Grant: Why did you choose to have the US player have to roll dice to see if units are reduced at set-up? Is this because of ongoing fighting previous to the battle?

Paul: I think what you’re referring to is the US player rolling dice to determine how many units will be reduced at-start, from which 1 step Outpost units will be set up. The US deployed small squad-sized outposts to serve as a sort of “trip wire” advance guard beyond the main encampment. The number of Outposts was varied and not consistent about the US encampment, and the variable number of these units captures well the bad position that St. Clair’s force found itself in here along the Wabash River.

Grant: Why does the Native American player start with a number of activations equal to 3 dice rolls? What did this replicate from history?

Paul: This rule allows the Native American player to start the game with the first set of activations. This captures the near total surprise the Native American forces were able to achieve against the US Army. It will take a skilled and even somewhat lucky US player to weather this initial storm and then snatch victory from the jaws of defeat.

Grant: Why do Native American units have to set up within a certain distance from the various colored stripes? Where did this idea come from and what does it replicate from the historical battle? 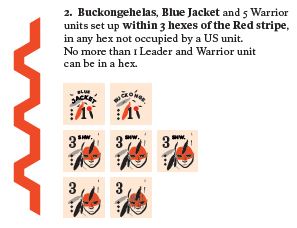 Paul: The Native American “army” was composed of many factions, tribes and nations. Command and control were real issues for them, especially once battle was joined. Their War Chiefs deployed their army into three wings, left right and base, and that player will likely need to keep those formations intact and working together to win the game in this very tangled and broken terrain.  This idea came from the sources (listed in the game’s bibliography as well as the Against the Odds magazine that published my Dark and Bloody Ground game and article).

Grant: Tell us a little about some of the personalities involved on both sides. Who is Mad Sturgeon? Buckongehelas and Simon Girty?

Paul: These were some of the many important and colorful leaders of the Native Americans. Mad Sturgeon was a Chief of the Nustocomeg tribe of the Potowatomi, and served with Tecumseh clear up to the Battle of the Thames. Buckongehelas was a famous Chief of the Lenape, and also fought in many battles alongside Tecumseh and Little Turtle (famous Chief of the Miami). Simon Girty was a former US citizen that “went native” and fought alongside the native inhabitants for their lands and rights. When I was growing up, if we heard/learned anything at all about Simon Girty, it was overwhelmingly negative and he was often described as a terrorist. As one reads more about him and this history in general, Voltaire’s quip that “given time, all wars become civil wars” comes often to mind when I read about Simon Girty. He eventually ended up living in Canada.

Grant: What tribes are represented in the battle?

Paul: In St. Clair’s Folly there are quite a few, as this was a major battle. The Miami, Shawnee, Potowatomi, Ottowa, Ojibwa, Delaware, Mingo, Wyandot and Cherokee are all there.

Grant: I noticed in the setup, that Little Turtle doesn’t show up to the battle 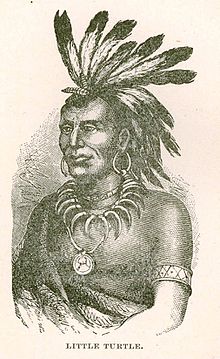 until Round 2. Why is this?

Paul: Little Turtle was the overall commander of the Native American force, and as such in command of their small reserve. He also played a key role in rallying and redirecting warriors where they were most needed in the growing battle.

Grant: What special rules are included in the design?

Paul: Mostly these concern the US Outposts (which allow reduced units to move in and be flipped back to full strength), and Black Snake’s (William Wells) infiltration and attempt to take out the US Artillery crews early in the battle. Others cover ammo shortages (if units are low of ammo after a roll, their CF is decreased by 1 for the remainder of the game) for Fire Combat and how long the Native American Surprise effects will last (for each round they have surprise, their Warrior units have their attack factor increased by 1).

Paul: Simply by Inflicting losses on their opponent. Leaders, artillery, regular infantry and Dragoons cost more VP when they take losses, and so this can disproportionately affect the US player.

Grant: How long does a game of St. Clair’s Folly typically take to play?

As always, thanks for your time Paul. I really appreciate the fact that you spend a lot of time on bringing these small and more obscure, but just as important and impactful, battles to us players so we can learn the history of our nation.

If you are interested in ordering a copy of St. Clair’s Folly: The Battle of the Wabash River, 1791 from High Flying Dice Games you can follow this link to order one for $11.95:  http://www.hfdgames.com/scf.html  If you want mounted counters, you will have to add $5.00.

6 thoughts on “Interview with Paul Rohrbaugh Designer of St. Clair’s Folly: The Battle of the Wabash River, 1791 from High Flying Dice Games”