Legion Wargames’ most recent release is Redvers’ Reverse, the battle of Colenso 1889 – designed by Geoff Noble. During the furious second Boer War the British Empire was caught up in a new kind of warfare that they were wholly unprepared. The Boers were using guerilla hit-and-run tactics in order to strike vital positions, or to disrupt supply lines and use their local knowledge of terrain, etc. to their advantage. They would then melt into the land and subsist off the support of local sympathizers, and in doing so forgo the need for a fully organized army, and the support structure required by one. The Boers were mobile, and tenacious and as is often the case, British commanders were very slow to react to this new type of conflict.

This game has fantastic pieces . You can go and check out the unboxing video for a closer look at the chits themselves as well as everything else in the box. Something I noticed with this game, that was much less of an issue with B-29 Superfortress, was that the counters were more difficult to pull apart from each other. The chits kind of pop off the ‘sprue’ easily in rows, but pulling those big chits apart required both some extra strength and a little bit more care because I was a little worried that the extra force might damage the counters. After clipping them though, you can’t even tell and the printing on them is just outstanding. Solitaire games aren’t for everyone but when they’re good eye-candy that’s a big plus.

The map is top notch, and the board has play sequences and attack priorites and sequences printed on it, again, something that I really appreciate in a solitaire game. This helps me to learn the game, and learn it quickly. Because after the first full round of reading the rule book I was able to skip large parts of referencing the book, or at least only taking cursory glances at it.

I’ll be honest, I had no idea what the Battle of Colenso was, but after only the first play of this I felt like a well versed historian. The game includes a lot of history in the back of the rulebook for the uninitiated but the game really does simulate the conditions and the difficulty the British forces faced.

Probably my single favourite aspect of this game is the order system. Wow! What a great system, especially in a solitaire format. In a two player game, I think a system like this might get quite ‘swingy’ which I wouldn’t like,  but for this game it’s perfect. There’s a few steps involved, but before your troops can do anything you have to choose what you want them to do. You place planned objective markers into spaces you’d like them to move to, which sounds simple enough, but they didn’t have radios back then, so giving orders took time. You then roll on a table for each planned objective [which is Buller planning it out at HQ] to see if the orders are correctly relayed to the Regiment commanders in a timely manner. This table takes distance into account, so the further away you are from HQ the longer the lag time is in receiving orders. And then comes my favourite part of all. Each of the Regiment [or artillery section/battery] commanders has a rating of A-C which relates to their temperament as a leader, being headstrong, normal, or cautious. So when your commanders receive their orders you then roll to see if the regiment commanders actually obey the orders, or if they decide to delay due to caution, or charge straight into battle.

I am so grateful to Geoff Noble, the designer, for this mechanic. So many games at this level or higher are more on a strategic basis, and the games are about maneuvering and positioning. Redvers’ Reverse is still absolutely that, but has this added layer of personality to it, which brings the commanders to life, and makes you think twice about making Commander X lead the charge over commander Y because X may bottle out and leave Y in a terrible position. Seriously, it’s so great!

Is this for me?

I figure if you’re still reading this then this game at least peaks some interest in you. Currently [12/12/2016] Redvers’ Reverse is still available at the pre-order price of $48, which is a great price for this game. The pieces are gorgeous, and there’s just so much to play around with in this game. Thematically I had almost zero knowledge going in to this game, and the Boer Wars are still something I know very little about, but that doesn’t deter me in the least from enjoying this game. You have to break the enemy lines and punch through to relieve the siege of Ladysmith, and the enemy is dug in, and very hard to dislodge. 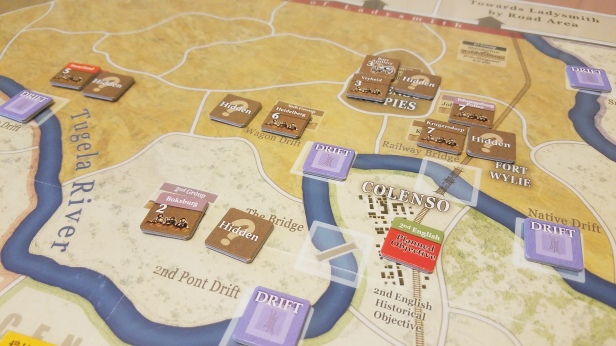 There’s enough hidden elements [even trying to cross the river] and radomly drawn events to keep you on your toes at all times, and aside from that there’s a truck load of variables you can alter. The game comes with a huge variety of ‘what ifs’ you can add at your leisure, to make things harder or easier depending, but as an extra added step of effort on the part of the design team; these variables have been fully balanced. Each event/scenario/condition has been given a +/- value and as long as you come out at Zero you’ll have a balanced game experience, so maybe crossing the river can be made easier, but you’ll then have to fight a more heavily armed enemy. This makes the game very much replayable for those wanting to explore the game and stretch it to the limits. And I love a game that I can work with to see what it can do.

So that’s a brief introduction of an unsung hero. Watch out for more detailed in depth looks/AARs for this one later.