My first ever Battle of Blenheim game! A period of history I knew nothing about. I knew Blenheim was a famous battle, but Blenheim to me was always associated with the Bristol Blenheim, a WWII RAF light bomber/nightfighter. Indeed the Bristol Blenheim was named after the battle fought by the Duke of Marlborough in Bavaria, but I’d never really taken the time to research that battle.

Enter Steve Pole. His game brings that battle to life with a system that is both intriguing and innovative. Published by Legion Wargames I was delighted to learn some new history as well as a new system.

The Battle of Blenheim

This is a two player game where Franco-Bavarian forces square up against the Duke of Marlborough and Prince Eugene of Savoy. The battle was a clash of 100,000 men and 150 guns in the marshy lowlands on the banks of the Danube. Combined arms are a huge key to this battle; when to charge the cavalry, counter charge, wheel your troops and position your guns. One of the very best parts of this game is that you can do all of this, whilst maintaining battles lines and formations in a very simple, and uncluttered way.

So many games in the Age of Enlightenment, and even into the Napoleonic era are fraught with formation markers, status conditions and a million rules about how and when you can march based on your current formation. Steve Pole has created the Seven Hex System, which essentially eliminates the need for any of that. On first opening up the game the most noticeable thing is the map, which has an over superimposed but it’s not your traditional hexes or squares.

As you can see in the picture the main over lay is made up of 18 sided polygons that would be seven normal hexes. Indeed, each of these polygons has small markings inside them dividing each segment into those hexes. In this game each space has a stacking limit of two, with Guns and Leaders free stacking. Looking at the picture above, it might seem the battle lines are fairly sparse and all over the place. The seven hex system removes the need for dozens of formation counters but using the ‘hexes’ within each space to denote the units’ positions. A unit in the centre hex is effectively in column formation, and is more susceptible to cavalry and other attacks. Whereas the outside ring of hexes denote a fighting formation. Which hex you choose is important however as flanking in this game is critical and catching units ‘in line formation’ from behind can be deadly. 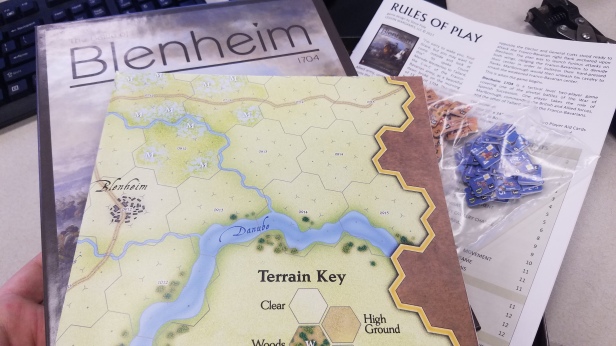 As mentioned above, you can only move from area to area by being in the centre hex of an area. Moving from centre to an outside hex, or vice versa, is an indication of shifting formations from column to line. It can feel a little sluggish at times moving and leaving yourself vulnerable in column, but understanding that the enemy also faces those same challenges is a key part of this game. You have to pick when you change formations to move very carefully, it’s also a risky bluff to try and move enemy formations out of position or to wheel them around as they react to your moves. All in all, it’s a fascinating experience, and again entirely clutter free. 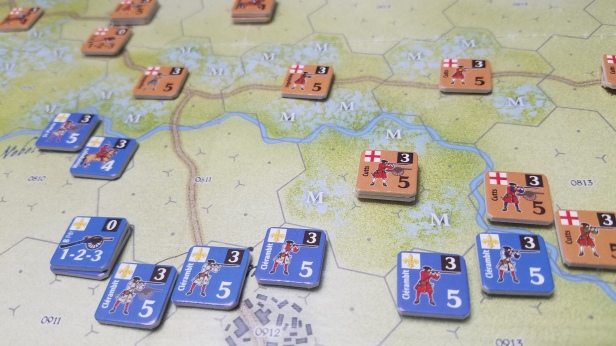 Combat involves a dice roll plus a lot of modifiers, which include your combat strength, combined arms, status, positioning and other factors. Like I said, there’s a few. But the play aid cards are good and the rules pretty clear about the specifics so you just run down the line and add them up. This is a game where you may want a pencil and paper handy just to jot down your totals, especially solo. I don’t know about you but when I calculate an attackers’ modifier total I forget it half the time whilst calculating the defender’s total. Jotting it down just keeps it going at a good clip. Combining infantry and cavalry charges is excellent, and outflanking formations gives you devastating combat odds. 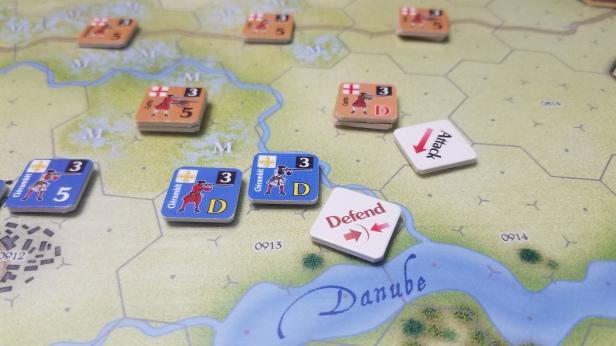 But all of this, as cool as it is, is then dependent on your capacity to issue orders in the chaos of battle, and for those orders to be understood and executed. Legion Wargames have a few titles out there where issuing an order is half the battle – go and check out Redvers’ Reverse for example, a Boer War game they put out a couple of years back, it has this whole timing mechanic and the stubbornness and pride and courage of a commander factors into their capacity to execute an order.

The Battle of Blenheim uses a simple dice rolling system, modified negatively by the number of orders you have previously issued. So there are only a finite number of orders to issue each turn. You must prioritize the most important things first, and then execute those, then hopefully you can bring up the rear sufficiently.

I enjoy this as it helps to keep this a good solo game, and the lack of total control means you get some very unexpected and hairy situations that you wouldn’t normally put yourself in; and that’s good drama. And dammit, if I don’t love me some drama in a wargame. When every dice roll matters, a game is usually pretty fun, at worst it’s engaging!

Combat results are typically bloody, and include crippling retreats on bad rolls. Rallying troops in this game is tough, as leaders are a must to have any realistic chance. So understand that formations will break and the battles will swirl, but this game is about trying to hang on to the white knuckled ride of command and hope your troops listen and perform admirably.

Is this game for me?

Sure, why not! I say that because this is an excellent solitaire experience, and also a game that tried something very new. How many games out there rehash the same battles and tweak the same systems? Well, The Battle of Blenheim is an entirely new system, and it’s always refreshing to see a designer break some new ground. Is this the flashiest topic of all time? No. But please don’t let that turn you off from trying something new. And if it does, at least wait a few months because Steve is currently working on a few more titles in the series and the next one is a Two Pack from Legion Wargames that includes Borodino 1812, and Kliszow 1702. I tell you that (hopefully it’s not a secret..) because these two battles, over one hundred years apart, can use this same system. These two also are a step up in the complexity, with more in the way of unit compositions and special units and weapons. So there’s plenty coming for this system, but Blenheim is the perfect jumping off point as it’s the Seven Hex System in it’s simplest form.

The Battle of Blenheim is dressed to the Nines and I love a game that can take a field and a swamp and make it look so nice on the table. Do yourself a solid and get a copy of this, read the rules and stick it on the table. The only part that I had to really re-read were all the modifiers and combat calculations, just to make sure I was getting the correct results. There can seem like quite a few for a single engagement, but after a couple of goes the calculations can be done in your head and aren’t very taxing.

Here is a link to the game on the Legion Wargames website: http://www.legionwargames.com/legion_blenheim.html

So there it is, as of writing this it’s still at a post CPO discounted rate, so get it whilst it’s hot!

One thought on ““But ’twas a famous victory.” – The Battle of Blenheim 1704 from Legion Wargames”