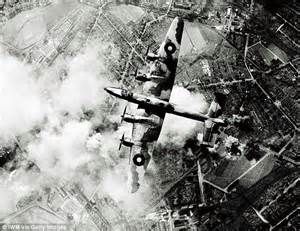 Bomber Command The Night Raids 1943-1945 is a game of the night war in the skies over the Reich during World War II. The game recreates the great RAF bombing raids against the heart of Germany and the defense of the German Luftwaffe’s night fighter arm.  This game is a follow up effort to Nightfighter (2011) by GMT Games. Based on an air combat system derived from the award-winning Downtown and The Burning Blue ‘raid-scale’ games, Bomber Command details the tactics of night fighting.

A Look at the Game

The game is designed for 2 players, with one player controlling the RAF and the other playing the Germans in their desperate attempt to protect the Reich and its industrial heartland. Strategic bombing during World War II began in September 1939 when Germany invaded Poland and the Luftwaffe began bombing cities and the civilian population in Poland in an indiscriminate aerial bombardment campaign. As the war continued to expand, bombing by both the Axis and the Allies increased significantly. In September 1940, the Luftwaffe began targeting British cities in what became known as ‘The Blitz‘. From 1942 onward, the British bombing campaign against Germany became less restrictive and increasingly targeted industrial sites and eventually, civilian areas. When the United States began flying bombing missions against Germany, it reinforced these efforts and controversial firebombings were carried out against Hamburg (1943), Dresden (1945), and other German cities.  The German player must manage flak, Himmelbett zones, Wild Boar and Tame Boar tactics while the RAF main force raids are supported by Mosquito diversions, “Gardening” operations (mining of seaways) and decoy raids. Two card decks–one for each player–are used to resolve the complex interactions of electronic countermeasures and radars, along with other operational factors such as Mahmoud patrols, Flower raids, and Beleuchter illumination units. A detailed bombing resolution system depicts the difficulties of marking targets and area bombing at night.

The game consists of two separate scenarios and players can play either.  The scenarios are as follows:

This game is fantastic but is fairly complex as there are many rules to remember and a lot of processes to follow in order to play the game.  Despite being one of the more complicated and difficult games I own, Bomber Command is a GREAT game. The game play and mechanics create a very tense play experience for both sides and kept us on the edge of our seats for the entire 2 hour play time.  The British player’s goal is to drop a payload of bombs onto the major target of his main raid which is randomly drawn at the beginning of the game.  The trick to the British player doing his job well is trying his best to outwit the German player with cleverly and unconventional plotted raids and decoys.  This means that they cannot always take the safest and most direct route to the target but must make sure to risk the dangers of spotlights, antiaircraft fire and interception and infiltration by German fighters.  In the meantime, the German player is very frantically trying to locate the main raid and destroy as many bombers as possible to lessen the impact that the bombing run will have on his cities.  This is truly a difficult and almost fruitless effort as despite his best efforts, bombs will make it to the target and will reduce their cities to heaping piles of flaming rubble.

We chose to play the Berlin scenario and I was the RAF while Alexander played as the Germans. The game starts with the RAF secretly drawing a main target city from a cup and I reached in and drew out Rostock! This goal is worth 8 VP if I can successfully drop my bombs and do enough damage.

The game starts with a weather determination which introduces clouds in various forms such as broken, clear, etc. over the various sectors of the maps giving bonuses or negatives to detection rolls.  The RAF player is hoping for clouds, while the Germans want a full moon! The RAF player then is asked to plan out the ingress and egress routes they will fly with their main bombing run as well as their various decoy mosquito raids.  I love that you not only have to plan how to get to the target, but have to figure out a way to get back safely! This is accomplished by drawing the paths on a planning sheet with a pencil (I recommend using different colored pencils as the routes will intersect and cause confusion) to take the bombers from your bases to their eventual targets.  Raids are moved secretly on the plotting map, 2 hexes per turn. Various technologies in the form of cards come into play to generate detections, with both sides selecting from a starting hand of 8 (each player has a deck of 55 cards, with some only applicable to one scenario), with which to influence the outcome of the raids and air battles as the sides come at each other.

You will want to remember several key factors as you plot out the course of your bombing runs.

What I Liked about Bomber Command

Sense of Tension – We loved that the German player was never comfortable with what was transpiring through the entire game and seemed to be filled with a sense of doom knowing that they cannot possibly stop the raids from their eventual goal of bombing their cities.  But conversely, when a Tame Boar action is able to infiltrate the bomber stream, the British player is now the one that feels helpless as his bombers are picked off like sitting ducks. The cards add an additional level of uncertainty and tension as you simply do not know if your opponent has the cards to decimate your forces or not. We found that the cards were extremely important in the individual battles and now that we are more familiar with what each card can do and how they should be used, we feel our battles will be that much more enjoyably tense and uncertain!

Components – as always GMT has done a great job on the components.  The counters are beautiful, functional and sturdy.  The cards have a plethora of historically accurate pictures of bombers, fighters, servicemen, etc. that adds a great level of authenticity to game play.  I was a little concerned with the map as it is nearly totally black (I know that this is thematic and very well done) but over time as it is folded and unfolded, it will most likely begin to whiten and not look as sharp as when it was brand new out of the box! I’d love to see a mounted map option offered as a P500.

Planning Sheets – this is by far my most favorite part of the game.  I loved the fact that I was trying to fool the German player into thinking he knew where my main raid force was at and where it was going. I tried to use various decoys, such as delayed embarkation for my various mosquito raids, crossing of flight paths, flying over certain search lights and flak emplacements, etc. in order to give him the sense that he knew where I was.  I would then totally throw in a zig zag or a quick turn to the left or right, that didn’t necessarily get me any closer to my target, but that were intended to disguise my ultimate path.

Time of Play – I loved that an individual raid takes about 2 hours to play.  It took us about 2 1/2 hours but we were learning as went along. With 2 players that are familiar with the rules, it can be done under 2 hours.

Player Downtime – While the game provides a lot of player interaction and tension with the cards and the planning, there are a couple things we didn’t necessarily like including downtime and abstraction. Like other wargames we have played, there can be considerable downtime between player turns. This is mainly due to the level of analysis and thinking about strategy especially since players are trying to figure out each other’s future movements and actions. The German player can have more downtime as the RAF player has to plan their routes at the beginning of the game and this can take a while.  I list it as a negative here, but it wasn’t that bad and will improve as we become more familiar with the rules and the strategy.

Abstraction – In wargaming, it is impossible to capture the true struggle of all elements involved in command and battle.  I know it is a necessary evil in many games to rely on charts and tables to determine losses, etc. from battle.  This is almost unavoidable.  I did find that the charts and tables in Bomber Command were well done and easy to follow.

Map –  I mentioned earlier that I had concern about the color of the map as well as its durability over its lifetime. I am not a fan of paper maps but understand not everything can have a nice and thick mounted map, especially since in Bomber Command there are two separate scenarios.

I really liked Bomber Command and we were definitely pleased with the game play, the components and the integration of the theme into the game. The tension was real between us combatants and we never felt comfortable…until the game was over! I would recommend this to anyone that enjoys games about the airwar in World War II.  Player interaction is very high, and the game plays very smoothly, although it is more complex than other games.  Definitely one that will remain in my collection and see regular play.