My brother and I have played all sorts of Collectible Card Games like Magic: The Gathering, Lord of the Rings (the one made by Decipher) and more.  I was always intimidated by those games due to needing to keep up with the latest packs and then in your spare time constructing decks out of thousands of cards to make them work well.  It was fun, but my mind never worked like that.  It was more of a chore for me to think of all the combinations and synergies of how certain cards would work together or not.  Then came Deck Building….pretty much the same thing only you are building your deck during the game itself.  I really enjoy this mechanism.  I am able to see those combinations much easier when I have a certain number of cards to choose from.  I also like in most deck building games that there is a way for you to get rid of cards that seem less useful.  I also love the different ways this could be implemented.  Co-op, versus, mixed, smaller part of a larger game, etc.  There is just so many things going for it.  So lets find out the Best 3 Games with…Deck Building! 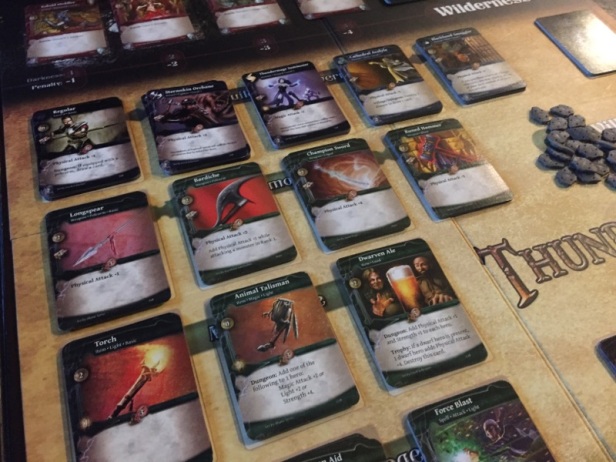 There is nothing special about the deck building of Thunderstone Advanced by Alderac Entertainment Group.  It is pretty much your standard affair.  You start with a starting party to go in to the caves to fight a boss and his minions.  On your turn, you can visit the town to gather new equipment, heroes for your party, spells or items to help you along the way.  When you think you are tough enough, you start killing monsters.  There is even an action of resting that allows you to keep certain cards then draw new cards hoping to get that devastating combo that monsters will cringe at.  The theme is so great in this game and I just love developing characters that work well.  Grant owns this game and I kick myself for not being able to play it more.  I just heard they are reprinting this, I will be purchasing it immediately!  Such a solid game with great deck building.

I had heard rumors of this game and the deck building.  I watched some videos, and must admit that the deck building aspect is not what got me interested.  The Dig Dug arcade style player interaction was.  This was a hard to find game from Games Factory Publishing, but when I found one for a reasonable price I grabbed it.  The unique part of the deck building in this game is that every one has their own deck to buy from.  They all have similar abilities but it depends on what you want to specialize in.  Some stacks specialize in bombing, others in drilling, and the more of each type of person you purchase the more points they are worth at the end of the game.  Gavan Brown and Matt Tolman did a great job giving you decisions to make.  Do I specialize in one area, making it more difficult to drill in some areas but get more points, or do I spread out and do a little from each so I can drill more but have fewer points but more people.  The fact that there are 4 different decks to play and each have their different focus is awesome!  I also love the mechanism on how you buy the cards.  When ever you gain money from mining you have to place all the money on one card you want to buy.  If you over pay, tough….no change for you!!  You might also put money on a card early but then decide you don’t want it anymore….tough, can’t move money around.  I am extremely happy with the deck building in Super Motherload! 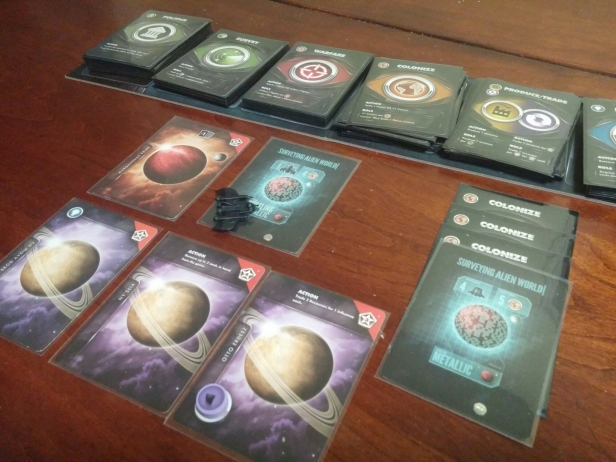 I absolutely love the deck building in Seth Jaffee’s Eminent Domain!!  It is so smooth, straight forward and rewarding.  In the middle of the board there are 6 different piles of cards.  On your turn, you choose one of those actions to take and put that card into your deck.  It is so easy to focus on one specific role.  If you want to colonize more planets….choose colonization.  If you want to attack more….pick the military.  It is also so easy to get rid of cards you don’t want.  Before your role, you get to choose an action…and one of these is discard 2 cards from your hand.  So, if you want to use military and you don’t need colonization…get rid of them so you can get your military more often!!  Not only that but the game ends when one of the stacks in the middle are depleted.  So, if multiple people are going military, the game is going to end quickly!  I also need to mention that when you choose a role….everyone else gets to do that role also.  I just love everything there is about the deck building in Eminent Domain!